The highest ranking US official to visit Taiwan in nearly three decades has landed on the disputed island, and the world was watching.

More than 700,000 people tracked the aircraft of California Congresswoman Nancy Pelosi, who currently serves in the powerful Speaker of the House role that is third in-line to the presidency, as it arrived in Taipei after days of speculation as to whether or not she would go through with the trip. 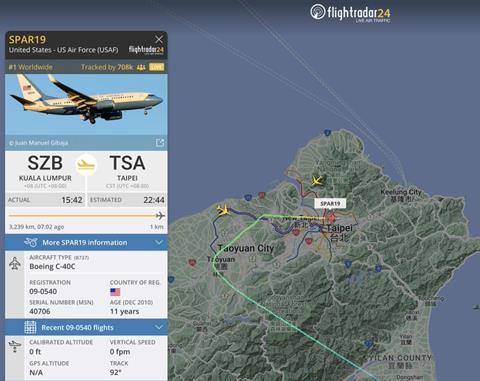 Chinese Communist Party officials in Beijing, who claim Taiwan as part of the People’s Republic of China, had been adamant that Pelosi not travel to the island and vowed a military response if the Speaker did so.

Pelosi landed without incident in Taipei aboard a US Air Force Boeing C-40C Clipper, a VIP transport aircraft commonly used by high-ranking US officials. The Clipper is distinct from Boeing’s VC-25A presidential aircraft, the heavily modified 747 commonly known as Air Force One when he is aboard. 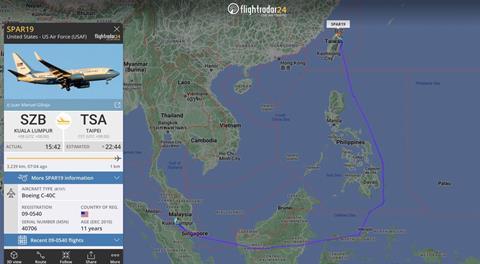 Shortly after confirming SPAR19 had touched down, FlightRadar24 revealed that the flight had set a record for the company’s most-watched ever.

“With 708,000 people tracking the aircraft upon landing in Taipei, SPAR19 is FlightRadar24’s most tracked live flight of all time,” the company said via Twitter.

Of note was SPAR19’s circuitous route from Malaysia to Taiwan, skirting the edge of the South China Sea, before overflying Indonesia and passing around the Philippines.

Imagery released by FlightTracker24 shows the flight path, which skips the obvious direct path to Taipei over the South China Sea, which is the epicenter of a militarised island-building campaign by Beijing and several territorial disputes between China and its neighbours.

Our visit reiterates that America stands with Taiwan: a robust, vibrant democracy and our important partner in the Indo-Pacific. pic.twitter.com/2sSRJXN6ST

Pelosi confirmed her arrival in Taipei, tweeting a photo showing herself standing in front of SPAR19 on the dark airport apron.

“Our visit reiterates that America stands with Taiwan: a robust, vibrant democracy and our important partner in the Indo-Pacific,” Pelosi says via Twitter.

In response, officials in Beijing say China will stage a series of military drills near Taiwan, including the firing of live munitions from the Taiwan Strait.