U-2 to get avionics, mission computer update 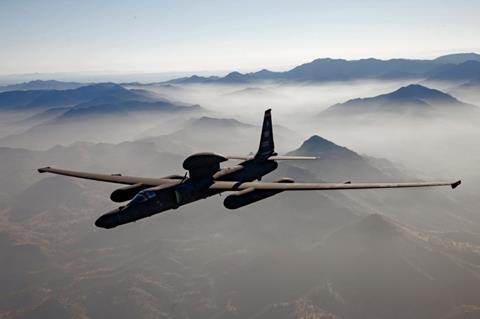 “As a proven, agile and reliable aircraft, the U-2S is the most capable high-altitude ISR system in the fleet today,” says Lockheed’s U-2 program director, Irene Helley. “The Avionics Tech Refresh contract will continue our commitment of providing a premier aircraft to our warfighters, ensuring global security now and into the future.”

The work will see the U-2 be the USAF’s first OMS-compliant fleet. Lockheed expects interim field to start in mid-2021, with fleet modification to follow in early 2022.

Cirium fleets data shows that the USAF has 30 in-service U-2S aircraft, while NASA operates two examples. The average age of the overall fleet is 36.6 years.

The Lockheed announcement follows a string of recent news involving the U-2, a type that first flew in 1955. In February Lockheed announced that the fleet had completed flight testing and installation of the Collins Aerospace Senior Year Electro-Optical Reconnaissance System (SYERS-2C).

This provides improved tracking of both stationary and moving targets in a wider range of weather conditions.

In 2019 an F-35 fighter, U-2 and a ground station demonstrated a capability to shorten the decision loop involved in detecting and acting upon a long-range missile launch.

In the demonstration, called Project Riot, an F-35 detected a long-range missile launch with its on-board sensors. Via the U-2, it shared the information with the air defense commander on the ground, enabling the commander to quickly make the decision to target the threat.