The chairman of the UK's cross-party parliamentary Defence Committee has taken the unusual step of making public its concerns over a possible plan to replace the Royal Air Force's fleet of Boeing E-3D Sentry airborne warning and control system aircraft.

On 3 July, the committee published a letter sent by MP Dr Julian Lewis to minister for defence procurement Guto Bebb on 26 June, referencing "recent reports concerning the potential replacement of the Royal Air Force's E-3D Sentry AWACS aircraft, and in particular the suggestion that a decision on a replacement system may be taken without a competitive tender in favour of the Boeing E-7 Wedgetail aircraft". 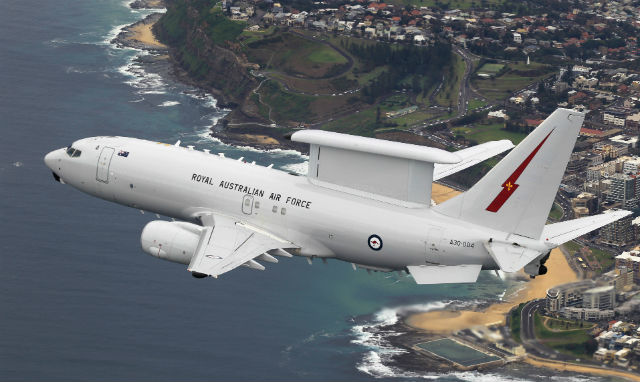 "In the light of the convincing evidence we have received of at least one highly credible alternative to the Wedgetail, we can see absolutely no reason to dispense with an open competition," the correspondence notes.

While the committee does not identify any other potential systems, a likely candidate could be Saab's GlobalEye development of the Bombardier Global 6000 business jet, which is now in development for launch customer the United Arab Emirates.

The committee also voices concern over the poor state of the RAF's existing AWACS assets, citing "a continuing decline in the availability, readiness and number of flying hours completed by the aircraft".

It cites anecdotal evidence pointing to "a poor state of maintenance… [with] only one of the six aircraft in the fleet available for frontline service at any one time". It also notes: "The poor maintenance and support of this capability over a number of years is greatly to be regretted."

Lewis also used the letter to raise objections over placing a major order with the US manufacturer at this time. "It would be particularly inappropriate for a competition to be foregone in favour of Boeing, following their involvement in the imposition of punitive tariffs against Bombardier last year. At the time, the then defence secretary indicated that Boeing's behaviour would put their ability to secure future defence deals at risk."

A US review process ultimately rejected the threatened imposition of roughly 300% tariffs on imports of Bombardier's CSeries narrowbody, and the programme was on 1 July transferred to Airbus control.

Australia (6), South Korea (4) and Turkey (4) have all acquired the 737-based surveillance asset, which uses a Northrop Grumman multirole electronically scanned array radar installed in a "top hat" array above its fuselage. Deliveries have already been completed under these orders.

Making a non-competitive acquisition of the 737NG-based system would be an unusual step for the UK to take. While it has previously acquired Boeing C-17 strategic transports and ordered 737-based P-8A Poseidon maritime patrol/anti-submarine warfare aircraft via the US government, the E-7 is not operated by the US Air Force.

The Royal Australian Air Force is scheduled to send one of its Wedgetail aircraft to the UK to appear in the static display at the Royal International Air Tattoo at RAF Fairford in Gloucestershire from 13-15 July – immediately preceding the Farnborough air show.