The Ukrainian air force has more fighter jets in its fleet today than it did two weeks ago.

That is according to US Defense Department spokesperson John Kirby who made the revelation at a press conference in Washington, DC on 19 April.

“They have received additional aircraft and aircraft parts to help them get more aircraft in the air,” Kirby says, addressing the status of fighting in Ukraine and ongoing aid shipments to the country’s armed forces.

Kirby went on to clarify that the aircraft in question are fixed-wing fighters. 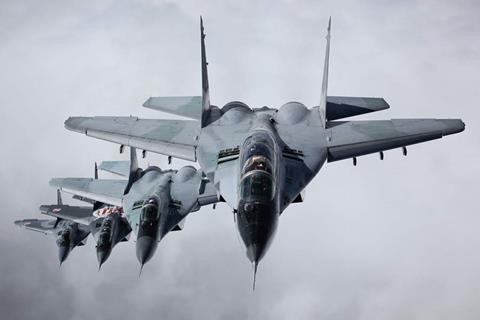 The Pentagon declined to specify which airframes are being sent to Ukraine or who is providing them. However he did note that “other nations who have experience with those kinds of aircraft have been able to help [Ukraine] get more aircraft up and running”.

When it comes to heavy equipment, the USA and other western countries resupplying Ukraine’s armed forces say they prefer to send Soviet Bloc equipment with which the Ukrainians are already familiar. Several NATO members operate Soviet-era inventory in their air forces, including MiG fighter jets and S-300 air defence systems.

In March, Poland offered to provide its entire fleet of Mikoyan MiG-29 Fulcrum fighters to Ukraine, in return for receiving Lockheed Martin F-16 Falcons from the USA.

That deal eventually broke down, with American officials dismissing the plan as “untenable”. The Biden administration and other NATO leaders have thus far been hesitant to overtly send heavy weapons like jets or tanks into Ukraine for fear of provoking Russian retaliation outside of its besieged neighbour.

However, the USA has assisted in shipping spare aircraft parts into Ukraine according to Kirby, which says has contributed to the recent increase in capability. America has also provided Ukraine with hundreds of Switchblade “kamikaze” drones and 11 Soviet Mi-17 utility lift helicopters, previously destined for the now-defunct Afghan air force.

Despite those gains, Ukrainian airmen still face a daunting challenge. Speaking separately on background, a senior Pentagon official says despite losses during the first stage of the war, Russia still has a majority of its pre-war fixed-wing aircraft and “a great majority” of rotary-wing assets still available.

However, that advantage has still not translated into air dominance in the conflict. American defence leaders say the airspace over Ukraine remains contested and they describe Ukrainian forces’ air defence efforts as “viable, active, and energetic.”

Evidence of the effectiveness of Ukrainian air defences can be seen in the conservative tactics of Russian pilots. Outside analysts say the Russian air force has significantly underperformed western expectations at the start of the conflict, largely avoiding complex and riskier sorties into Ukrainian airspace.

Speaking on 19 April, a senior defence official in Washington says the trend observed during fighting in northern Ukraine over recent weeks appears to be present in Russia’s renewed push from the east.

“We continue to see sort of a similar wariness by Russian pilots…where they either will not enter Ukrainian airspace before launching their strikes or they will skirt briefly inside Ukrainian airspace and then immediately egress out of that airspace,” they say.

In the face of this constraint, Russia made heavy use of unmanned cruise missiles for air support. The Pentagon estimates that as of this week Russia has launched more than 1,670 missiles into Ukraine, often from naval ships in the Black Sea and Caspian Sea.

In 2015, Russia struck targets in Syria with cruise missiles launched from the Caspian Sea, a distance of roughly 930mi (1,500km).