The US Air Force (USAF) began offering cash bonuses for its aviators on 11 April, as part of the service’s effort to close a multi-year pilot shortage.

USAF chief of staff General Charles Brown says in a written statement the payments are among the “variety of tools” the service is using to improve recruiting and retention. 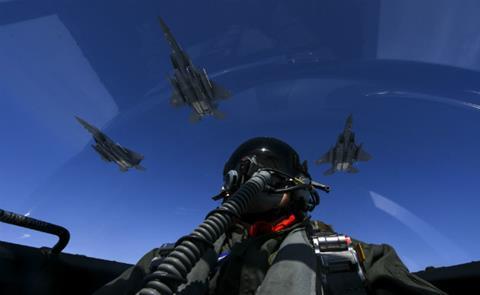 “Our operational readiness hinges on retaining a force of skilled and experienced aviators,” the air force’s top officer notes.

This is not the first year that the air force has offered the aviation bonus programme, which is open to active-duty aviators in multiple fixed-wing specialities including fighter, bomber, mobility, special operations, electronic warfare, and combat search and rescue. Fliers of rotary-wing and remotely operated aircraft are also eligible.

The value of the retention payments varies based on seniority and specialisation, but can range from $15,000 to $35,000 per year for contracts of anywhere from five to 12 years. Some officers can receive up-front, lump sum payments as high as $200,000.

The application window for the current iteration of the programme runs from 11 April to 31 August.

The air force has undershot its target number of pilots for several years. A 2020 report from the Department of the Air Force noted that the service was operating with 2,100 fewer pilots than its overall goal of 21,000 the service has said were required to execute the official national defence strategy.

The shortfall of military aviators is not unique to the USAF, but it does account for the bulk of the deficit. A 2019 report to the US Congress identified that the broader US military was more than 3,000 pilots below full-strength.

Now airlines are struggling to re-staff amid surging consumer demand for travel. A single major airline may hire 50-70 pilots every week, according to an estimate by management consultancy Oliver Wyman.

Those commercial carriers are in direct competition with the USAF for qualified pilots. A 2016 study from the RAND Corporation found a positive correlation between US airline hiring and the separation of aircraft rated officers from the USAF.

Whether that trend will continue in the post-pandemic era remains to be seen. Airline job losses and uncertainty during the worst parts of the coronavirus crisis likely boosted retention efforts within the military.

While sizeable cash bonuses, combined with a generous military retirement package, may be enough to sustain the progress, staffing headwinds are picking up. On top of stiff private sector competition for qualified aviators, military recruiters in the USA more broadly tend to struggle during periods of strong economic growth and low unemployment.

Although the USAF says it met its recruiting goals at the end of 2021, larger services like the US Army are reportedly already finding it difficult to meet targets for new recruits.