The US Air Force (USAF) will spend nearly $5 billion over 10 years to develop an engine for its future generation of air superiority fighters.

The US Department of Defense (DoD) said on 19 August that the USAF awarded five contracts, each worth $975 million, to fund research and development of a propulsion system for “future air-dominance platforms”. 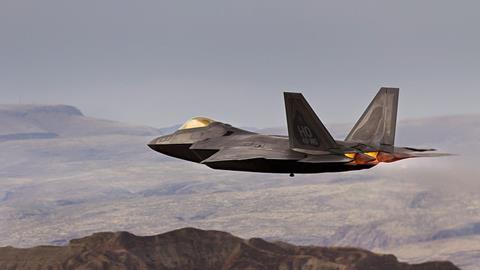 The firms have a general timeline of completing the design and prototyping phase of development by 2032.

The concept behind a so-called “adaptive engine” is a powerplant that, unlike fixed-cycle engines, can seamlessly adjust internal airflow and pressure to allow for both highly fuel-efficient long-range cruising and the high levels of thrust and acceleration needed for air combat.

US officials have not disclosed details about the development effort, and the Pentagon did not immediately respond to a request for more information.

But the NGAP programme shares a similar name as a secretive USAF effort to design a sixth-generation fighter, known as the Next Generation Air Dominance (NGAD) programme. Pentagon officials have revealed little about NGAD and what concepts they are exploring to replace the USAF’s current Lockheed F-22 Raptor air superiority platform.

However, senior leaders in industry and the military, including Air Force Secretary Frank Kendall, have speculated that NGAD will not just be a single aircraft, but a family of paired systems, potentially including unmanned or autonomous air vehicles.

According to the DoD contract announcement, the NGAP programme also has the goal of “digitally transforming the propulsion industrial base”. Earlier this month, a USAF official whose portfolio covers propulsion systems and issues warned that the USA was in danger of falling behind in development of transformative aircraft engines for military applications.

John Sneden made the remarks while speaking at a conference in Dayton, Ohio. He specifically noted that with only two US firms with military contracts to develop an adaptive engine, the viability of the USA’s advanced propulsion industrial base would be uncertain and at risk of “collapse”.

In addition to the new NGAP programme, the US military has funded development of an adaptive military engine under a separate effort called the Adaptive Engine Transition Program (AETP). Through that effort, the USAF in 2016 awarded GE and P&W roughly $1 billion each to develop improved powerplants for the single-engined Lockheed F-35 strike fighter.

There is substantial debate within Congress and the Pentagon about whether the cost of such a retrofit is worth the performance improvements. P&W is pushing an alternative proposal to perform a core upgrade on the F-35’s existing engine, the F135, which the company produces.

In a recent interview with FlightGlobal, the head of P&W’s F135 engine division, Jennifer Latka, suggested that her firm’s AETP engine could be used to power a sixth-generation fighter instead.

With the launch of NGAP and only lukewarm support in Washington for a new F-35 engine, what will become of the GE XA100 and P&W XA101 AETP engines remains to be seen. However, the technologies matured by the two AETP contenders could see new life under the latest sixth-generation programme.