The US Air Force (USAF) is studying using a suborbital sounding rocket to test materials, sensors and flight controls at hypersonic speeds.

Exos Aerospace Systems and Technologies, maker of the commercial Suborbital Autonomous Rocket with Guidance (SARGE), was granted an $50,000 Small Business Innovation Research phase I contract by the service to examine whether its sounding rocket can be repurposed for hypersonic testing, the company says on 27 March. 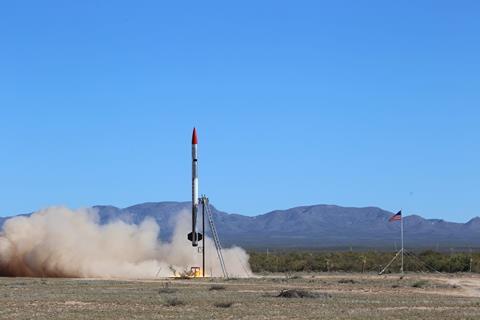 The USAF wants to know if a redesigned SARGE can perform hypersonic test flights between Mach six and nine. The service is developing a range of hypersonic missiles and needs cheap and easy ways to test components.

Exos Aerospace’s usual line of work is attempting to use its sounding rockets to shoot experiments into suborbital space on behalf of corporations and educational institutions. The company tries to recover the SARGE vehicle after launch using a GPS-guided parachute system. Reusing rockets, rather than building models from scratch each time, is intended to keep costs down.

So far, the company has struggled to reach suborbital space with several launches not reaching the altitude objective due to issues such as structural failures and guidance problems.

Sounding rockets are small test vehicles, often used by NASA to carry scientific payloads to heights between 158,000ft to more than 800mi above the sea level. The rockets can only put payloads into space for very short periods of time, typically between five minutes to 20 minutes, but are cheap to launch.

The startup says a glider with a 15.2m (50ft) wingspan could carry SARGE aloft under its wing while it is being towed to 40,000ft in altitude by another aircraft. At that height, the glider is released from the towing aircraft and powered to 50,000 – 55,000ft using an internal rocket engine. Once the powered glider reaches its terminal altitude, the underslung rocket payload is dropped and fired.

“[SARGE] goes M3 plus now [when launched from the ground]. If we change trajectories the current vehicle will do close to M4, so it’s almost reaching that hypersonic realm,” says John M. Quinn, chief operating officer of Exos Aerospace. “The [Small Business Innovation Research] study was basically to make it a lightweight version of what we’ve got now. And from the ground, that puts it at almost M5 based on our preliminary design work. Launching from the air moves it up near M9.”

Thinner air at 50,000ft or more, combined with a lighter rocket, should make hypersonic speeds possible, he says.

The glider mothership that Exos Aerospace is centering its plans around is to be designed and built by Fenix Space, says Quinn. Fenix One, as the first glider would be called, is based on intellectual property licensed from NASA’s Towed Glider Assisted Launch System experiment.

Quinn claims the Italian government’s venture capital fund, Invitalia Ventures, has helped invest $93 million into fund a joint venture between Exos Aerospace and Fenix Space to develop and build a low Earth orbit satellite launcher in Italy based on the towed glider concept. That launcher could also be used to launch hypersonic test vehicles, he says.

Exos Aerospace’s study follows a similar US Air Force Research Laboratory effort already underway to air-launch a hypersonic test rocket, the X-60A, from underneath a Gulfstream III business jet. That rocket completed a test firing on the ground in January 2020.