The contract announced by the Department of Defense (DoD) on 25 November, valued at $99.3 million, covers 42 production radars and three spare kits for the USAF’s fleet of Lockheed Martin F-16 fighters. 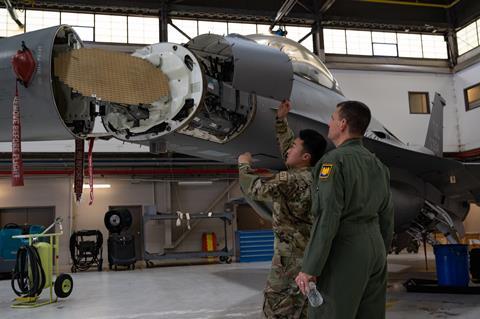 The latest F-16 AESA acquisition represents a modification option to a larger contract with Northrop, worth some $1.3 billion in total.

The advanced radar allows pilots to “detect, target, identify, and engage across a spectrum of threats at longer ranges and react with greater precision”, the USAF says.

An AESA array substantially increases the combat power of the aircraft, compared to the previous APG-68 fire control radar.

“With the AESA radar… I can target more things than I can shoot,” says Lieutenant Colonel Michael Trujillo, an F-16 pilot with the Washington DC Air National Guard.

The service notes that the AESA radar and other upgrades “revitalises” the older F-16 type and allows such legacy aircraft to better integrate with the newer fifth-generation types like the Lockheed Martin F-35 and F-22.

“This effort is a big deal for the [USAF],” Oryan Joseph, programme manager with the Air Force Life Cycle Management Center, said in March. “In order for us to keep the F-16 in the fight performing all its different roles for our combatant commanders, we must significantly modernise the fleet.”

Despite first entering service in 1979, the single-engined fighter first produced by General Dynamics and later Lockheed, remains widely popular around the world.

In fact, with an active fleet of 2,184 aircraft, the F-16 is the top active combat jet in the world, according to the 2023 FlightGlobal World Air Forces directory.

That represents a massive 15% of the world’s total combat aircraft fleet; more than double the nearest competitor: the Sukhoi Su-27 and its derivative types.

Demand for the type has proven so strong that Lockheed recently established a new final assembly line in Greenville, South Carolina to produce the F-16 V-model, or Block 70/72.

The Royal Bahraini Air Force (RBAF) will have the distinction of taking the first jet off that line. The island country in the Persian Gulf currently operates 21 F-16C/D variants and will purchase 16 new builds under a 2018 contract.

In addition to Bahrain, four other countries have so far signed firm contracts to acquire the Block 70 and Block 72 aircraft, with their combined commitments totalling 128 jets.

Along with Bahrain, these buyers include Morocco (24) and Taiwan (66), plus two future new operators: NATO members Bulgaria (8) and Slovakia (14).