US military to explore use of sustainable aviation fuel

The US military is set to expand its use of sustainable aviation fuel (SAF), a low-carbon biofuel substitute for traditional petroleum-based jet fuel.

A fiscal year 2023 defence spending agreement published on 6 December requires the US Department of Defense (DoD) to prepare a plan for increasing the production and use of SAF in the Pentagon’s aviation operations. 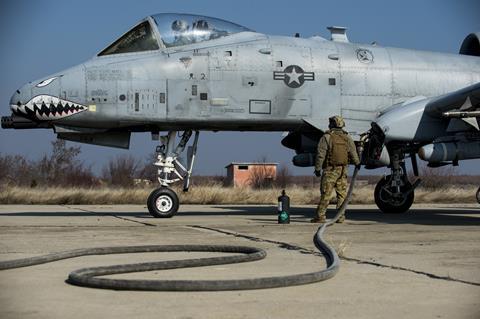 A Fairchild Republic A-10C Thunderbolt II with the USAF’s 74th Expeditionary Fighter Squadron receives fuel during forward area refuelling point (FARP) training at Plovdiv, Bulgaria in 2016. A single A-10 usually receives approximately 907kg (2,000lb) of fuel in five to seven minutes during FARP training, according to the USAF

Under the 2023 National Defense Authorization Act (NDAA), the DoD will have one year to identify at least two “geographically diverse” sites within the current US military footprint to carry out a pilot programme on SAF use.

At least one of the identified test sites must also include an onsite refinery that can be used to produce SAF.

Congress is also seeking to assist the commercial aviation industry’s transition to SAF with the military pilot programme. The requirement written into the FY2023 NDAA states the refinery site must be “located in proximity to not fewer than one major commercial airport that is also actively seeking to increase the use of sustainable aviation fuel”.

That SAF could be powering military aircraft before the end of this decade. Following the initial one-year period to identify test sites, the DoD is required to generate a plan for using a jet fuel blend containing at least 10% SAF by 2028.

The 10% requirement will only apply to the aviation facilities identified for hosting the pilot programme, not the entire force.

Under the rules set out by Congress, the SAF used by the Pentagon must be produced in the USA from “domestic feedstock sources”.

“Such fuel shall constitute drop-in fuel that meets all specifications and performance requirements of the [DoD] and the armed forces,” the legislation also states.

Congress specifies several goals for the pilot programme, including assessing the impact on overall fuel costs, determining the infrastructure and logistics requirements for widespread adoption of SAF within the military, recommendations for how to increase SAF use in non-military aviation, assessing any changes in aircraft performance resulting from the incorporation of SAF blends, and environmental impacts of increased SAF use.

While the initial targets for SAF integration are modest, they could pave the way for much greater use of SAF by one of the world’s largest consumers of jet fuel and carbon emitters. 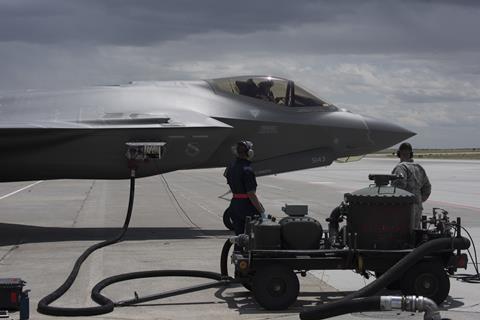 Research by Neta Crawford published in 2019 for Brown University found the US military to be the largest institutional user of petroleum and correspondingly the largest producer of greenhouse gas emissions in the world, during the period ranging from 2001-2017.

However, not all of that fuel consumption can accurately be attributed to aviation operations. The DoD in 1990 replaced the use of diesel fuel with its JP-8 blend of jet propellant for US military land vehicles.

Although the Pentagon is poised to move forward on the adoption of SAF, other military forces already appear much farther along in the process.

The UK Royal Air Force (RAF) in November successfully flight-tested a 100% SAF blend on one of the service’s Airbus Defence & Space A330 Voyager tanker/transports. Air Chief Marshal Sir Mike Wigston has set the goal of making the RAF the world’s first carbon net-zero air force by 2040.

The commercial aviation industry is also rapidly advancing the use of SAF. In October, United Airlines invested in a biofuel refinery, while Canadian operator WestJet in November committed to using SAF on 40 flights between Calgary and San Francisco over the coming months.