The USA has a range of options for making its military airfields and aircraft more resilient to attack in the event of conflicts against an advanced adversary.

That is according to a new analysis from Washington DC think tank Rand Corporation, which concludes that the US Air Force (USAF) and allies in Europe and the Indo-Pacific region should pair “active” air defences with so-called “passive” measures to adequately protect against precision strikes. 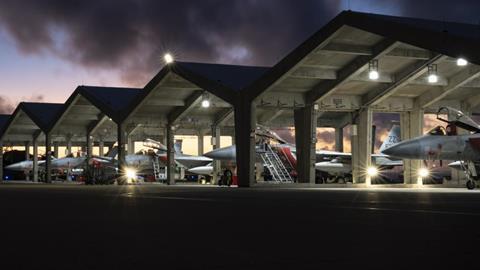 US Air Force Boeing F-15Cs parked under aircraft shelters at Kadena air base in Japan. Hardened shelters designed to withstand missile attacks are increasingly described as critical to the USA’s ability to protect air assets

Rand’s report, released on 17 January, lays out a strategy aimed at improving air-base “resiliency” – a term it defines as “the capacity of a force to withstand attack, adapt and generate sufficient combat power to achieve campaign objectives in the face of continued adaptive enemy action”.

The report says US adversaries such as China have adopted strategies designed to hamper the USAF’s abilty to generate combat power by inflicting early crippling strikes.

“China could strike US and partner-nation air bases, air and missile defence systems, and command centres with large ballistic and cruise missile raids,” Rand says. “The missiles and their sub-munitions could be optimised for attacking runways or destroying aircraft on parking ramps.”

Another Washington think tank, the Center for Strategic and International Studies (CSIS), drew similar conclusions in its own series of war games examining a theoretical invasion by China of Taiwan, published on 9 January.

Lead author Mark Cancian said that during most of 24 scenarios evaluated by the CSIS, the USA and allies lost “hundreds of aircraft”, with 90% of losses occurring while aircraft were parked on the ground.

Cancian told FlightGlobal that American air bases in Guam and Japan would be high-priority targets for China should conflict erupt, and that those facilities are “very vulnerable to Chinese missile attack”.

The Rand report builds further, noting that a similar – albeit less-advanced – capability from Russia threatens NATO air bases in Europe.

Protecting large air bases – which can easily be observed by satellites ahead of conflicts – is a critical challenge for the USA, which relies on such installations to project power far from its home territory, Rand’s report notes. Facilities with just one runway or fuel storage site present different concerns from those with redundant infrastructure.

One defensive strategy, according to Rand, involves massing air defence systems that can shoot down incoming missiles. However, such systems are expensive, inherently limited in number, constrained by supply limitations and subject to destruction by enemy forces. 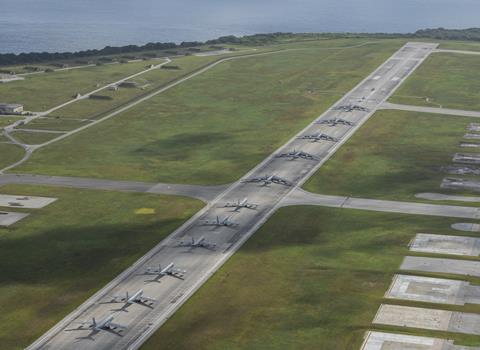 Boeing B-52 bombers and KC-135 Stratotankers at Andersen AFB on Guam. The airfield is predicted to be critical in any conflict between the USA and China

A more cost-effective solution, according to Rand, is to combine active systems that can shoot down incoming missiles with passive defensive measures. These can include aircraft shelters hardened against attack, use of camouflage and redundant fuel supplies, rapid runway repair capabilities, dispersing parked aircraft on the ground, and having large stocks of prepositioned munitions.

The report’s authors also say that widely distributing aircraft and other critical infrastructure within large bases, such as Kadena in Japan, will greatly enhance the USAF’s resilience to attack.

ACE IN THE HOLE

Despite Rand’s conclusions, the USAF has been vocal about pursuing a different strategy. Under a concept service leaders call Agile Combat Employment (ACE), the USAF is exploring how to conduct air operations from numerous, highly distributed small airfields – rather than from a few large bases.

“ACE is designed to make [the] problem harder for an adversary,” the USAF’s top civilian administrator Frank Kendall said during a policy speech in early 2022. “We have to figure out exactly the investments we need to make in the mix of defences, hardening, deception and proliferation.”

Rand is less optimistic about ACE. Its report acknowledges that some form of distributed operations could enhance the survivability of the USAF’s fleet but warns of serious logistics challenges.

The USAF’s “limited combat support capability” will constrain how many small, distributed airfields it can simultaneously operate, Rand says.

The report finds that larger bases are generally more resilient because they can mass repair, fuel and ammunition support – and disperse those assets, and aircraft, over a wide area.

“ACE should be one – but not the sole – US Air Force investment in enhanced air-base resilience,” Rand concludes.

Read the full report from here.