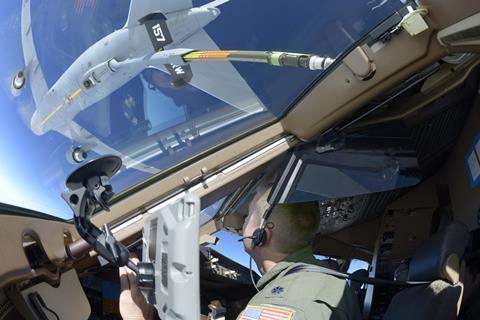 Air Mobility Command says the KC-46 Pegasus received fuel mid-flight from another KC-46 to complete its 36h endurance flight from Portsmouth, New Hampshire to Guam and back 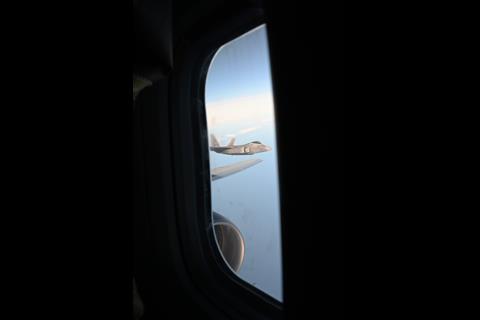 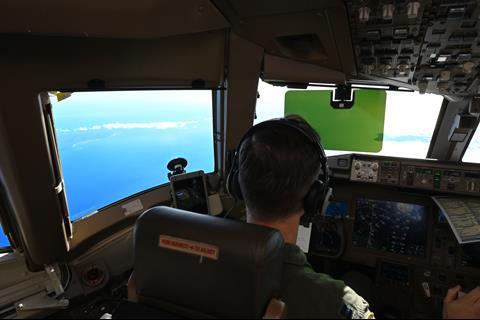 The KC-46, a derivative of Boeing’s 767, departed the US East Coast city of Portsmouth (New Hampshire), flew west across North America to Hawaii, circled the central Pacific island of Guam and returned to Portsmouth.

“This extended mission is yet another example of capable airmen taking charge and moving out to accelerate our employment of the KC-46A,” says AMC commander General Mike Minihan. “This total force mission boldly highlights the imperative to think differently, change the way we do business and provide options to the joint force.”

The AMC says the flight, which left Portsmouth with the call sign “Pack 93”, according to flight tracking service FlightRadar24, was the command’s “longest mission to date”.

The USAF is among the military services seeking to adapt standard procedures for a potential conflict in the Indo-Pacific region, which is expected to require operating over vast distances with minimal support. Military planners also expect such a scenario would feature persistent jamming of GPS and communications.

“We have to take a sharp departure from what we have grown used to over the past 30 years,” Minihan said in September at an Air & Space Forces Association (AFA) conference in Washington DC.

“AMC is committed to a deliberate approach to broaden the scope of KC-46A employment and its global command and control capabilities,” Renfro says.

Minihan, a Lockheed Martin C-130 transport pilot by trade, has been a vocal proponent of the KC-46, despite the jet’s protracted engineering challenges in multiple refuelling systems, including its boom and remote vision system (RVS).

“It’s incredibly capable”, Minihan said in September. He also admits there have been challenges to work through with the troubled Boeing jet, many of which have required aircrews to develop workarounds.

The Pentagon has hit Boeing with substantial financial penalties over delays and engineering failures on the KC-46 programme. The airframer is currently redesigning a new RVS system over intractable problems with the original.

Despite those issues, Minihan is optimistic about the ability of the KC-46 to add value to USAF operations. In September, he cleared the type for worldwide operational use, including in combat.

Minihan also said the AMC needs to make use of the KC-46 now, despite its drawbacks. “If I can put an incredibly capable tanker in the fight now, why wouldn’t I?”