China Southern to exit A380s by this year: Report

China’s sole Airbus A380 operator is reportedly retiring its fleet of superjumbos by the end of the year, becoming the latest carrier in the Asia-Pacific region to do so since the pandemic first struck.

An article that first appeared on Chinese media site Sohu — citing internal meeting documents — says China Southern Airlines has signed “relevant contracts” to exit its fleet of five A380s, after chalking up more than a decade of losses with the type. 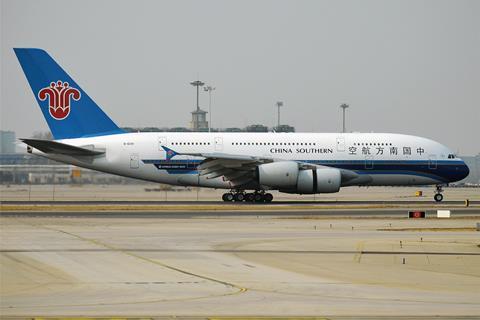 The report, which FlightGlobal has not been able to independently verify, comes nearly a year since the airline said it was reviewing the future of the superjumbos amid uncertainty about international travel recovery.

In mid-April 2021, China Southern senior vice-president of international and corporate relations Guoxiang Wu said the aircraft was “maybe…too large and the operation cost [is] very high”.

It was the clearest indication yet from the carrier, which had always been coy about the status of its small A380 fleet.

The Sohu report goes deeper into apparent challenges faced by the carrier in operating the A380, including its inability to secure operating slots for the type at Beijing.

In recent months — and amid a pandemic-driven travel decline — the A380’s excess capacity had also become an issue for the carrier, the article states.

China Southern signed for five A380s in 2005, becoming the first — and only — carrier in China to order the type.

The article, citing unnamed sources, claims that the carrier had hoped to operate the A380 on intercontinental flights from Beijing — its second hub and home to compatriot Air China.

The carrier had also hoped to get at least two A380s in time for the 2008 Beijing Summer Olympics, but “production issues and other reasons” had pushed the delivery timeline to the right. China Southern only took delivery of its first A380 in 2011, operating domestic flights for nearly a year before flying to Los Angeles in 2012, its first international route.

Still, the article states the aircraft had not been “the most economical” for the carrier.

“In the first few years of the introduction of the A380, China Southern Airlines has also been paying for the loss of the A380,” it adds.

By 2015, after scheduling changes, the A380 utilisation rate rose and it helped generate profits for the carrier.

During the onset of the pandemic, which was first discovered in China, China Southern was reportedly using the A380s on repatriation flights and on domestic flights with higher demand.

However, the excess capacity and operating costs still outweighed the benefits brought about by the aircraft, states the article.

Alongside China Southern, other carriers in Asia-Pacific, including Malaysia Airlines and Thai Airways, have retired their A380 fleet. Singapore Airlines, another A380 operator, has remained committed to the superjumbo, but has also cut its fleet size amid the pandemic.