As with all airline offices, there are plenty of aircraft models. Most are of types the airline has never operated, but which reflect Bangkok Airways' conservative approach to fleet development. Visitors get the impression that the library's conference table has hosted more than its share of aircraft pitches.

The carrier has its own building on the highway from Don Mueang International airport to central Bangkok. Directly across the highway is the headquarters of Thai Airways International. Although Thai is the more famous of Thailand's two full-service carriers, it has struggled in recent years against the relentless rise of low-cost carriers in the country’s domestic market; ever more competition on international routes; and constantly changing leadership. Bangkok Airways, by contrast, is a study in stability and focus, personified in its ebullient president, Puttipong Prasarttong-Osoth. 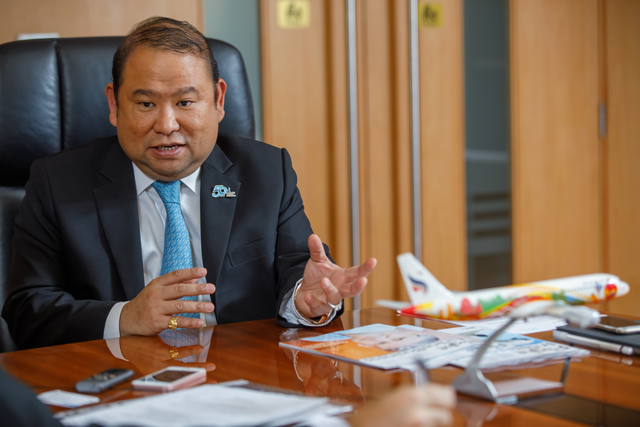 "From the start, Bangkok Airways aimed for tourists, and that has been our focus for the last 20 years," he says. "That's why we first looked at resort areas that offer either leisure or culture. Once we expanded and got bigger, we started flying to capital cities."

Thailand has leisure and culture in spades. Bangkok itself offers shopping, cuisine, and other pleasures. In the north there are the rolling hills around the historic city of Chiang Mai. In the south are the renowned resort islands of Phuket in the Andaman Sea and Koh Samui in the Gulf of Thailand. Just north of Bangkok there are historic 14th century ruins at Sukhothai and Angkorian ruins to the east at Phimai. As Bangkok Airways owns and operates the airport at Koh Samui – along with those at Sukhothai and Trat – it is uniquely well placed to capitalise on inbound tourism. But rather than fight the world's airlines on long-haul routes, it prefers to partner with them.

To serve this market Bangkok Airways operates 38 aircraft. These comprise 15 Airbus A319s, nine A320s and 14 ATR 72-600s. It has orders for an additional four ATRs.

"People ask why we don't go for long haul-flights and buy bigger planes," says Prasarttong-Osoth. "This is another area, and we would need more resources. It would also add complexity on the operation side. We just try to be the best at what we do here and focus on partnerships with other airlines. They have long-haul flights, we partner with them. They carry passengers to Bangkok, we carry them to the rest of Thailand or Southeast Asia."

As such, the carrier – which, despite the location of its headquarters near Don Mueang, operates from Bangkok's Suvarnabhumi – has no plans to order long-haul, widebody aircraft.

Not to say the airline has not flirted with the long-haul game. In 2006, Bangkok Airways ordered six Airbus A350-800s, prior to the programme's being recast as the XWB. With the redesign of the programme as the XWB, the carrier reduced its commitment to four. Subsequently, it cancelled the order in 2011. One of the more interesting models in the company's library is a Boeing 767-400, reflecting an old widebody pitch.

Bangkok Airways is not part of an alliance, and has codeshare arrangements with 29 other airlines. Major partners include Qatar Airways, Emirates, Thai Airways, Aeroflot, British Airways and Garuda Indonesia. In 2018 alone, Bangkok Airways has added a diverse trio of new codeshare partners: El Al, Oman Air and Lao Airlines. In late August, Jet Airways decided to place its code on nine additional Bangkok Airways services, with the Thai carrier in turn adding its code to several domestic Indian services operate by Jet. 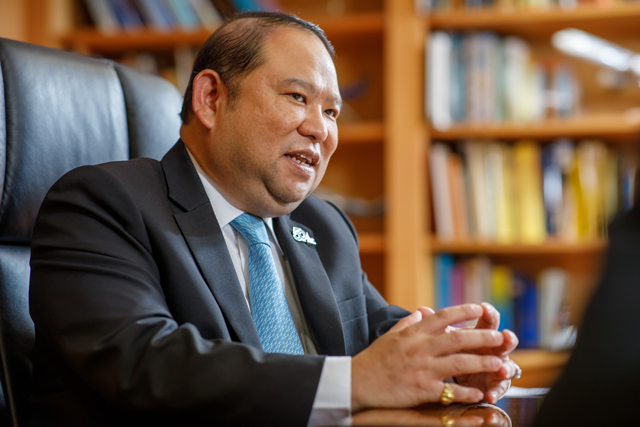 A major element in the carrier's attraction to partners is its extensive regional network. In this context, it is hard to overstate the importance of the Bangkok Airways' unparalleled access to Koh Samui, where it commands 88% of inbound seats.

In 2018, Bangkok Airways will operate 1.5 million of the 1.7 million seats operated to the island. This is followed by Singapore Airlines unit Silkair, which will operate 93,000 seats this year. Silkair also codeshares with Bangkok Airways on the Singapore-Koh Samui route. FlightGlobal schedules show that in September 2018, 23 carriers will codeshare with Bangkok Airways on the Bangkok-Koh Samui route, and 33 on the Bangkok Suvarnabhumi-Phuket route, where it has a 21.4% capacity share.

Indeed, around 80% of Bangkok Airways' passengers are on codeshares from other airlines. This insulates it somewhat from aggressive competition in the price-sensitive Thailand domestic market. While its load factors – 63.4% in its second quarter to 30 June – are well below those of other Thai carriers, its yields are higher.

While Bangkok Airways does not have pilot bases in Koh Samui and Chiang Mai, it stations aircraft in both locations overnight to provide early morning services into the Bangkok hub.

"When flights land in Bangkok, airlines need somebody who can spread their customers throughout the area," he says. "Sometimes airlines fly to Bangkok and try to extend flights to Cambodia, Vietnam and other places, but they might stop because distances are short and they are using big planes. It's better if they work with us. We treat everyone equally, on a first-come, first-served basis. Anyone can get access [to seats], but if the plane is full, it's full."

Given the importance of Koh Samui to the airline's revenues and profitability, the single biggest consideration in its fleet planning is the island's single 2,100m runway, which is hemmed in by roads, public beaches and waterways. Prasarttong-Osoth says that expanding it is all but impossible. A320s can operate from the runway, but only with prohibitive payload restrictions, hence the outsized role of the A319 in its fleet. The carrier wants to replace its A319s and A320s, the average age of which is 12.1 years, but Koh Samui limits its options.

Prior to Airbus's takeover of the Bombardier CSeries programme, he says the carrier was looking at the Airbus A319neo and CS300. Indeed, there are two CSeries models in the library, one in Bangkok Airways livery. In spite of Airbus's assuming control of the CSeries programme, Prasarttong-Osoth says that the carrier will elicit proposals for both the A319neo and the re-branded A220-300. Boeing could potentially pitch the smallest variant of the re-engined 737, the 737 Max 7.

"The A319neo and [A220-300] are about the same size, but if you look at specifications and operating capabilities, probably they can compete with each other." 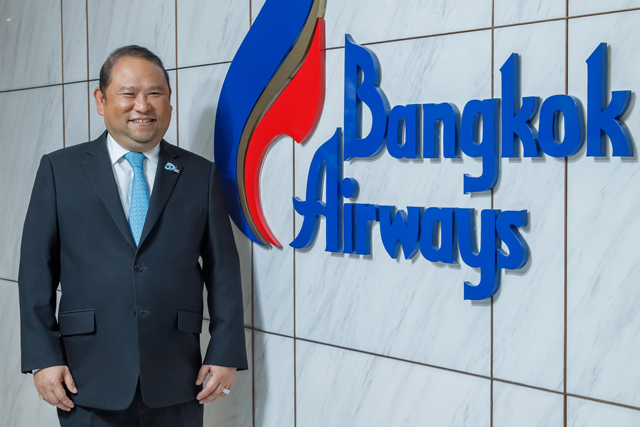 On whether Bangkok Airways should look at regional jets, Prasarttong-Osoth feels that such aircraft are too small for the airline's core Koh Samui routes. They are also too large to replace the carrier's ATRs on thin regional routes, where a higher priority is placed on frequencies to feed its Suvarnabhumi hub.

While the airline has stated in the past that it is in no rush to replace its 15 A319s and nine A320s, it is well aware of rising fuel prices. Prasarttong-Osoth says fuel consumption is a big concern, irrespective of whether the price is high or low.

"Sooner or later we have to get to [fleet replacement]," he says. By late 2018 or early 2019 the carrier will be in a position to decide. "We'll need go back and talk to the manufacturers and see the delivery programme, delivery slots, and how to arrange deliveries."

Prasarttong-Osoth adds that the carrier is very happy with the performance of its 14 ATR 72-600 turboprops, particularly at more spartan airports.

"The aircraft is self-contained. It's in and out... You can just land and load the plane. You don't need much ground equipment.”

He is, however, dubious on proposals for larger, 100-seat turboprops. He believes such aircraft would be more complicated to operate, burn more fuel, and start overlapping with smaller narrowbodies.

Taking a cue from the success at Koh Samui, Bangkok Airways also has plans to substantially upgrade Trat airport, which would allow it to take narrowbody airliners, and wants to create an MRO hub at Sukhothai.

"In the future Trat will be popular among tourists," says Prasarttong-Osoth. "It is close to the sea, and close to a big island called Koh Chang, which is a very interesting place. We have plans to extend to build new terminals, which will be able to take [Airbus] A319s and A320s."

On specific plans for Trat, Bangkok Airways declined to comment, citing confidentiality. The airport is located in the southeast of Thailand near the Cambodian border. It has a single 1,509m (4,951ft) runway (05/23) and a small terminal.

FlightGlobal schedules data shows that Bangkok Airways is the sole operator to Trat, operating three flights daily from Bangkok Suvarnabhumi, all with ATR 72-600s. On a monthly basis, the carrier's total capacity to the airport is 6,300 seats. Bangkok Airways' capacity growth to the airport has been moderate, rising from 57,000 seats in 2005 to a projected 79,000 seats in 2018.

In addition, Bangkok Airways plans a new hangar at Sukhothai that will be able to hold two A320s. This will add to a hangar in Bangkok that can service one aircraft, says Prasarttong-Osoth. In the past, the airline used to perform maintenance work on ATRs for other operators, but it is too busy with its own fleet to handle third-party work.

"We are quite busy for own servicing, with only one hangar that's always full," he says. "We have no time at the moment, but we plan new facilities in Sukhothai for maintaining our aircraft, and we can take third-party service. It's our plan to apply for EASA [European Aviation Safety Agency] Part 145. We will start on our own [aircraft] first, and we should have room to expand and some space left. When everything is settled, we should be able to accept third-party [work]."

The hangar design has been drawn up, and Prasarttong-Osoth expects construction to commence at the end of 2018. In addition to ATR work, the new facility will also be able to provide services for A320-family jets.

The airline does have its share of challenges. One issue is infrastructure, with the main international airport at Suvarnabhumi operating over capacity. Prasarttong-Osoth says that while Airports of Thailand is working hard to speed things up with plans for a second terminal, the country's infrastructure is not keeping up with booming traffic, particularly given Thailand's success in attracting Chinese tourists in recent years.

Another issue is sustainability. While Thailand has beautiful attractions, there are public concerns that large numbers of tourists will overwhelm certain locations.

"If we're aware of the problem then we can make arrangements to accommodate it," he says. "It's important not to let things go too far and beyond control. Thailand has many places to visit, and the government is proposing secondary cities away from popular destinations such as Chiang Mai, Phuket and Krabi.

"Lampang, Trat, Sukhothai and Meh Hong Son are interesting to visit, but have few tourists. The government wants to expand traffic into these destinations."

A truism of the aviation industry is that size, above all, is what matters. It delivers economies of scale, pricing power, and the ability to strong-arm aircraft manufacturers and lessors. Bangkok Airways disproves this, with a niche strategy based on co-operating with the world's airlines, and an indomitable presence in one of Thailand's most popular beach destinations. While the likes of AirAsia and Lion Air dominate Southeast Asia, Bangkok Airways has its small, important place.