JetBlue Airways will delay retiring its Embraer 190 regional aircraft as it assesses the post-coronavirus demand environment and how its new “Northeast Alliance” joint venture with American Airlines will shake out.

Speaking during the New York-based company’s quarterly earnings call on 27 July, JetBlue acting chief financial officer Ursula Hurley says the airline’s 30 leased E190s – all from GECAS – will leave the fleet between 2023-2026. The other 30 of the type, which the airline owns, will remain with the airline.

JetBlue and American started collaborating on their joint venture – which is focused on the busy hubs of Boston and New York – earlier this year. 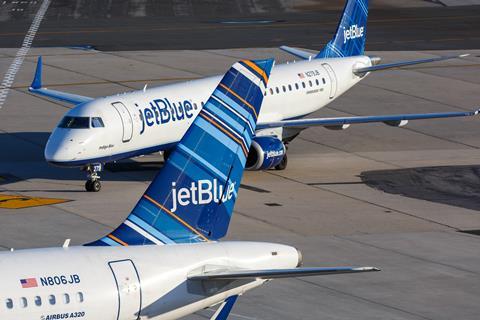 “We have delayed the retirement of the 30 owned aircraft,” Hurley says. JetBlue will “evalute… the most optimal time to retire those aircraft” based on factors including the jets’ costs and the American joint venture.

She adds that the company is “making investments in that fleet type to ensure that we can grow margins and capitalise on the [joint venture] opportunity”.

According to Cirium fleets data, JetBlue’s E190s are an average of 12.7 years old.

In March, sources said JetBlue had been looking at potentially selling and leasing back the 30 owned E190s as it sought to transition the regional jet out of its fleet in favour of Airbus A220s.

JetBlue took delivery of two A220s during the second quarter and now has four in service. It expects four more to join the fleet by the end of September. Cirium data show the carrier has 66 of the type on order with Airbus.