Lufthansa Cargo will in October retire its last remaining Boeing MD-11 freighter after operating the the trijet type for more than two decades.

Cirium fleets data shows that Lufthansa Cargo’s MD-11F operation grew from the initial five aircraft had entered service during the first year to 14 in 2003, all powered by GE Aviation CF6-80C2 engines. 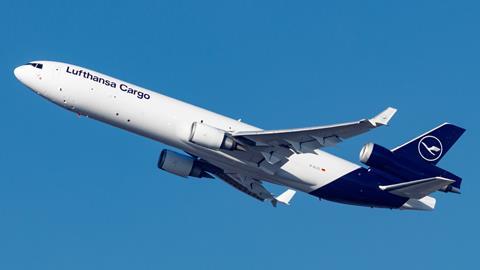 Lufthansa Cargo’s last MD-11, D-ALCC, will be retired in mid-October

From the peak, Lufthansa Cargo’s MD-11F fleet declined to 16 aircraft during the global financial crisis in 2009, but then rose to 18.

The airline’s first 777F entered service in 2013. Lufthansa Cargo initially introduced five of the GE90-powered twinjets and kept that fleet stable until 2018.

Since then, the airline has converted five 777F options and, most recently, sourced an additional 777F from the second-hand market. The latter aircraft (D-ALFJ) was manufactured in 2011 and originally delivered to Emirates. It is managed by DAE Capital.

Meanwhile, Lufthansa Cargo’s MD-11F fleet declined from 12 aircraft in 2018 to a single unit today. That aircraft (D-ALCC) was built in 1998 and will operate its last scheduled service with Lufthansa Cargo to its Frankfurt base on 15 October, the carrier says.