Lufthansa intends to keep its Boeing 747-8s in service while grounding all its Airbus A380s amid a stepped-up fleet-reduction effort and a wider industry trend toward smaller long-haul twinjets.

On 21 September, the German carrier disclosed its decision to retire 150 aircraft by the middle of the decade – 50 more than previously announced. Eight parked A380s have been “removed from planning” and will only be reactivated in the event of an “unexpectedly rapid market recovery”. 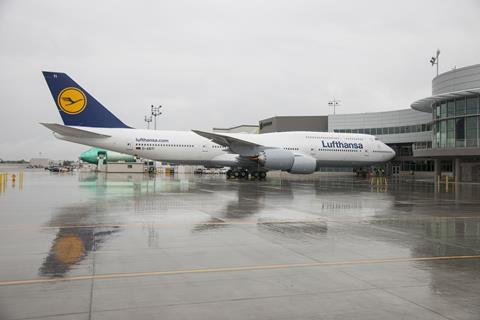 Lufthansa operates a fleet of 19 Boeing 747-8s, 11 of which are currently in storage

Lufthansa had previously put all its 14 A380s fleet in storage in response to the Covid-19 pandemic and accelerated a retirement plan by withdrawing six of them with immediate effect.

Speaking on 25 September during the virtual World Aviation Festival, Lufthansa Group chief executive Carsten Spohr said the airline had also accelerated the phasing-out of 14 ageing 747-400s, moving the timeframe forward to 2025 from the end of the decade. But he says the 747-8s will remain in service to serve as “our flagship… after the crisis”.

He says “we love to operate” the 747-8 and describes the four-engined jet as “the most efficient aircraft” in Lufthansa’s fleet.

Cirium fleets data shows that Lufthansa has 19 747-8s, 11 of which are listed as being in storage.

Lufthansa had previously intended to take delivery of 20 747-8s. But a test aircraft that had been earmarked to join the carrier’s fleet was later withdrawn from the order.

Powered by GE Aviation GEnx-2B engines, the 747-8 joined Lufthansa’s fleet in 2012, making the airline the passenger variant’s launch operator. Its latest 747-8 was delivered in 2015.

Spohr says the aircraft are “more or less brand-new” and cites belly-freight capacity that is “a lot” higher than the A380’s as a reason to keep the 747-8 in service.

Lufthansa introduced its first A380 in 2010 – opting for the Rolls-Royce Trent 900 engine – and received its last in 2015. Again, the airline took one aircraft fewer than it had previously committed to.

The German carrier and Korean Air are the only two carriers operating both the 747-8 and A380.

Korean has 10 747-8 passenger jets and seven freighters. All of the passenger aircraft are listed as being in storage.

Air China – the only other airline operating 747-8 passenger jets – has seven of the aircraft. One is listed as being in storage.

Out of the total 140-strong 747-8 fleet, there are 92 freighters, all but two of which are listed as being in service.

Prior to the pandemic, Spohr said that the A380 – configured by Lufthansa for 509 passengers – was more of a challenge to operate profitably than the 364-seat 747-8 outside peak season.