Singapore Airlines Group has confirmed that its outstanding Airbus aircraft on order have been deferred and that it is close to concluding similar talks with Boeing.

In today disclosing record half year losses amid the coronavirus crisis, SIA Group states that it has “concluded negotiations with Airbus on a revised aircraft delivery schedule incorporating deferrals for part of the aircraft on order”. 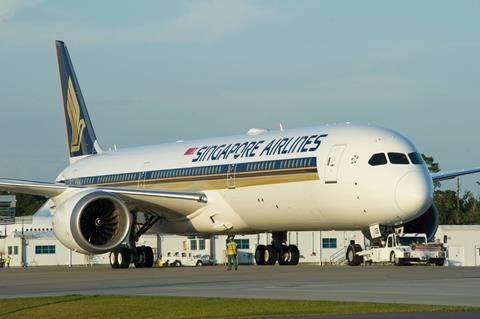 It did not provide further details on the number of aircraft to be deferred. Cirium fleets data indicates that mainline carrier Singapore Airlines has 15 A350-900s on order, while low-cost unit Scoot has 29 outstanding orders for A320neos and a further 16 for A321neos.

As for its orders with Boeing, SIA says discussions are “at an advanced stage”.

The Star Alliance carrier has a larger order book with the US airframer, with 29 787-10s and 20 777-9s on order. Scoot has five 787s on order, while regional unit SilkAir has outstanding orders for 31 737 Max 8s, which are currently grounded globally.

“These outcomes will help to moderate the aircraft delivery stream in the near term,” SIA Group states.

In July, the group had said it had reached an agreement with Airbus on “some of these matters” without elaborating, while saying similar negotiations with Boeing were ongoing.

News of the confirmed deferrals come as the group says it is disposing of 26 aircraft which it “deemed surplus”, following a group-wide fleet and network review. The 26 aircraft include seven older A380s, and 11 A320 family aircraft.

Of the 222 aircraft currently in the group’s fleet, less than a fifth — or 39 aircraft — are operating passenger flights. Another 33 passenger aircraft are deployed on cargo-only operations.

SIA has parked 114 aircraft at its Singapore base, with another 29 more stored in Alice Springs. It is a lower figure than the numbers disclosed in July, when SIA disclosed 148 parked aircraft.

Separately, the carrier adds that the first SilkAir 737-800 to operate in SIA colours will enter into service from next year.

“In the coming months, we will begin to transition the SilkAir narrowbody operations to Singapore Airlines,” the carrier says, adding that the integration will improve the inflight experience for customers, “and bring about greater operational efficiency for the group”.

SIA in July said the merger — involving the transfer of the 737s, which will be retrofitted with new cabin products — was still on track, despite the upheaval caused by the coronavirus pandemic.