Bombardier has delivered its very first 90-seat Q400 turboprop, handing over the first of 25 such aircraft to Indian airline SpiceJet.

The news comes more than two years after Bombardier announced in February 2016 that it was developing a 90-seat version of an aircraft that airlines typically equip with about 78 seats.

Those 12 extra seats reduce the Q400's per-seat cost by 15%, while also slashing the distance between seats to 28in (0.71m) from 30in, according to Bombardier and FlightGlobal's Fleets Analyzer database.

“The additional seats and performance improvements will result in substantial reduction in unit costs, and also we will be able to address our market needs in the regional space,” SpiceJet managing director Ajay Singh says in a Bombardier media release.

A computer-generated rendering of a Q400 in SpiceJet's colours. 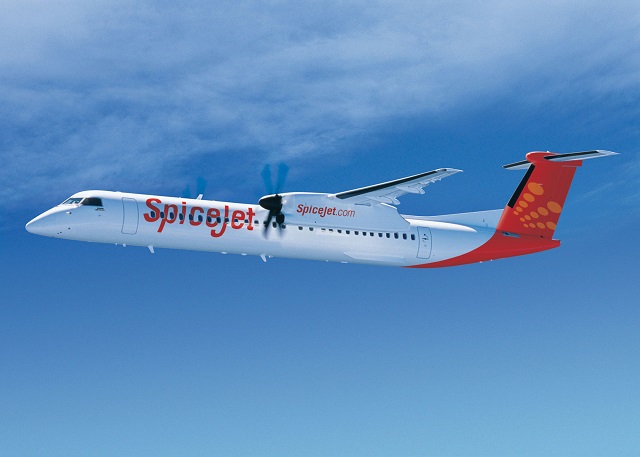 SpiceJet has firm orders for another 24 90-seat Q400s, and also signed letters of intent to take options on another 25 of the aircraft, Fleets Analyzer shows.

CIB Industrial Financial Leasing is the only other 90-seat Q400 customer, with firm orders for five of the aircraft, according to Fleets Analyzer.

Bombardier developed the 90-seat variant in response to what it saw as demand for a turboprop with between 80 and 100 seats – a market in which Bombardier has no competitor, executives have said.

To bump the seat count to 90, Bombardier moved the aft bulkhead further back and reconfigured the front right door, in addition to bringing the seats closer together, it has said.