UK start-up Hans Airways has signed a letter of intent for its first aircraft, an Airbus A330-200, as it bids to launch services this year.

The Birmingham-based airline says it signed the letter of intent covering the A330, MSN950, in the first week of January. Cirium fleets data indicates the aircraft has been operated by Air Europa since its entry into service in 2008. 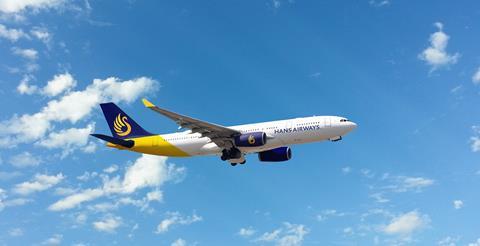 UK carrier signed letter of intent covering its first aircraft, an A330-200, in the first week of January

The airline’s chief executive Satnam Saini says: ”We are delighted to have achieved this very important milestone in our two-year journey. Our scheduled operations centre on the Airbus A330, a popular and spacious long-haul widebody, [which is] excellent for cargo too.”

Hans Airways, which plans to operate flights linking Birmingham with secondary cities in India, applied to the UK regulator for an air operator certificate (AOC) in March 2020.

It hopes to secure its AOC in time for it to begin revenue services this summer. Pilot and cabin crew training started earlier this month.