United Airlines has ordered 100 Boeing 787 Dreamliners, and taken options to purchase 100 more, in what it calls the largest-ever widebody order by a US carrier.

In addition, the Chicago-headquartered airline said on 13 December it has ordered another 100 737 Max aircraft. That comprises the conversion of 44 options, to be delivered between 2024 and 2026, and 56 additional orders for delivery between 2027 and 2028.

The orders are driven by United’s aspiration to be “the world’s leading global airline and the flag carrier of the United States”, says chief executive Scott Kirby. The carrier expects to receive the new Dreamliners between 2024 and 2032. 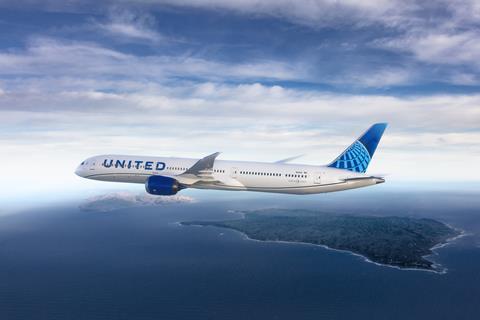 New Dreamliner fleet will arrive between 2024 and 2032

“This order further solidifies our lead and creates new opportunities for our customers, employees and shareholders by accelerating our plan to connect more people to more places around the globe and deliver the best experience in the sky,” he says.

“With this investment in its future fleet, the 737 Max and 787 will help United accelerate its fleet modernisation and global growth strategy,” adds Stan Deal, chief executive of Boeing Commercial Airplanes.

Including other aircraft types, the airline expects to take delivery of about 700 new aircraft by the end of 2032. In 2023 that will average out to two weekly, and in 2024 it will be “more than three” every week, United says.

“We are very sad to see those aircraft go, but it is time to start thinking about retirement,” he says.

As for the 100 options, “Think about those as opportunities… as we are able to expand our international franchise,” Laderman says.

United also still has orders for 45 Airbus A350 widebodies. Executives say that order remains unchanged, but the airline has agreed with Airbus to push back deliveries of those jets for several years. Laderman says the first of those will not arrive “until 2030 at the earliest”.

“The 787 and the A350 are both great airplanes,” Kirby adds. “But we already have a large base of 787s, and in this world where we are trying to bring on 2,500 pilots per year and grow the airline, introducing a new fleet type slows that down dramatically.”

“The right time for the 350 conversation versus the 787 conversation is when we are replacing the bulk of our 777s, which is not until the end of the decade,” he says.

On the narrowbody side, United currently operates 27 Max 8s and 42 Max 9s, Cirium data shows. Including the newly disclosed deal, it now has 443 Max aircraft on order, at least 236 of which are of the larger, as-yet uncertified Max 10 variant.

The 737 Max 7 is also still awaiting certification by the Federal Aviation Administration.

Both those types are subject to a 2020 law, passed after two fatal Max accidents, that will in late December require all newly certificated jets in the USA to have a modern pilot-alerting system. Adding such a system to the Max 7 and Max 10 would be costly and time consuming, and make those types different from Max 8s and Max 9s, which have a legacy alerting system.

Boeing has been seeking an exemption from the requirement. But last week lawmakers excluded that measure from a defence spending bill, leaving more questions about the pair’s path to certification.

Kirby is “reasonably confident” the exemption will come through, saying he sees “a very small probability” it will not.

In that case, he adds, “We would convert aircraft [orders] to Max 9s, we would wind up buying more [Airbus] A321s, we will get compensation from Boeing and so, financially, it wouldn’t be a big deal to United. We have a reasonable plan.”

”But I’m pretty sure it’s going to get done in the next Congress,” he adds.

United expects to have capital expenditures of about $9 billion in 2023 and $11 billion in 2024, most of which will be spent on new aircraft, adds Laderman.

On the personnel front, Kirby says the airline hired 15,000 new employees this year, almost 2,400 of whom were pilots. United aims to hire 2,500 additional flightcrew next year, with the goal of adding 10,000 pilots this decade. In addition, more than 18,000 new flight attendants will join the company in the coming years, and over 7,000 maintenance technicians by 2026.

United and Boeing plan to hold an event at Boeing’s 787 plant in North Charleston, South Carolina, to discuss the order later on Tuesday.