US warns of sanctions on companies that support Iranian airline

In a move described as an escalation of US efforts to combat companies that support terrorist activities, the US government has slapped sanctions on a Malaysian company that provides flight services to Iranian airline Mahan Air.

That company, Mahan Travel and Tourism, has for years provided ticketing and reservations services to Mahan Air, which the US government says carries personnel and supplies for groups like Hezbollah and the Islamic Revolutionary Guard Corps-Qods Force.

"Mahan [Air] is a company operated for the benefit of the Qods Force and their efforts to spread violence," US Department of the Treasury assistant secretary of terrorist financing Marshall Billingslea tells FlightGlobal. "Companies, particularly Western companies operating in NATO nations, need to protect themselves and shut down their business ties" with Mahan Air.

"This action against [Mahan Travel] is a warning shot," Billingslea adds. "There is definitely more to come."

The US government has now blocked "all property and interests in property of Mahan Travel and Tourism… that are or come within US jurisdiction", says Treasury.

A telephone call from FlightGlobal to Mahan Travel went unanswered.

The US government in 2011 designated Mahan Air as a company that supports the Qods Force and terrorist activities. The airline transports personnel and weapons to Syria in support of the Syrian president Bashar Assad's regime, and has carried weapons and personnel for Hezbollah, says the Treasury Department.

Mahan Air operates a fleet 49 aircraft, most of them Airbus A300s, A310s and A340s, according to Flight Fleets Analyzer.

A route map provided by the Treasury Department shows that Mahan Air has served about 40 international destinations in the last year. Those include places in Asia, India and Russia, and also in Turkey and European countries like Germany, France, Spain, Italy, Bulgaria and Serbia.

"All of them are of great concern to us," Billingslea says, adding that routes to Europe – particularly to cities in NATO-member countries – are "highly problematic".

The Treasury Department released a map of Mahan Air routes. 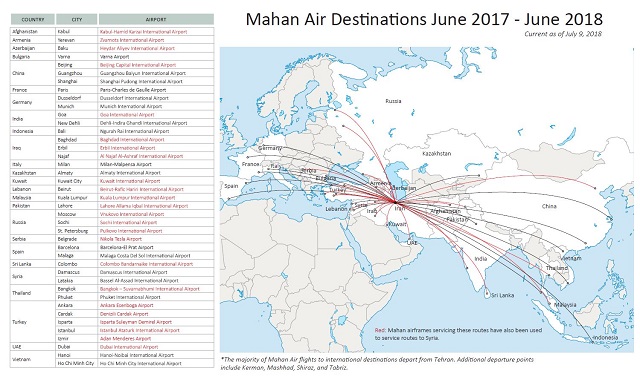 US Department of the Treasury.

The USA is "determined" that Mahan Air's flights into countries allied with the USA be "terminated" – either by economic means or through action by governments or airports, Billingslea says.

"Any company that continues to transact with Mahan [Air] is doing so at great financial risk," he says, adding that the US government knows the airports and various companies – including providers of fuel, maintenance and cargo services – that support Mahan Air.

The new sanctions come one month before the USA is set to finalise a withdrawal from the Joint Comprehensive Plan of Action – the deal signed by the Obama administration with Iran and four other countries. The Trump Administration announced its intention to withdraw from the agreement on 8 May, starting a 90-day wind-down process.