Airbus might not have a stretched A220 on its drawing board yet, but given the frequency with which the so-called ‘-500’ is mentioned at the airframer’s briefings, there is a sense that the aircraft is practically being willed into existence by journalists, investors and perhaps one or two airline customers.

The ‘A220-500’ designation has never been official; its origins lie in an abandoned ‘Bombardier CS500’ trademark filed in 2009, and dropped in 2014, several years before Airbus took over the Canadian company’s CSeries programme. 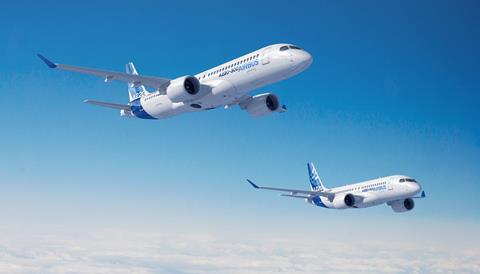 Room for a larger sibling?

But it seems nevertheless to have stuck. Chief executive Guillaume Faury referred to the A220-500 during a recent capital markets event, indicating that its addition would turn the A220 into a “powerful” family – arguably the strongest endorsement of the hypothetical aircraft to date.

That the A220 has emerged victorious in its clash with the A319neo is beyond doubt. As the CSeries it had secured twice as many orders as the Airbus jet even before the acquisition – despite the European airframer’s attempt to dismiss the CSeries as being a serious contender. With Airbus’s backing, the now-A220 has recorded more than 770 orders, eclipsing its rival.

The A319neo was born disadvantaged, not only by its development as a shrink but also by the trend for Airbus single-aisle customers to shift the interest fulcrum beyond the A320neo and towards the higher-capacity A321neo.

But even though the A321neo is outselling its smaller sister, the A320neo backlog is hardly a concern, except in the sense that Airbus cannot build the jets fast enough, and it is likely to adopt the “ain’t broke, don’t fix it” approach towards replacing its ubiquitous twinjet.

That effectively leaves the A220-500, likely to slot into the 140- to 170-seat segment, as a solution looking for a problem, unless Airbus finds sufficient rationale to juggle the overlap between two similar-sized aircraft.

Airbus’s development of the A321neo into a sub-family including the LR and XLR could signal a gradual separation of its single-aisle line-up. If the A320neo’s slide into second place starts turning into a relegation, the A220-500 seems the obvious consolidation route for the lower end of its range – particularly given Faury’s assertion that the A220 “needs” the stretched aircraft to underpin its family potential.

But A320neo deliveries remain strong as Airbus seeks to ramp up single-aisle output to record rates, and the airframer – still focused on the A321XLR certification task – has other A220 priorities to address before embarking on the complexity of developing a new variant.

While it emerged relatively unscathed from the pandemic-driven production-rate upheaval, the A220 programme remains loss-making and Airbus is striving to bring down costs, take monthly production to 14 aircraft, and achieve break-even by the middle of the decade.

Which means the A220-500 will probably be an aircraft in name only for the time being, and Airbus will have to keep repeating its “when, not if” mantra to persistent audiences until possibility turns into necessity.