The de Havilland Comet, the world’s first passenger jet, made its commercial debut 70 years ago. We look at how Flight reported the event and subsequent developments, and regarded the significance of the programme for UK and global aviation.

On 2 May 1952, the de Havilland Comet made its fare-paying passenger debut, with a British Overseas Airways Corporation (BOAC) multi-stop flight from London to Johannesburg. The world’s first commercial jet went on to have a calamitous safety record – with three accidents in the first 12 months of service and a subsequent grounding for the type. 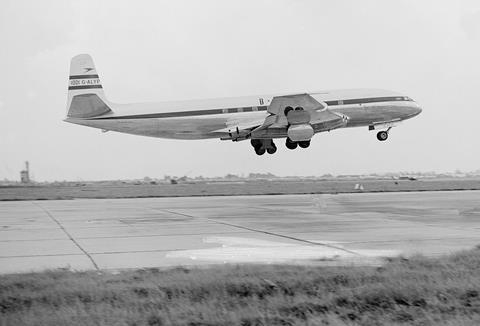 The first passenger flight of the Comet, departing London on 2 May 1952

However, the Comet ushered in the jet age and gave the UK a headstart on its post-war aerospace rivals, the USA, the Soviet Union and France, whose Boeing 707, Tupolev Tu-104 and Sud Aviation Caravelle followed into commercial service later in the decade.

Flight – as it then was – had chronicled the development of the Hatfield-designed Comet since before its first test flight in 1949, and its reporter recorded colourfully the scenes at 14:45h at London Airport (now Heathrow) ahead of the commercial debut. “Airliners of many nations crowd the apron, their cabin-tops white against an inky sky. Among them, out of sight of the many observers at windows and on terraces, is BOAC’s de Havilland Comet G-ALYP. Today, it carries for the first-time fare-paying passengers,” we wrote.

“With the full complement of 36 installed, and his initial cockpit checks completed, Capt A. M. Majendie, flight captain of the Comet fleet, is ready to start the four [de Havilland] Ghost turbojets. Now the shrill jet-song drowns the background hum of piston-engines and heat-haze floats away. Promptly, at 1500hr, chocks are pulled away.

“Twelve minutes later, climbing swiftly away from No 5 runway in a wake of thunderous sound (inaudible near the terminal buildings), the flagship is airborne for Rome. So began the first scheduled jet flight to Johannesburg, where the Comet arrived 23hr 38min later – two minutes ahead of schedule.” 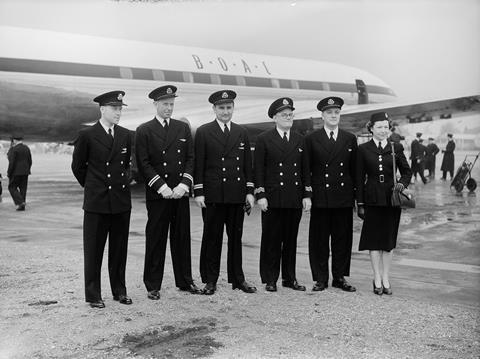 The BOAC crew of the first commercial passenger jet service

The flight went “without a hitch”, according to BOAC chairman Sir Miles Thomas, and had “put British civil aviation – jet-propelled – on the map of the world”. Capt Majendie added: “We are very glad to have the honour of launching this service. We are also very proud to be using this British aeroplane.”

A month later, after some “tiresome characters” had spent “five years” saying “there was no such thing as a Comet”, our US correspondent reported seeing “adequate and appreciative” American newspaper coverage of the “first operational flights of our turbine transport”. The editor of Flight had an “excellent short piece” in then-US aerospace bible Aviation Week and many publications had editorials, “nearly all of the Milestones in Aviation variety”, we noted.

For a nation battered by the Second World War, with basic foodstuffs rationed and deep in debt, the Comet programme represented a chance for many Britons to feel proud and optimistic about the country’s industrial prospects. We wrote: “For those turbine-transport and Comet supporters here in the USA – both British and American – who have lived through five years of potential hardship it was comforting to read such newspaper comments as: ‘This flight by the de Havilland Comet is jolting US airlines into the realisation that sooner or later they will have to acquire jet transports’.”

We continued: “The roots of the trouble were complacency, a lack of adequate long-term planning, and too slow an appreciation of what the British turbine programme really meant. There was disbelief that Britain could pull such rapid construction and development out of its war-torn bag, and a strong feeling that, once jet transports were really needed, the American industry could and would supply them almost overnight.

“Two or three [US] West Coast firms have started to build a prototype. Lockheed and Douglas are probably as far ahead as anyone, the former thinking of a big non-stop Atlantic aircraft, while Douglas are said to be looking more towards the domestic market.”

Competitors in other countries, “particularly those airlines which have not yet finally resolved to enter the jet-transport field, or those manufacturers whose designs are out-dated by the Comet, have subsequently implied that Britain’s jet airliner is an uneconomical vehicle operated solely for reasons of national prestige. BOAC can refute allegations that Comet services are run on a basis of subsidised experiment,” we went on. 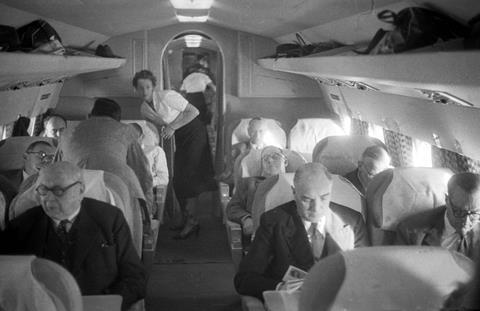 “The [eight-aircraft] fleet are flying eight long-distance return services a week, which means that Comets cover an average of 17,000 miles daily.”

“BOAC’s forward planning of jet services is, of course, dependent on the delivery and performance of later versions,” we continued. “As early as possible in 1954, the corporation intend to open the first transatlantic jet services – between the UK and South America. This will be an essential preliminary to inauguration – in 1956/57 – of North Atlantic services with larger, longer-range Comet 3s.”

Acknowledging perhaps the risk of disasters to come, we noted that “cabin-pressure differential as high as 8.25lb/in2 was another step into the unknown, and since 1947 de Havilland have been quite aware of the consequences of structure- or window-failure at such a pressure.

“De Havilland has had enough experience to be confident that [Redux bonding] could be used, but they were exceedingly bold in adopting it not only to attach minor stringers and stiffeners but also to make primary airframe joints, such as those between spar booms and webs, and between large fuselage stringers and window frames and the skin.

“Much has been made in the US of the dire consequences of windows blowing out at 40,000ft. De Havilland have approached the undisputed problem by treating windows as though they were part of the basic airframe and stressing them accordingly,” we wrote.

The 6,500lb-thrust (28.9kN) Rolls-Royce Avon-powered Comet 2 made its first flight on 27 August 1953, with Sir Miles Thomas signalling to Sir Geoffrey de Havilland: “May this be the forerunner of many millions of miles of further co-operation”.

However, clouds had already begun forming over the programme. On 2 May 1953 – the first anniversary of the Comet’s entry into service – G-ALYV “disintegrated in the air” shortly after taking off from Calcutta and while flying through a heavy storm.

Flight was not long after – on 10 January 1954 – reporting “with deep regret” the loss of G-ALYP with all occupants over the Mediterranean, after taking off from Rome. The aircraft had carried the world’s first jet passengers less than two years before.

Barely 90 days later another Comet, G-ALYY, came down in the same area of the Mediterranean. (Two previous Comet accidents had involved excessive nose-high take-offs and bore no relation to this loss.)

Flight stated that “in the circumstances” it was not surprising that within 36hr BOAC announced that it was only “as a prudence” that Comet services were suspended, permitting a “minute and unhurried” examination of every aircraft. Commercial flights with the Comet would not resume until 1958.

By the end of January 1954, Flight reported that the search for the main wreckage from G-ALYP, lost off Elba “in unexplained circumstances”, was proceeding intensively. The fuselage was eventually found at a depth of more than 500ft and raised to the surface.

In the UK, day-and-night examination of the fleet continued. This included dismantling G-ALYU and using recovered wreckage from G-ALYY, while other airframes were subject to specific system checks.

Alan Lennox-Boyd, the minister of transport and civil aviation, stressed the need for patience before forming judgment on the accident. He was keen to make the point that, while it could not be ruled out, possible sabotage was only one cause.

Given the wide public concern over the Elba Comet accident, the (then) Royal Aerospace Establishment provided a briefing at Farnborough to explain and demonstrate component-testing and vibration wing-testing fatigue tests. These included work in the accident-investigation hangar of the wreckage returned from near Calcutta.

Farnborough began a reconstruction that took many months – aircraft parts were laid out in a hangar as far as possible in correct position relative to their correspondence in an unbroken aircraft. The investigation followed well-defined lines, with account taken of height and wind, and the speed at which parts fall.

A failure sequence became evident that enabled deductions to be drawn from dents and scratches in the wreckage, along with blistered paint, burned surfaces, and smoke marks from fire.

Lightning strike and explosion were ruled out and fire was shown as secondary, having broken out following structural failure. It was established that one tailplane had failed followed by the other, followed by first one wing and the other. The investigation eventually concluded that the crash of G-ALYP had been caused by a failure of the pressure cabin as the result of metal fatigue. 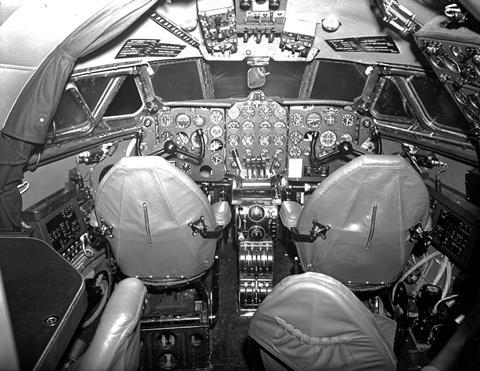 The Series 2 Comet meanwhile went to Africa for tropical trials in January 1954. The first production Comet 2 – G-AMXA – made what the manufacturer announced as a “fast flight, an incidental part of routine trials in order that performance tests may be concluded without delay”.

Flight added: “It is expected that the African trials will be completed in about a week’s time. In January, Khartoum daytime temperatures are around 100° F, and from Jan Smuts Airport, Johannesburg, which is 5,000ft amsl. These tropical tests form the last phase in the CoA trials of G-AMXA; as the first of BOAC’s 12 Series 2s, the first aircraft is due for delivery this spring.

“The Comet covered the 3,080.6 statute miles (great-circle distance, airport to airport) in 6hr 22min 7.2sec. The flight, observed by the Royal Aero Club, represents a centre-to-centre average speed and will thus represent a capital-to-capital record once the figures are confirmed.”

Another version of the Comet was to follow. “Flight trials of the Series 3 began promisingly with three separate trips totalling 2hr 35min. In terms of performance and capacity, the new Comet marks an appreciable advance on its predecessors, being designed to carry 58-76 passengers on stages of up to 2,600 miles,” we reported six months later.

The new variant’s “most noticeable [distinguishing feature] is the long, shapely fuselage, measuring 111ft 6in from nose-to-tail, and 15ft longer than that of the Comet 2. Wing spread remains unchanged at 115ft; the tailplane is altogether larger. Cabin windows are now circular instead of square,” according to Flight.

The engines were 10,000lb-thrust Avon 521s, compared with the Comet 2’s 7,000lb-thrust Avon 503s. While the additional range came from an extra 1,150 Imperial gallons lodged in pinion tanks on the leading edge of the wing, which also sported the drooped profile adopted for late-production Comet 2s. Flap area had been “greatly increased” and there was now a large split flap beneath the fuselage, we noted.

Comet’s debut London-Johannesburg service (via five stops, the first in Europe), did not introduce true intercontinental travel. That came from the USA, which had caught up by the time the Comet resumed service. BOAC flew London-Gander (Canada)-New York on 4 October 1958, while PAWA introduced Boeing 707s from New York less than a month later.

BOAC offered travel to Colombo (Sri Lanka) via Rome, Beirut (or Cairo), Bahrain, Karachi, Mumbai (Bombay), and further east via Karachi, Kolkata (Calcutta), Yangon (Rangoon), Bangkok (with side track to Singapore), Manila, Okinawa, and Tokyo. Also, in France, UAT provided Paris trips to Dakar (via Casablanca) and to Brazzaville (via Tripoli and Kano). 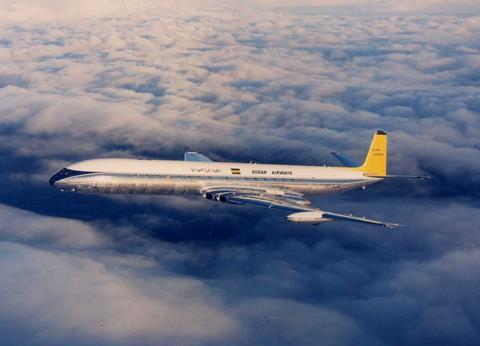 Production ended in 1962, four years after the Comet 4’s introduction

De Havilland stopped production in 1962 after the Comet 4, which debuted in 1958 and remained in commercial service until 1981. The two final production aircraft became prototypes of the HS.801 re-engined maritime-reconnaissance Nimrod.

However, the Comet’s flight and service debuts in 1949 and 1952, respectively, will always mark the UK as the country in which jet travel originated.