The “need for speed” continues to fascinate and inspire mankind, with leading militaries now fielding or striving to acquire hypersonic (Mach 5-plus) missiles, and multiple supersonic airliner and business jet designs being touted by their eager developers.

This rush of activity comes as the aerospace industry prepares to mark the 75th anniversary of the first manned flight to travel faster than sound. But while the ambitions and achievements of today’s would-be pioneers can grab instant headlines and online attention, the post-Second World War scramble to break the sound barrier involved closely-guarded secrecy. 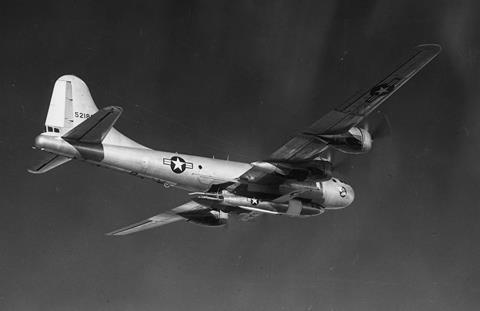 Looking back to Flight’s issues of the time, the almost complete lack of information divulged by the USA about its activities and successes highlights the tensions of the time, as the Cold War rivalry began between the nation and the Soviet Union.

Indeed, the date 14 October 1947 only became etched in aviation history several months after the historic event had happened, so reluctant was the newly-created US Air Force (USAF) to go public about its breakthrough. Performed over California using an experimental rocket-powered Bell X-1 – at that time referred to as the XS-1 – released from an adapted Boeing B-29 bomber, the flight achieved M1.06 at an altitude of 43,000ft.

In its online fact sheet about the X-1 programme, NASA notes that “the flight and all data” were declared Top Secret within 2h of the event. “Not until December 1947 would word leak of the achievement, and it was not until March 1948 that the US Air Force officially confirmed the achievement,” it notes.

Writing in the ‘American Newsletter’ section of Flight’s January 29th, 1948 edition, our correspondent “Kibitzer” wrote about the uncertain situation, within a review of the previous year’s advances.

“Then came the rumours of success of the Bell XS-1 in its attempt to reach the speed of sound. These were only rumours to start with, but when linked with other apparently unconnected happenings it became obvious that something remarkable had occurred.

“Yet the secrecy ban… still remains. In the end the technical press could bear it no longer, and one aviation paper came out with a definite but unconfirmed statement that the Bell XS-1, piloted by Army and NACA pilots, had, by working gradually up through a series of flights with Mach numbers of .90, .92 and .96, at last gone through the sonic barrier to a Mach number of 1 .1.

“The air force would neither confirm nor deny this report, but they were obviously upset by it, inasmuch as they are said to have handed the whole matter over to the Department of Justice to see if any security measures had been violated.”

Despite the uncertainty, the magnitude of the achievement was not lost on our writer, who noted: “Until the air force decide to release details of what has actually happened, it is foolish to make guesses… but if the reports are true it would seem that the sonic ‘barrier’ wasn’t such an insurmountable one after all. This alone is a fact of the greatest importance.”

Then, just two weeks later, our correspondent postulated about the emergence of the US Navy’s Douglas D-558 II.

“Following a logical line of thought it may be that the Bell XS-1 has forced the navy’s hand. Yet, if it is the XS-1 it can hardly be a contestant for the world’s speed record, for it cannot take-off under its own power on full load, nor has it the endurance.

“Again the logical deduction is that the army have gone for, or are shortly going to attempt, an attack on a Mach number of one – or better. This is borne out by a public statement from one of the heads of research here who forecast sonic speeds within a (or was it ‘the’) year.

“Personally, I doubt if the XS-1 can actually reach such a high Mach number, even at its designed operating height of over 70,000ft. But even if it does better than 0.9 at that altitude it will be a fine effort, and whoever flies it deserves all the credit he can get.

“The only strange thing about all this conjecture is that never before have the army been backward about proclaiming their achievements. Maybe the figures are hard to check, or the attempt is still to come.”

Subsequently, we made reference to the achievement as a front cover ‘Outlook’ item in our June 17th, 1948 issue: some eight months after the event.

“Last Thursday, after relating how the Colour had not been Trooped, and telling the awful tale of England’s first innings, the BBC at news time added as a tail piece that an American aircraft had flown faster than sound.

“Some excuse may be admitted for thus dismissing one of the most important events in the sensational history of mechanical flight, for as long ago as last December a report appeared in the American Journal, Aviation Week, and was quoted throughout the world, to the effect that the Bell XS-1 rocket-propelled research aircraft had achieved supersonic speed, not once, but several times. 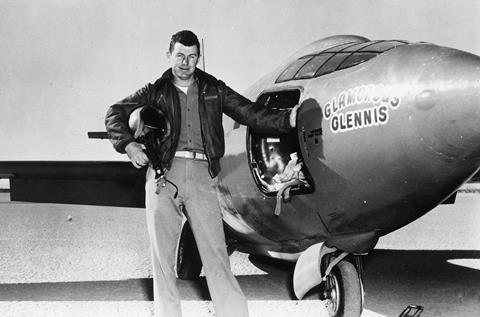 “Now that no less a person than Mr. Symington, American Secretary for Air, has given confirmation of this performance, we must hasten to tender our congratulations jointly to Captain Charles E. Yeager, the pilot named, to the Bell Aircraft Corporation who designed and built the XS-1 (in conjunction with the USAF and the NACA) and to Reaction Motors Inc., for the rocket unit.

“Whether supersonic speed was first achieved in conformity with a long-term programme, whether it occurred by accident or whether the pilot was suddenly overcome by a desire to ‘give her the gun’, is not yet known, but, whatever the circumstances, the achievement ranks as one of man’s most remarkable technical accomplishments.”

Further details were not forthcoming, meaning that Flight’s next notable mention came in our 28 September 1950 edition, as a News in Brief item (see a pdf of the page at the foot of this article).

“Nearly three years after making the world’s first supersonic flight, the rocket-powered Bell X-1 research aircraft was flown, beneath a B-29, towards a final resting place in the American National Air Museum in Washington.” This was accompanied by an image showing Yeager and the museum’s director alongside the rear of the aircraft.

With the supersonic age now opened, others swiftly followed: 6 September 1948 saw the first such flight made by a British aircraft, the de Havilland D.H.108 Swallow.

An editorial piece in our following issue described the flight – conducted by famed test pilot John Derry – as “One of the most efficacious tonics administered to British aviation in recent years”.

“Derry had no firm intention of attempting to exceed Mach 1, the declared purpose of his flight being the collection of data at speeds above Mach 0.96, which he already attained. He put the 108 into a dive at 40,000ft, steepening the angle of descent as the hand of the Machmeter approached the magical figure ‘1’ and holding the dive until the needle passed the limit of its indication,” we wrote. 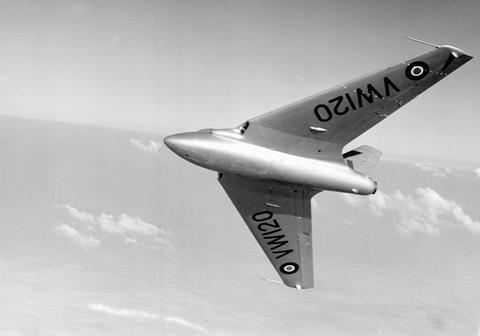 “He had experienced no unusual sensations, but as the speed built up the controls became very heavy, despite the power-boost system now installed. As the 108 decelerated to Mach 0.96 control characteristics returned to normal.”

The rapid pace of airframe design and propulsion technology advances have since seen several generations of combat aircraft produced with supersonic performance, including Lockheed Martin’s F-35B – the first short take-off and vertical landing type to be capable of the feat.

However, militaries today are exploring the potential of hypersonic technologies, for use in the guided weapons sector.

China in 2021 conducted a test launch of a hypersonic missile, prompting concerns from the US Department of Defense that Beijing could field an operational system capable of conducting rapid global strikes, or even of targeting the GPS-constellation satellites vital to enabling precision strikes by many of its own munition systems.

Russia, meanwhile, in March 2022 used the Ukraine conflict for the first in-anger launch of a hypersonic missile – the Kh-47M2 ‘Kinzhal’ – from an RAC MiG-31 interceptor. The weapon was deployed against an underground weapons storage facility, Moscow says.

Those demonstrations using M5-plus systems exposed how Beijing and Moscow have stolen a lead over the USA in this weapons class. The USAF currently is funding development work on multiple candidate hypersonic weapons, but has enjoyed only limited success during testing. 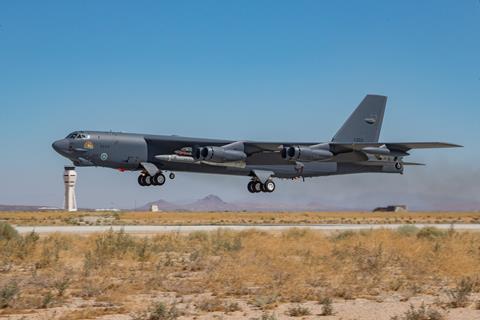 Lockheed’s hypersonic ARRW has undergone flights on a B-52

Lockheed’s AGM-183 Air-launched Rapid Response Weapon (ARRW) has completed two successful launches from a Boeing B-52 this year after suffering earlier setbacks, but the service is shifting funds to what it believes to be a more promising design, the same company’s scramjet-powered Hypersonic Air-breathing Weapon Concept.

The USAF is not alone in trying to catch up with Beijing and Moscow. At the Farnborough air show in July 2022, the UK Royal Air Force’s (RAF’s) Rapid Capabilities Office announced a pact with Reaction Engines to pursue a Hypersonic Air Vehicle Experimental activity. Drawing on the company’s innovative precooler technology, the work will explore the feasibility of designing and operating a reusable platform, although the RAF declines to detail what it considers to be potential operational applications for such a system.

While it would appear to be feasible that a supersonic airliner or business jet could find a niche role with military customers, the idea of manned hypersonic aircraft being introduced is likely to remain the stuff of Hollywood.

In the Top Gun sequel Maverick, released earlier this year following a pandemic-driven delay, Captain Pete Mitchell is engaged during secretive US Navy flight testing of a M10-capable aircraft named Darkstar – a design created for the big screen by no less than Lockheed’s Skunk Works unit. 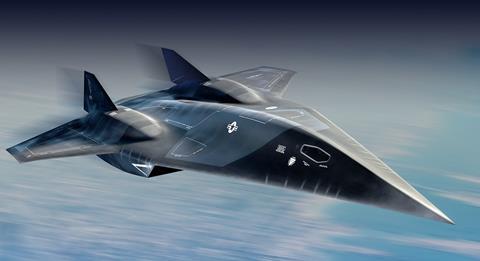 The Skunk Works-designed Darkstar appears in the Top Gun sequel Maverick, as a Mach 10-capable platform

But while the film does not indicate what sort of mission the platform could be tasked with performing, its reference to such development efforts being threatened as spending is increasingly channelled towards unmanned or space-based platforms is sure to be more fact than fiction.