It was the “fluidity and freedom” of helicopter flight that grabbed her, says Captain Christina Brun; the fact that “you can pick them up or put them down wherever you want” without the need to rely on a runway.

“I was never really interested that much in fixed-wing flying – it was always helicopters that fascinated me. I did a trial lesson and I was hooked,” she says. 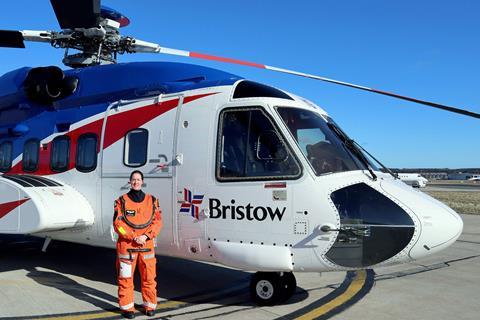 Brun is chief pilot for Bristow Helicopters at its Aberdeen and Sumburgh bases in Scotland, dividing her time between flying oil and gas crew-change missions and all the tasks required to manage the 85 pilots in her charge.

Hailing from leafy Buckinghamshire in England’s Home Counties, a location far removed from Aberdeen, the UK’s oil and gas capital, Brun had no familial links with aviation. But with a keen interest in golf as a child, her attendance at one tournament provided the inspiration for her later career choice.

“It was really sparked when one of the players arrived in a helicopter – for me that was just a ‘wow’ moment.”

But even then, becoming a helicopter pilot was not her first choice. Instead she felt it was “more sensible to go into business” and ended up with a job in the IT sector. But once lodged, that “spark never leaves you”, she says, spurring a decision to switch careers and pursue her dream.

Brun qualified for her private pilot’s licence in parallel with working in her IT role, then moved to the written element of a commercial licence. Eventually she reached a point of no return: the flying portion of the ATPL required her to quit in order to dedicate herself to the effort.

A year later, she had a job as a first officer at Bristow. There was always an aim to work in the North Sea area, says Brun, and early on had made contact with Bristow’s head of training. “There was no doubt in his mind what my goal was,” she says.

Although Brun says that obtaining an interview and the subsequent job offer were partly thanks to a combination of “persistence and timing”, as the cliche goes: you make your own luck.

With its regular departures, operations in support of the oil and gas industry are the closest thing the rotorcraft sector has to a scheduled airline operation, albeit everyone is wearing a survival suit and although passengers are on business, there is no business-class.

For Brun, the appeal was “the structure, the training and the progression” promised by Bristow: “From the point at which you start until you get your command it is so structured and defined; it says where you have to be and the standards and exams you need to attain,” she says. “That’s what you want as a pilot.”

She did consider search and rescue (SAR) work at the beginning of her career, but even though oil and gas work requires early starts, “I know myself, and it wouldn’t suit me to be woken up and called out”.

Of course, the crew change routine does not suit everybody – “some people would hate the regularity you get with the oil and gas operation”, Brun says – not least her husband, who is a SAR pilot at Bristow’s Stornoway base.

Part of the structure alluded to is the career progression pathway within Bristow: there are clear milestones and assessments in place to guide a pilot from first officer, to senior first officer and ultimately to commander.

But what that process does not necessarily provide for – although it might prepare a candidate – is the shift to a more managerial post.

Brun had been a commander for a couple of years when she approached management asking to be considered if a vacancy for a deputy chief pilot opened up. Within six months a suitable role in Aberdeen appeared, to which she was appointed. Then, in 2014, Brun was promoted to chief pilot, covering both the mainland site and a second base in Sumburgh, Shetland.

Ultimately, a chief pilot’s role is the “safe execution of the flying programme”. Brun is in charge of the 85 flightcrew across the two bases and is responsible for “everything that is involved in managing that group of pilots”. But she also performs another vital function – acting as a conduit between management and those in the cockpit. In this respect she sees strong similarities with her previous career where she was “bridging between the client and the company”.

“It’s the same with a chief pilot: you are bridging a gap between the pilots and the higher levels of the company.” There is also a requirement to liaise with customers, particularly if there has been an incident offshore, whether safety- or staff-related.

Those skills were put to the test in 2016 when an Airbus Helicopters H225 flown by another operator in Norway crashed with the loss of all 13 on board after its main rotor separated in flight.

The H225, alongside the Sikorsky S-92, was a mainstay of the offshore sector. Its subsequent grounding for oil and gas operations reduced capacity at a stroke.

While this posed obvious logistical problems – how to maintain a service to clients and the need for pilots to qualify on other types – those were easily dealt with. The larger challenge was one of reassurance and outreach. “Your primary function is to make sure your crews are okay,” she says. And while crews are “fact-based” and would understand that a different aircraft type is unlikely to have the same issue, passengers who are “just travelling to work” are less likely to have the same depth of knowledge.

Bristow had to address the “hearts and minds” of passengers so they “wanted to get on board a helicopter again”, she says.

While Brun participates in numerous initiatives, such as working with local schools, to encourage more women into aviation, sparking interest in a career as a helicopter pilot remains a challenge. During a recent recruitment round, just 2% of applications were from women, although Brun is hopeful that Bristow’s newly announced sponsored cadet programme will see greater female participation.

The Covid-19 crisis of the past 18 months has forced everybody to adopt new working patterns, with those in office jobs having to carry out their role from home.

Although 50% of Brun’s time is in the cockpit, the other half usually involves face-to-face contact – something which is much harder to replicate from a distance.

Of course, “as pilots, we can’t really fly remotely”, she says, which, in the depths of lockdown, was a rare bright spot. Flightcrews were “incredibly lucky because we got to come in and fly”, she says. “That was an absolute godsend – interacting with other human beings.”