Picking through the pieces to find answers after an aviation tragedy inspires Zoe Keliher, who uses her extensive experience in the role and as a skilled pilot to help improve aviation safety in the USA.

National Transportation Safety Board (NTSB) aviation accident investigator Zoe Keliher traces her aviation career to the day her father gifted her a flight lesson for her 15th birthday.

Keliher’s father was not a pilot; nor was anyone in her immediate family. But as a girl, Keliher, from Ketchum, Idaho, dreamed of flying. Her father made it happen.

“My dad calls it the most-expensive present for a 15-year-old,” says Keliher, now 42 and working in Portland, Oregon as an NSTB senior aircraft accident investigator. “Every barrier I had, he was like, ‘Let’s take down that barrier’.” 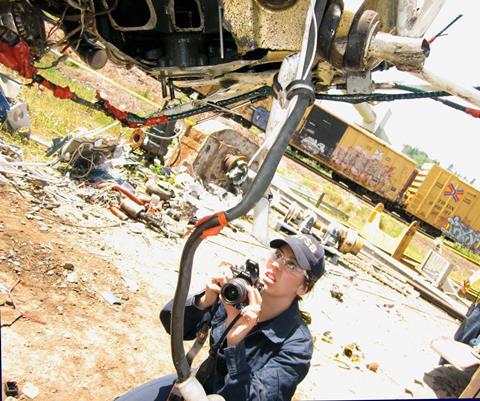 NTSB investigator Zoe Keliher documents the wreckage of a Vans RV-10 that crashed in Toledo, Oregon on 31 May 2014

Keliher has done just that.

The old stereotype holds that men are more suited for such work – that women are less “authoritative”, less knowledgeable about machines and mechanics, Keliher says.

Through hard work and an impressive degree of humility, Keliher has shattered such conceptions.

“The hardest thing with being a woman in this job [is] the presumed gender roles,” says Keliher, adding that being young and female is a double whammy.

Keliher has sensed surprise when arriving to lead investigations. Others initially think she must be an assistant, not lead investigator; some people look past her, seeking answers from men in the room, she says. Some men feel obliged to explain things Keliher already understands.

She strives to take the preconceptions in stride; to keep her ego in check and to avoid striking back.

“You don’t take it personally. This person is telling me something about them,” she says. “It’s hard not to, especially when I’m out in the field… in hangars with pictures of naked women on the walls.”

Keliher thinks one reason women are less represented in fields like aviation is because they receive less opportunity and less encouragement to explore such work.

Those opportunities came to her partly thanks to her father. In addition to that first flight lesson, she grew up working at his hardware store, learning about tools and equipment, fostering mechanical know-how.

Keliher completed her first solo flight at the age of 16 and graduated high school early, shipping off to Embry-Riddle Aeronautical University’s campus in Prescott, Arizona.

One day, a Northwest Airlines pilot presented to students, regaling them with tales of being an airline pilot. Shortly after, Keliher saw that same pilot at the airport. This time he was frank. “Don’t be a pilot,” he told her, citing time away from home and a difficult family life.

After graduating with a bachelor’s degree in aeronautical science, Keliher took a job with the “highest bidder” – aviation parts company Aviall, later acquired by Boeing. Quickly realising that all-day computer work was not for her, she left Aviall and returned to Embry-Riddle, earning a master’s degree.

She joined the NTSB in 2003 and credits her career advancement partly to valuable support from mentors, including former NTSB investigator Jeff Rich, who ran the agency’s Los Angeles office.

But she worked hard. Keliher holds a commercial multi-instrument pilot licence, seaplane and helicopter licences and an aviation maintenance licence. She recently earned a law degree from Lewis & Clark Law School in Portland – studies she says help her understand the NTSB’s role and how litigation can spur safety improvements.

The work is anything but low-stress.

NTSB investigators are generally “on call” for one-week periods, followed by several weeks off. While on duty, Keliher’s phone might ring any time with news of an accident. No matter if dining with family or at a show with friends, Keliher must be ready to go. She needs to be able to fly out to an accident scene within 2h, she says, adding: “I am a genius at packing.”

Is it all too stressful?

Not for Keliher. “It’s fantastic,” she says.

There is frequent exposure to death. Keliher says examining deceased people at accident scenes helps her determine causes. Was the pilot using a cell phone? Was he or she wearing contact lenses? What is the time on the pilot’s watch?

“Constantly seeing death… you have to compartmentalise,” Keliher says of the emotions. There are moments when she thinks: “I would have done the exact same thing as that person, and that person is now dead.”

She is among six female NTSB investigators, out of a team of roughly 40.

Keliher completes much of the investigatory work herself. She scours neighbourhoods near crash sites, knocking on doors in search of witnesses. She seeks out security cameras, which are so ubiquitous that nearly every accident is now caught on video.

Keliher seeks input from experts at aerospace manufacturers, who essentially have no choice but to answer her questions. She tears down engines, checks aircraft systems, reviews cockpit settings, maps ground impact marks and collects weather data. She works with lawyers, police and insurance representatives.

Investigations culminate with written accident reports – documents that detail all relevant factual data and include probable causes. “We spend a disproportionate amount of time writing,” she says.

Keliher cannot see herself in another line of work. And she thinks qualities society typically associates more closely with women are advantages. Healthy degrees of empathy and emotion, for instance, are valuable when interacting with grieving families, she says.

Keliher also views women as particularly open to challenging pre-held beliefs and initial conclusions, and as less inclined to over-confidence.

“The work of an accident investigator involves developing a hypothesis and then seeking to prove that hypothesis wrong,” Keliher says. From the moment she arrives at an accident, “I am instantly trying to prove myself wrong”.