How regional freighters offer a load to recovery

Airbus and Boeing are betting on the continuing ascent of air cargo after going head to head in large twinjet freighters with their respective A350F and 777-8F launches. Meanwhile, prompted by a reviving global economy and lively e-commerce sector, orders for passenger-to-freighter (P2F) widebody and narrowbody conversions continue to soar, with several MRO specialists launching programmes over the past 18 months.

However, air freight also has to be delivered on shorter, thinner routes where using a large jet would be uneconomical – and into remote airfields where it would be impossible. That is where regional freighters come in. Leaders of ATR, De Havilland Canada and Embraer have all spoken recently about their high hopes for the e-commerce market and how it is feeding through to demand for P2F conversions. Only ATR, however, has committed to a new-build freighter. 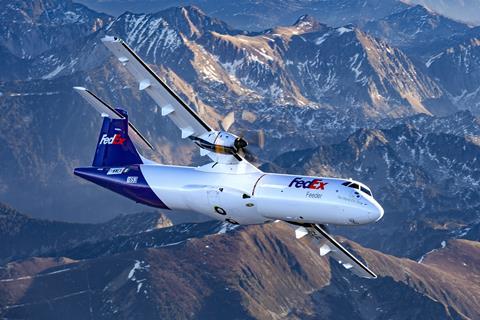 The Toulouse-based airframer has secured one customer so far for its ATR 72-600F, the first of which was delivered in December 2020 to FedEx. The logistics specialist took five more examples in 2021, out of a total order for 30, plus 20 options, placed at launch in 2017. The aircraft can carry 9t of freight, but its most important feature is its volume, with a capacity for seven LD3 containers or up to nine pallets, says senior vice-president of commercial Fabrice Vautier.

The 72-600F, which has been flying for FedEx in Europe and North America, is fitted with a large cargo door in the forward fuselage, as well as a cargo door in the rear. All its windows have been removed, and a new lighting system and reinforced flooring have been installed. The 2.94m (116in) x 1.8m, upper-hinged forward cargo door allows FedEx, and future operators, to interline with their larger aircraft, says Vautier, who adds that ATR is “working on” securing further customers. 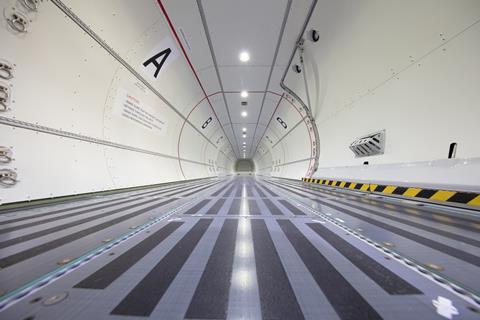 A bigger opportunity for regional aircraft manufacturers arguably lies in the P2F market – a vibrant demand for turning passenger types into freighters boosts residuals, extends the lifetime of airframes, and helps airframers shift more metal. ATR estimates that there are 140 of its aircraft flying as freighters, with 17 conversions delivered in 2021. Of the 10 secondhand aircraft shipped by ATR itself in 2021, eight were converted to freighters.

The e-commerce sector, with its need for next-day deliveries from central warehouses to consumers’ houses, is driving demand, believes Vautier. “Analysts say that half of all retail in the world will be online by 2024-2025, so there is huge potential,” he notes. Altogether, ATR forecasts a demand for 460 freighters over the next 20 years in the up to 9t category that its two turboprops compete in.

Slovenian regional carrier Amelia is typical of independent operators who have identified a niche in small-volume cargo. It took delivery of its first converted freighter, an ATR 72-600, in January. The 1995 airframe was originally operated by Air Caraibes, and converted for ASL Airlines in Ireland, according to Cirium. The Ljubljana-based airline says that “demand for air freight between European airports is growing rapidly” and its new freight operation will address this requirement.

Embraer is also hailing e-commerce as a disruptive force in the post-Covid recovery, reckoning there will be a need for 700 cargo aircraft in the up-to-150-seat segment over the next two decades. While the Brazilian firm has no P2F programme for its E-Jet family, it is looking “very closely” at a possible launch. Arjan Meijer, Embraer Commercial Aviation chief executive, said at last November’s Dubai air show a decision would be made within six months, with a “time-to-market” of around 24 months.

His colleague Rodrigo Silva e Souza, vice-president of marketing, argued at Dubai that there was “a need for a new size of aircraft” in the freight market. “We see exponential growth that requires different logistics and a smaller aircraft to address the needs of consumers in a more reliable way,” he said. “It is about same-day delivery, something that was initially the exception but has now become the rule. To have same-day delivery, you need the smaller gauge to increase frequency.”

De Havilland Canada – which acquired the Dash 8-400 (formerly the Q400) from Bombardier in 2019 – has launched a freighter conversion kit for the 74-seat turboprop, securing a launch order for 13 kits from Canadian airline Jazz in 2020. The so-called Simplified Package Freighter involves removing seats and seat-track covers from the cabin and strapping 17 cargo nets to the seat tracks, allowing up to 8,100kg (17,900lb) of cargo in 32.6cb m (1,150cb ft) of space, says the Toronto-based manufacturer. 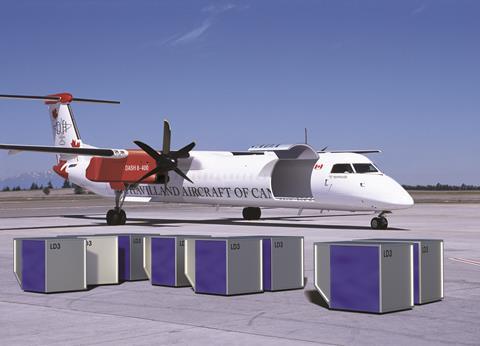 The conversions allowed Jazz to quickly reconfigure aircraft for essential freight services for its customer Air Canada during the height of the pandemic, says Philippe Poutissou, vice-president sales and marketing. De Havilland is also offering similar options for its legacy -100/200 and -300 variants, with Kenyan humanitarian services specialist 748 Air Services purchasing conversion kits for its four -100s as well as three -400s. Three undisclosed customers have also ordered the product.

De Havilland is also “working to launch” its own Package Freighter, says Poutissou, with five access doors as well as a large cargo door, cargo loading system and capacity for eight LD3 containers. However, unlike ATR, the company will not go down the route of launching its own production freighter, but instead offer service bulletins to MRO providers with “on-site support for the conversion, subject to discussion based on operator requirements”, adds Poutissou.

The company also offers a Cargo Combi configuration that “allows mixed passenger and cargo operation with separate compartments for quick turnaround”, which it is in discussions to launch as a retrofit. “We have had a number of requests for flying with 50 to 68 seats and an increased baggage compartment,” says Poutissou. “We already have a version, which seats 50 passengers and has an extended aft cargo hold, in service with Japanese carrier Ryukyu Air Commuter.”

Although the Covid-19 crisis prompted an urgent need for freighters in 2020, Poutissou anticipates the trend continuing as passenger flights and belly hold capacity returns. He expects the Dash 8-400 to be a popular option. “The cargo market is a natural outlet for early-build Dash 8-400s because of the type’s range capabilities, but also because it can provide access to remote regions and challenging airfields, such as those at high altitudes where similarly-sized aircraft struggle,” he says.

AEI has converted about 25 CRJ200s to freighters

Despite this, Robert Convey, AEI’s senior vice-president sales & marketing, believes the CRJ market will remain relatively small. The company, which was founded in 1958, focuses on mostly Boeing narrowbodies and only recently began offering CRJs. “It is a rugged airplane but the CRJ200 especially is too small for most needs. We have delivered 25 and might get to 50, but it has not been stellar,” he says. “We could look at doing [larger] CRJ700 or 900s, but even then it would be niche.”

The reason for his scepticism is that, in North America especially, trucking by road remains more economical than air freight at distances of up to 3,200km (2,000 miles), he maintains. E-commerce companies such as Amazon have invested in algorithms that predict consumer demand so well that most goods can be sourced from warehouses relatively near the end-user, and still be delivered next day, he says. “That is why [regional air freight] is never going to be a huge market.”

It is a theory that Vautier vehemently disputes. “The operator of the 72-600F is in the USA and North America is a very strong [P2F] market for us,” he says. “In North America and Europe if you want to deliver to smaller cities, an aircraft like an ATR makes sense.” In parts of Asia, where much of the population lives on islands and infrastructure is less developed, the case for regional air cargo links are even stronger as road haulage is not even an option, he says.

Below the regional aircraft category, there is another new contender in the air cargo sector, the Cessna SkyCourier. Textron Aviation has long been a player in the light utility market with its single-engined Cessna Caravan, but the twin-engined SkyCourier is the first new freighter platform for almost four decades. After a flight test campaign of 2,100h so far, the first production example was rolled out in January, ahead of delivery later this year to launch customer FedEx Express. 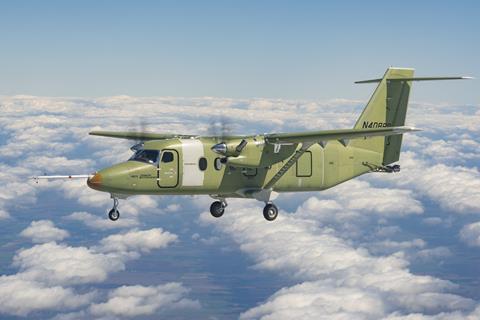 The Pratt & Whitney Canada PT6A-65SC-powered aircraft – 50 of which have been ordered by FedEx with another 50 options – has capacity for three LD3 containers and has a payload of 2,720kg. Lannie O’Bannion, senior vice-president sales, says the 918nm (1,700km)-range SkyCourier “serves a new 2.7t market segment previously only available with a Part 25 [air transport category] aircraft”. This, he insists, will “open up new sectors” for regional airlines and cargo operators.

“The average twin utility turboprop today is 30 years old, indicating that the market is ready for a modern replacement,” he says. “No other production aircraft in this space offers the low operating costs and capabilities that the SkyCourier will bring to high-utilisation customers. We believe the growth in air cargo demand, along with the SkyCourier’s combination of payload capability, performance, operating costs, and cabin flexibility will bring a lot of opportunities.”