I don’t know exactly when aviation became a passion for me – but I must have been very young, as it has captivated me for as long as I can remember. To me, aviation brings an exciting combination of travel and exploration, the latest technology and the freedom of the sky.

I’ve been fortunate to be able to get involved in different parts of the industry I’m passionate about, from an inexperienced single-engine pilot flying sky-divers in South Africa during my 20s, to the exciting world of airlines – and now one of the most remarkable pieces of aviation infrastructure, London City airport.

I think my journey thus far has been a combination of hard work and pure luck. I think being as passionate as I am about aviation certainly helped me make career moves to an executive level, but I have also been fortunate to have worked with some incredibly inspiring and talented individuals who have assisted me along the way.

I always viewed my qualification as a chartered accountant as a prerequisite in the world of business. When I joined British Airways – over ten years ago now – I felt that my training put me in good stead to offer insights and to contribute to the evolving IAG group. My current role as chief commercial officer for London City airport is certainly proving to be both the most challenging and the most rewarding of my career to date. 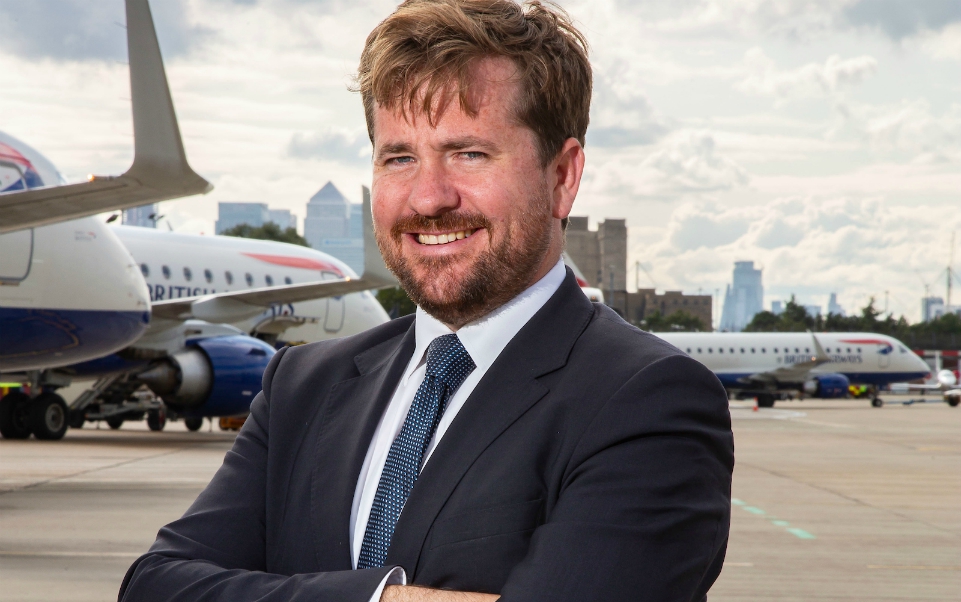 In my time at London City, a real highlight has been overseeing the changing nature of the airport, reflecting new airlines and different types of passengers, not just business travellers. That’s in part been driven by the new flag carriers I have helped attract to London City, boosting our global hub feed traffic and creating a truly global route network via the likes of Amsterdam Schiphol, Lisbon, Dublin, Zurich or Warsaw. Since I started as CCO we’ve seen the arrival of four new airlines – KLM returned to the airport in January 2017, followed by TAP Air Portugal the following month, Aer Lingus (as part of a leasing arrangement with CityJet) in October 2018, and LOT Polish Airlines in January 2019. The arrival of these carriers, each of them household names with stellar route networks, has been instrumental in moving the narrative along from London City being one of the UK capital’s “best kept secrets.”

The unique characteristics of the airport’s location, runway length and 5.5° steep approach angle mean that it’s a real team effort between the airport, manufacturers, and airlines to certify new aircraft. So it’s always a special moment when the latest generation touch down. In August 2017, Swiss operated the Airbus A220-100 (then the CS100) commercially for the very first time, and in July 2018, the Embraer E2-E190 visited on a test flight en route to Farnborough. It’s a thrill to see these sophisticated machines operate at London City, with the shark livery of the E2 test aircraft definitely turning some heads. We really see these quieter, cleaner and more fuel-efficient aircraft as being a key part of our growth plans, and we will continue to work with our partners certify the latest compatible aircraft and help our airlines re-fleet.

I have been in post as CCO since January 2017, where I have overall responsibility for commercial airline relationships and all other commercial activity including retail, food and beverage, parking, media sales, sales and marketing.

Alongside the airport’s aviation director, Peter Downes, I oversee the airport’s aviation strategy. There is real focus on diversifying the route mix with more leisure options, supporting the business community with frequent links to key European cities, and providing vital connectivity for places otherwise poorly served by the London airports. I am keen to bolster the choice of destinations, and fix some of gaps in our route map, like we achieved with LOT Polish Airlines for central and eastern Europe. Targets in mind include Scandinavian cities, premium European leisure destinations, and more domestic routes.

A key moment this year was the launch of a new brand identity for London City, led by our marketing team and marketing director, Neil Dillon. The new look reflects a more dynamic, vibrant and contemporary identity, synonymous with modern London. It fits with the new direction for the airport – serving a broader audience – from families to East Londoners on our doorstep. Indeed, over the summer we’ve been directly marketing to the London audience through an outdoor and print advertising campaign, reaching the traditional business hubs like Canary Wharf – but also the rest of London and the fast-growing East London boroughs around us, where there is a captive audience able to benefit from their most convenient airport.

The most enjoyable part of the job is probably the reaction that I get from peers, friends or strangers, when I say that I work at London City Airport. The reaction is 99 times out of 100 that “I love that airport”, “it’s so convenient”, or “that’s my favourite airport in London”. To me that demonstrates we’re doing something right. There is a great formula here, a brilliant team, and real spirit. But not for a moment am I complacent. Our current £500m [$605 million] development is so important to unlock the space and facilities needed to accommodate the continued demand and deliver that market-leading customer experience.

What is the long-term vision for London City airport?

We want to create a world-class gateway for London that appeals to all types of traveller through a passenger experience that they love. That means offering a great choice of destinations and airlines; quick, cost-effective and sustainable surface access to established and emerging parts of the city; and creating an amazing first and last impression of London within the new terminal facilities. The £500 million City Airport Development programme (CADP), which is under way, is central to this. Through significant extensions to the east and the west of the current terminal, we will create more space and capacity for our growing passenger numbers, world-class facilities and a range of options for all types of traveller, including a new lounge. The new terminal facilities will include 32 new units and 5,000sq m (54,000sq ft) of commercial space, so there’s an amazing opportunity to offer a real sense of place, and a flavour of London – modern and traditional. That extends to a dynamic food and beverage offer, the brands on the shelves, and the experiences and storytelling within the airport.

Looking beyond the development, the latest passenger forecasts, as set out recently in our draft master plan 2020-2035, suggest we may welcome 11 million passengers by 2035, which is a truly exciting prospect and demonstrates London City’s vital role in the London airports system. Hand in hand with this, we want to encourage our airlines to accelerate their investment in new generation aircraft – with a target for 75% of all jets to be new gen aircraft by 2035. These aircraft can unlock new destinations and markets, thanks to their longer range, economical operations, and lower emissions than their predecessors. We are just at the start of an exciting next chapter for London’s most central airport.

There are definitely challenges associated with running an airport while undertaking a £500m development programme. For me, the priority is balancing this vital project while prioritising our passengers and airlines. There is also an ongoing challenge to shake off out-of-date perceptions of London City Airport as an airport just for bankers. While the business community will always be vital for the airport, there is increasing parity with leisure travellers – around 50% of passengers last year, based on the UK Civil Aviation Authority survey. The airport is rapidly becoming a London gateway for everyone.