Despite the use of advanced design tools, the team developing NASA’s X-59 Quiet Supersonic Technology (QueSST) demonstrator cannot be sure it will meet their “low-boom” goals until the jet actually breaks the sound barrier in flight. Although design features that reduce sonic booms are understood, the team faces the challenge of ensuring that the X-59 QueSST retains its unique boom-softening shape while in flight. It is also unclear how sound from the jet will move through the atmosphere.

Those questions will be answered through flight testing, which the team expects will begin in autumn 2021. 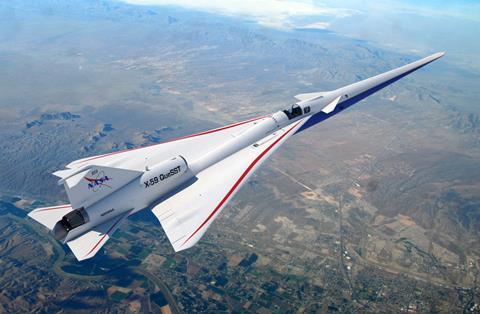 “When you get a real aircraft in a real atmosphere, there’s a lot of variables that are difficult to model,” says Craig Nickol, manager of NASA’s Low-Boom Flight Demonstrator project, the effort behind X-59. “How that signature propagates through the atmosphere becomes difficult to predict.” But Nickol and partners at Lockheed Martin think the X-59 will prove that supersonic aircraft can have acceptably soft booms, possibly leading to a supersonic air travel renaissance.

Part of NASA’s broader Low-Boom Flight Demonstration mission, the X-59’s purpose is to demonstrate design features that can reduce booms, and to test how the public perceives softer sonic noise. NASA will eventually deploy the X-59 on “community flights” over the USA, collecting public perception data in the process. It intends to give that data to regulators like the Federal Aviation Administration, which could use it to allow some form of civil overland supersonic flight. US regulations have banned such flight for decades, but the FAA has already started work related to updating its rules.

“We are planning to take the aircraft out into the US, in different communities, and do overflight studies,” Nickol says. “We are pretty confident that if we gather community response data at those levels we should have something fairly positive to show the regulators.”

The X-59’s development comes as private companies such as Aerion Supersonic, Boom Supersonic and Spike Aerospace move forward with development of faster-than-sound business jets and airliners. “We’ve been stopped for the last 40 years in progressing to faster and faster aircraft,” says David Richardson, X-59 programme director at Lockheed’s Skunk Works unit. But this project, he says, could “open up a whole new type of aviation”.

In 2018, NASA awarded Lockheed a $247.5 million contract to handle X-59 conceptual and detailed design, development, manufacturing and flight testing. Lockheed is assembling the aircraft at its Skunk Works site in Palmdale, California, and has 130-140 staff assigned to the project. One jet will be built.

The single-pilot aircraft, with a fuselage of about 30m (98ft) in length and a 9m wingspan, is being designed to cruise at 55,000ft and Mach 1.4, NASA says. The team projects that the X-59’s unique design features will give it a sonic boom of less than 75 perceived dB on the ground – like “distant thunder” or “neighbours shutting a car door”, says Nickol. “If you are not really listening for it, you may not even notice it.”

By comparison, Concorde had a boom of 105 perceived dB.

The X-59 will be powered by a single 22,000lb-thrust (98kN) GE Aviation F414-GE-100 engine, which is a variant of the engine powering the Boeing F/A-18E/F Super Hornet fighter. The engine will be integrated into the X-59’s empennage. GE has a contract to supply the programme with two F414s and has already delivered one.

Though its design is new, the X-59 will make use of components found on other military jets – a tactic aimed at keeping costs low. It will have the Lockheed F-16’s landing gear, the F-117A Night Hawk’s control stick and the Northrop Grumman T-38 Talon’s cockpit and canopy. “The challenge is to integrate these systems that were designed for different airplanes… To have it all work together in this airplane,” Nickol says.

The design features that help soften sonic booms have been known for some time, and the US government tested such features in 2003-2004 using a modified Northrop F-5E Tiger.

One key feature is length. “If you look at the design of the X-59, you’ll notice it is very long and skinny,” says Nickol. “That’s on purpose, of course, because we are trying to spread the shockwaves out.”

Shockwaves start at an aircraft’s nose, move aft and come off “all the major elements of the aircraft, all the way to the tail, and even off the engine plume in the back”, he says. The X-59’s slender design helps prevent those shockwaves from “coalescing into a strong shockwave that causes a sonic boom on the ground”, he says.

Richardson adds that the aircraft’s “fineness ratio” – its length to its diameter – “is one of the driving design features” that enable softer sonic booms. But other features play a role. For instance, the team designed the jet so that most external features are on the top of the aircraft. That helps shock waves emanate up, not down, they say.

The tail also proved challenging. “You’ve got the inlet and the exhaust of the engine. You’ve got the aft end of the wing, and then the horizontal and vertical t-tail. You have a lot of stuff going on back there,” Nickol says. Each of those features “creates a disturbance or discontinuity in the airflow, and we don’t want the shock that would be generated by those discontinuities propagating downwards”, adds Richardson.

Engineers also equipped the X-59 with an “aft deck” – a structure under the engine nozzle that extends aft for the purpose of keeping shockwaves coming off the exhaust from emanating down. “You’ve got to have some pretty exotic materials on that aft deck to protect it from the heat,” Nickol says.

Because pressure differentials created by lift also drive “near-field shockwaves” and, ultimately, sonic booms on the ground, engineers had to “carefully balance the lift and area distributions over the vehicle while also optimising controllability”, Nickol says, adding that they also had to “smooth out” the lift distribution. To achieve all of that involved optimising structures including the wings (placed relatively far aft), canards, a horizontal tail and a “t-tail” atop the vertical tail. Those features also create control challenges, requiring X-59 to have multiple control surfaces. As Nickol puts it, taking into account all those variables is a ”multidisciplinary optimisation problem”.

The X-59’s cockpit will have side windows but no forward windscreen, which would generate strong shockwaves. Therefore, the aircraft will have a NASA-developed external visibility system. That system will use a forward-facing camera to generate images that the pilot will view on a display inside the cockpit. “The pilot essentially looks through an electronic window to get his forward vision,” Nickol says.

Nothing about the X-59’s design or manufacturing “is a technical step forward”, says Richardson. But the challenge for engineers is ensuring the jet retains the desired shape while in flight, when the wings are flexing. “The criticality is for us to hold that shape, so that we can then produce the sonic boom that we predicted,” he says. “That’s where a lot of the care is being taken.” 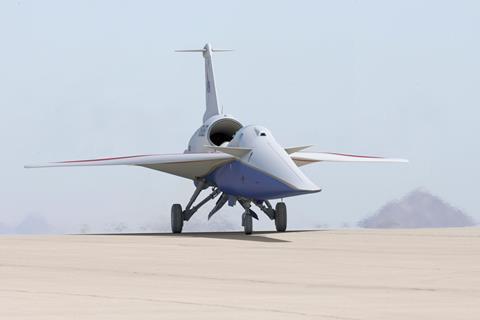 The team completed the aircraft’s critical design review in September 2019. NASA’s X-59 staff have worked remotely during the coronavirus pandemic, which has slowed development of some flight hardware. “When we get back from this virus we are going to have to catch up and make sure we can deliver that equipment to Lockheed,” says Nickol.

Meanwhile, Lockheed’s Skunk Works has continued manufacturing the jet. Workers are now assembling the aircraft’s three major subsections: the fore-body fuselage, main-wing mid body and tail empennage. The aircraft’s principal structure is built from aluminium, although it has composite control surfaces and wing skins and titanium in high-temperature sections of the empennage.

“Once those are fabricated, there will be… a major assembly mate, when we put all three together. That’s the first time we… have an airplane,” Nickol says.

Then will come subsystem integration and testing, and ground testing. The team’s next major milestone will be a flight readiness review, which it expects will occur three to four months prior to first flight, planned for autumn 2021.

The flight-test programme will involve a roughly nine-month envelope-expansion phase. The timeline has Lockheed delivering the aircraft to NASA in 2022, after which the agency will begin about nine months of “acoustic validation flying” and other tests from the Armstrong Flight Research Center.

Overland flights to test public perceptions will then follow – to see if it all was worthwhile.

“We have a lot of computer analysis… but you really don’t know until you’ve actually built it and flown in a real atmosphere at full scale,” says Nickol. “That’s the other exciting thing – to see if all the analyses and design of the past many decades actually will work in real life.” 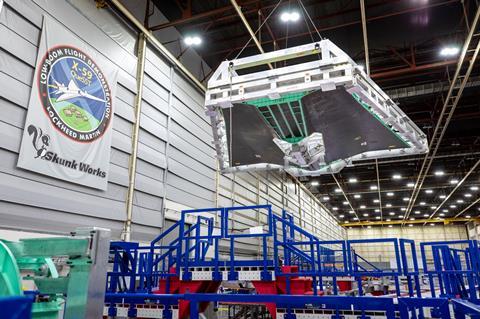