As the last decade was nearing an end, the UK unveiled and then expanded an ambitious programme to develop a new class of future combat air systems (FCAS) with the potential to bolster not only its military capability, but also the fortunes of its defence industry.

Had the coronavirus outbreak not intervened, the nation’s Tempest project would again have grabbed headlines from 20 July at the Farnborough air show – the same location where it was revealed with great fanfare in 2018. 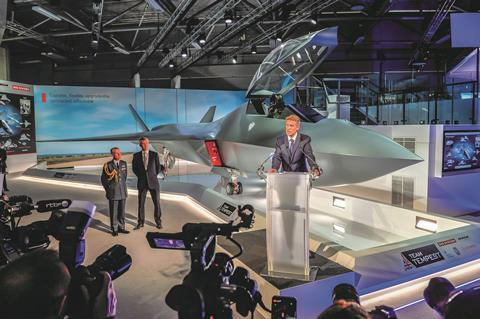 Buoyed by the signature of agreements with Sweden and then Italy last year, the UK’s plan to develop a variety of equipment to succeed the Eurofighter Typhoon in service from the middle of next decade has since made quiet but steady progress.

A Team Tempest industry team brings together the expertise of national defence champion BAE Systems and propulsion house Rolls-Royce, along with the UK arms of Leonardo and MBDA. Working with the Ministry of Defence (MoD) and the Royal Air Force (RAF) Rapid Capabilities Office, their collective ambition is to deliver a new manned fighter, along with unmanned systems – operating as a so-called “additive capability” – and increasingly sophisticated and networked air-launched weapons.

A notional Tempest fighter shown at the last Farnborough event gave some indication of the UK’s thinking, but a firmer set of concepts is now shaping up, ahead of the delivery of an outline business case proposal to the MoD at the end of this year.

“BAE Systems and our industrial partners in Team Tempest will be supporting this submission with evidence of our technology and transformation progress to help deliver confidence that UK industry will be well positioned to help lead the design and development of a next-generation combat air system,” says Andrew Kennedy, strategic campaigns director at BAE Systems Air.

Despite the disruption caused by the coronavirus crisis, and the Brexit process before it, the timing of the proposal’s delivery remains on the schedule set within the UK’s overarching Combat Air Strategy document, published in mid-2018.

“Throughout the lockdown period, we have continued to work in collaboration with the MoD and our Team Tempest partners, and at this point, we have been able to minimise any impact on our work,” Kennedy says. “We are confident that any short-term delays can be mitigated as we continue to progress according to the original timescales – and ultimately achieving initial operating capability in 2035.” 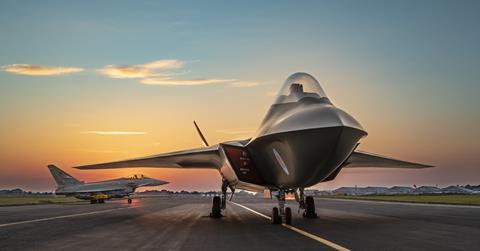 While it was light on specific programme details, the Combat Air Strategy document made much of the need for international participation as a means of reducing overall programme costs.

“Effective international partnering and collaboration in the combat air sector offers the UK the best opportunity to deliver our military capability requirements while managing cost and maximising wider national policy and prosperity outcomes,” it states. “Value for money in acquisition is heavily dependent on programme volume to offset upfront investment in research and development. Our approach to partnering will seek to achieve this, including through exports… [and] leverage the technological and industrial strengths of our partners to further drive down costs.”

A first trilateral meeting involving key personnel from all three nations was conducted online in May, underscoring the building relationship between them, both at a government and industry level.

“We are working with Sweden on a long-term roadmap for UK/Swedish co-operation in combat air, including a collaborative FCAS acquisition programme, detailed research and technology studies and enhancing information sharing,” BAE says. This follows the signature of a 10-year, bilateral memorandum of understanding at a government level, followed by another pact covering manufacturers. 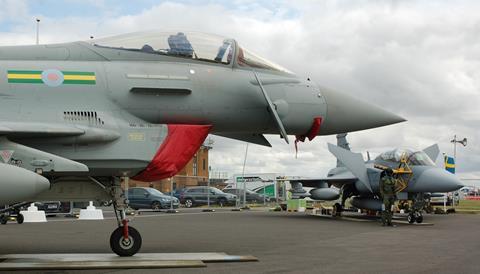 “We have taken the industrial collaboration further, in terms of what needs to be done by different parts of the industry,” Saab chief executive Micael Johansson said in late April. “We focus completely on the UK-Sweden collaboration, and look into how Italy will join and to what extent,” he adds.

“It’s a very good collaboration so far, and excellent with industry and also government to government,” he says. “I think we have good concepts and a good approach to this – a rather wide approach, not locking us into concepts too early.”

Of Rome’s involvement, BAE says: “Detailed discussions have been progressing at a government-to-government and industry level. We are developing a combat air roadmap together as we mature our discussions on Tempest requirements.”

One of the UK’s other key objectives with Tempest is to adopt a new model for international partnerships, along the lines of the “best athlete” approach used by Lockheed Martin for the F-35 Lightning II.

“We absolutely want the best players involved and we see this being best achieved through collaborative international partnerships which will develop a flexible, affordable and exportable product,” Kennedy says. “We will continue to engage with existing and potential new partners to ensure we develop an optimal partnership that meets the needs of all participants.”

Other nations could still join the Tempest effort, and dialogue has continued with Japan.

How such an “innovative, agile industrial collaborative construct” will work in practice is among the topics now being discussed by the UK, Sweden and Italy.

“This is a long journey,” notes Alastair Morrison, Leonardo’s deputy managing director UK. “There needs to be alignment of intent going right out to entry into service around 2035 and beyond.

“Both of the international partners are really gearing up, and there seems to be a real eagerness to take things forward,” Morrison says. “The challenge that’s in front of us for Tempest is to be a viable programme for the UK, and for Sweden and Italy.”

Pointing to his company’s long experience on the four-nation Eurofighter programme, Morrison notes: “We are going to have to do things differently to what we’ve done before. We are going to have to be a lot more genuinely co-operative. We know the things that have worked not so well in the past – we are going to make sure that we don’t make the same mistakes going forward.

“In Typhoon we had a certain way of working, and a lot of the things that are good and some of the things that are more difficult come from that way of working. With Tempest, we realise that can’t apply again – technology and life is different now. We can’t go about duplicating a whole lot of infrastructure, or making things so fragmented that you don’t get the commonality in purpose.”

While the MoD and its Team Tempest partners finesse their approach to international involvement, much work has been done to assess the breadth of technologies required to deliver an FCAS capability.

“We have made tremendous progress, achieving a number of important milestones,” Kennedy says. “Across Team Tempest, there are six different technology-led workstreams working in parallel. Key to the success of this – and to the evidence which must form part of the outline business case – is that we are able to demonstrate how we are transforming the way we work to ensure that we can deliver this future combat air capability faster, smarter and more cost-effectively than ever before.”

For BAE, this process has included employing digital design tools and model-based systems engineering techniques, along with exploring the potential workings of a “factory of the future” at its Warton final assembly site in Lancashire.

“This includes partnering with small and medium-sized enterprises, academia and industrial organisations in sectors we have never traditionally partnered before – from automotive manufacturers to computer game developers,” Kennedy says.

“All of these efforts so far are already showing benefit. We have examples of work which would have previously taken two or three years being done in a matter of weeks.”

MBDA, meanwhile, used the DSEI exhibition in London in September 2019 to reveal several conceptual weapons it believes could be used by an operational FCAS.

“Being a Team Tempest partner, involved from the inception, is helping ensure that innovative weapons systems complement the cutting-edge design and the novel technologies of the platform around them,” it says.

In addition to a pair of deep-strike cruise missile designs, its display also showed a ground-attack “micromissile”, and a derivative “hard kill” defensive weapon. 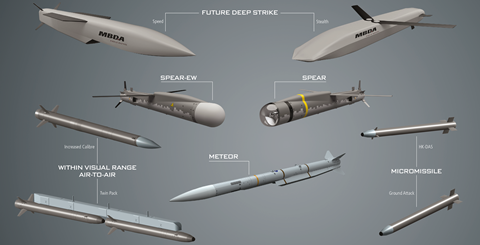 Along with BAE, MBDA is also exploring what it describes as “innovative payload bay and launcher concepts, [to] facilitate an improved weapon load-out”, such as a space-saving twin launcher for use with short-range air-to-air missiles.

While firm details of the development work being conducted in support of the UK’s future combat air capability will be closely guarded, one of the Tempest project’s most visible early activities will involve a second-hand airliner first flown a quarter of a century ago.

Retired by TUI in November 2019, the Boeing 757-200 (G-BYAW) has been acquired by 2Excel Aviation for conversion into a flying testbed, under a subcontract from Leonardo.

Cirium fleets data indicates that the winglet-equipped twinjet – which accumulated almost 87,000 flight hours and 29,300 cycles in commercial service from April 1995 – will enter a conversion phase in June 2021, with work to conclude by the end of the following year.

The R-R RB211-powered 757 is currently in storage at 2Excel’s facility at Lasham airfield in Hampshire.

Morrison tells Flight International that the process for defining the ex-airliner’s future configuration has yet to be finalised. However, this is likely to be akin to Lockheed’s 737-derived co-operative avionics testbed, nicknamed the CATBird, which was flown during the F-35 programme’s development phase. This would require the integration of multiple sensors, including an active electronically scanned array (AESA) radar, to support trials. 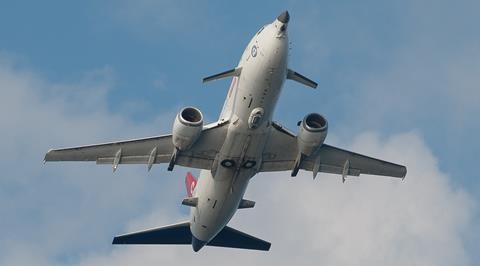 Morrison says that while “instrumented hack” aircraft were used to test avionics equipment during the Eurofighter’s development, the approach adopted for Tempest means that Leonardo has been working closely with BAE, MBDA and R-R from the outset this time.

“Because of the integrated nature of the sensor suite with the other features that we’re putting forward, it’s regarded as an essential thing that we have to do,” he says of the testbed. “This is going to have to be versatile – we want to make sure that we can get the maximum use out of it.

“Everything that we are producing this time round, there will be a lot more integration about it, and a lot more on the software side,” he says.

While a Tempest platform would use AESA technology, Morrison notes: “How it will be embodied on the overall system is one of the things we are studying at the moment. We are starting from an architecture point of view – not with sensors stuck on the aircraft, but at the heart of the design.”

Summing up the work conducted since the Tempest concept’s unveiling two years ago, Morrison says that “Domestically, there is a huge amount of activity going on just now.”

While the economies of the UK and its two international partners will face a period of unprecedented stress when exiting the coronavirus crisis, Kennedy argues that the need to advance with the next-generation fighter capability remains undiminished.

“We do not know yet what the full economic and social consequences of the pandemic will be, but it is clear that stimulating the economy and the benefits that brings will be a national priority,” he says. “Tempest is well positioned to help drive this recovery.”