A high school programme gave Allison Bennett her first experience of flying an aircraft, setting a course for the Ontario pilot to become the first woman to captain a CL-415 water bomber.

Allison Bennett recalls rising above the lakes and forests of northeastern Ontario, Canada in July 2018 and seeing dozens of lightning-sparked wildfires on the horizon.

She was looking at a busy workday as a De Havilland Canada CL-415 water bomber pilot. One wildfire was particularly urgent. Fuelled by dry conditions and high winds, the blaze was moving rapidly toward Temagami – a town about 60 miles (100km) north of Bennett’s hometown of North Bay. 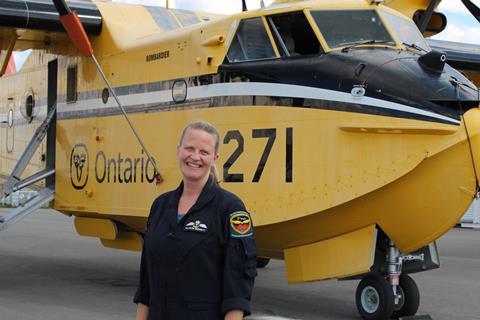 “It was close to home for me and that made it much more of a challenge,” Bennett says. “I had to make myself stay calm and not let it get personal and just do the job we’ve been trained to do.”

All nine of Ontario’s CL-415s were dispatched to the fire and, along with firefighters on the ground, helped prevent Temagami from being damaged or destroyed.

“I happened to be with a very experienced captain at the time,” Bennett says. “It was very smoky and difficult to see, and I remember getting one [drop] into the head of the fire and thinking, ‘That was the game-changer right there’.”

Bennett, 44, has flown five seasons as a water bomber co-pilot for Ontario’s Ministry of Natural Resources and Forestry. This past summer, she is believed to have become the first woman to captain the CL-415. Her former colleague Emily Crombez was the first woman to pilot the aircraft.

“As far as I know from people in the industry, there aren’t any other women as captains of the -215 or -415 water bombers yet,” Bennett says.

Bennett grew up boating and camping on the area’s abundant lakes. She was also thrilled by seeing a stealth bomber and demonstrations by the Royal Canadian Air Force’s Snowbirds aerobatic display team at local air shows. With CFB North Bay, Canada’s centre for air defence, in her backyard, she has always been immersed in aviation.

In high school, she enrolled in an aviation programme that put students through ground school and into an aircraft and a helicopter.

“I was very fortunate, as a kid, to have that opportunity,” she says. “Taking off and looking around and seeing all the trees and lakes, the vastness of what was outside the city, was what got me hooked on flying. It gives you the perspective that there’s something bigger out there.”

Her career as a pilot started in 2002, when she got a job as an instructor at an aviation school in North Bay. In 2005, she began flying as a wildfire detector and discovered the ‘birddog’ role – piloting aircraft that fly ahead of water bombers to describe fire conditions, scout for hazards and lead the way.

“If there’s a specific spot you need to hit, the birddog leads the water bomber in,” Bennett says. “You’re low level and you pull up and point your tail to where the spot is, then you have to come around and show the air crew officer the drop. You end up doing a low-level manoeuvre that is just awesome; I thought it was a really cool job.” 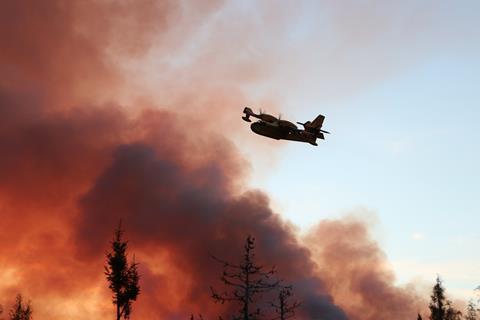 As a birddog pilot, she saw the CL-415 in action and knew she wanted to get in its cockpit. But she needed more time flying on floats before she could pilot the amphibious type. She went to the Maldives in the Indian Ocean, where she flew passengers in De Havilland Canada DHC-6 Twin Otters. She started as first officer and made captain after less than two years.

Her competency in the role was sometimes questioned; male passengers would occasionally offer to help her load luggage into the aircraft, “trying to be gentlemen”, Bennett says. “Eventually my captains would explain, ‘No, it’s okay – she’s got it.’”

In 2012, she returned to Canada and started flying Twin Otters configured with water-bomber floats, which are only found in Ontario, Bennett says.

That set the stage for her to fly the CL-415, which is designed to land on water and scoop water into its tanks. The scoops are open for about 11 seconds, with the CL-415’s turboprop engines operating at full power to overcome drag. With an endurance of 4h, the aircraft can perform dozens of drops in a single mission.

“In Ontario, we’re very fortunate that we have lots of lakes to choose from,” Bennett says. “If we can find a lake that’s close to the fire, we can be very effective and very efficient – sometimes scooping and dropping with a two-minute turnaround.” 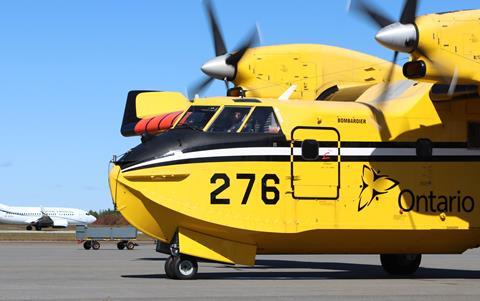 During fire season, Ontario’s water bomber pilots work 12h per day – 10 days on, four days off. A single mission can be exhausting. But Bennett is always up to the challenge – and believes other women are, too.

“It’s a tough industry,” she says. “It’s a tough job for anyone. But why can’t we do it? We can do whatever we want. Whatever is required, I am able to do the job.”