The requirement to decarbonise aviation could arguably not have arrived at a worse time for the global aerospace industry: just at the point at which the sector is attempting to ease its way back to financial stability following the ravages of Covid-19, there comes the need to spend unprecedented sums on research and development projects.

While many of the technologies required – particularly those that will increase an aircraft’s efficiency – do not represent a complete pivot away from previous research efforts, the new emphasis on zero-emission propulsion technologies, notably hydrogen, is a significant shift. 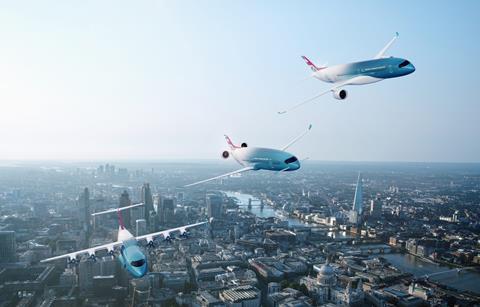 That switch, of course, comes with both risk and opportunity: whoever masters these new technologies stands to reap the financial rewards; on the flip side, however, the companies or countries that specialise in disciplines which stand to be fundamentally changed are in danger of losing their leadership position.

For UK aerospace, the risk is real. In the executive summary of its year-long study into the feasibility of zero-emission flight, released in March, the Aerospace Technology Institute (ATI)-led FlyZero project concluded that the country’s specialisms – airframes, wings, fuel systems, thermal management, and turbine engines – are among those likely to be most affected by a potential switch to liquid hydrogen as a fuel.

“All these elements would need to be redesigned for a hydrogen aircraft, presenting the UK with both a threat and an opportunity,” it says. “If the UK acts ahead or alongside other nations, it can lead the development of new technologies where it is currently strong and secure a greater share of activity.”

And as ATI chief executive Gary Elliott and FlyZero project director Chris Gear note in their foreword to the executive summary: “The UK is ideally positioned to build on decades of expertise in aerospace innovation to develop, test and certify the advanced technologies which will propel a new generation of liquid hydrogen-powered aircraft into our skies.”

But that will require rapid action to secure future work: in order to win a place on any programme entering service in the 2030s, “UK companies must be ready to demonstrate new systems by 2025”, FlyZero says. In essence, those developments must be brought to technology readiness level 6 by that point, it says.

The reward? The UK could potentially see its share of large commercial aircraft global market turnover rise from 13%, or £11 billion ($13.8 billion) in 2019 to 19%, or £36 billion, in 2050. Conversely, if the nation does nothing, then market share could fall to 9%, the number of aerospace jobs could drop to 74,000 from 116,000 at present, and “crown jewel technologies” could be relocated overseas.

FlyZero’s research has already had an impact, shaping the ATI’s latest technology strategy, Destination Zero, which was released in late April.

Pursuit of all three technology streams is an “imperative” for the UK as they are “interdependent and mutually supportive”, says the ATI.

But this grand ambition is largely moot if the funding – whether public or private – to support the research required is not in place. Here, there has also been progress: following a difficult 2021 when the ATI had to suspend applications for new grants due to a pandemic-driven cash crunch, the government has now said it will provide an industry-matched £685 million to the body over the next three years; an increase over the £235 million of the previous period. Additionally, the ATI will also now be supported until 2031.

Sophie Lane, the ATI’s chief relationships officer, welcomes the investment uplift but recognises there will be “a lot of competition for the funding available” given the scale of the challenge and the industry’s broader financial state. 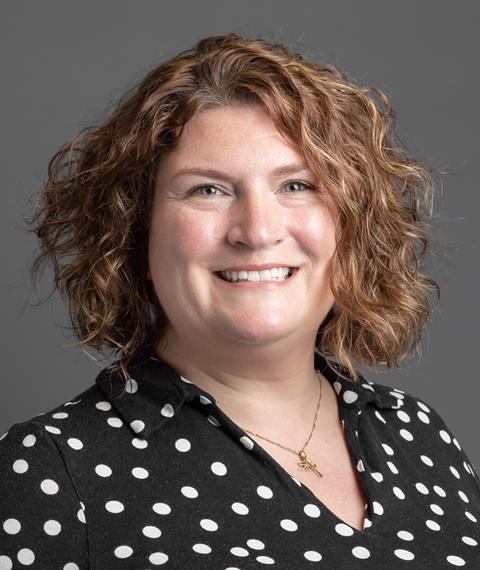 “We will need to make some clear choices about where we invest that money,” she says.

Overall, she is “encouraged by the amount of support that the government is willing to give at this time”, adding: “I think this will allow us to focus clearly on what needs to be done and to make clear choices.”

However, there will need to be a “sustained commitment” from both government and industry until the end of the ATI’s current term, she says. “That really allows you to not only invest in the technology development, but also ensures that you get the environment in which that technology can be adopted.

“In many ways, those are the areas that worry me more than the technology,” adds Lane, noting the “chicken and egg” nature of the investment.

To an extent, the wider infrastructural and operational considerations will be addressed by the UK’s newly created Zero Emission Flight Delivery Group, a body that sits under the existing cross-industry JetZero Council. The collaborative approach taken by the ATI is also crucial, argues Lane. “When we made our [funding] application and in our discussions with government, the fact that the industry was willing to invest was incredibly important.

“I also think industry is really ambitious about what can be done. And there is a huge opportunity coming with the zero-carbon market because globally there is a lack of [technology] maturity.”

However, she is acutely aware that there are plenty of countries dangling financial carrots at the aerospace industry in the hope of securing inward investment. “So really all we are trying to do is show why the UK is a good place to invest and a good place to do that technology development.”

On the face of it, Brexit would appear to be a factor in the UK’s thinking, pushing London to re-enforce its position outside of the EU through higher spending. While acknowledging a likely impact from the UK’s withdrawal from the bloc, Lane thinks it is “the technology advances in the last two years [which] have fundamentally changed the conversation about what the art of the possible is”. It is this, rather than politics, which is driving the need to invest, she believes.

There are already signs that the funding committed to the ATI is having an impact. Announcing the establishment of a Zero Emission Development Centre (ZEDC) focused on hydrogen technology research at its Filton site near Bristol in late May, Airbus cited the financial uplift as a factor behind its decision.

“This, coupled with our partnership with the ATI, will allow us to leverage our respective expertise to realise the potential of hydrogen technology to support the decarbonisation of the aviation industry.”

Airbus had previously said it would set up ZEDCs at its facilities in France, Germany and Spain.

Continuity also appears to have played a role. “We can continue to invest in one of our largest [research and technology] programmes, the ‘Wing of Tomorrow’, based in Bristol and Broughton, and launch new [research] development around fuel and landing systems,” adds Airbus chief executive Guillaume Faury.

The progress on Wing of Tomorrow – another ATI-backed project – is illustrative of a broader point raised in the Destination Zero strategy: although not directly related to zero-emission flight, the development of ultra-efficient aircraft forms a vital component in the overall drive to lowering aviation’s carbon footprint. 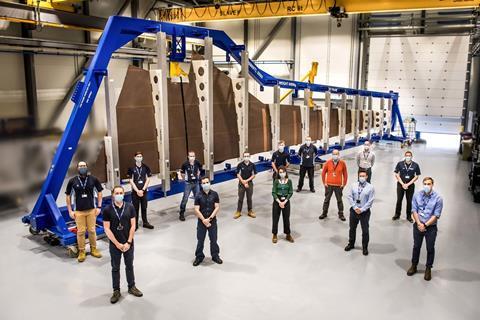 As such, Lane estimates that at least 50% of the projects that the ATI funds in future will be a continuation of previous work. While some projects – for example Rolls-Royce’s ACCEL electrification programme – have a logical end point, there are others, like Wing of Tomorrow and the engine maker’s UltraFan programme, which could naturally carry on.

But the financing of UltraFan also highlights another important point: the global nature of aerospace means that it is nigh-on impossible for the UK to act in complete isolation. Many of the technology bricks used in the UltraFan demonstrator – its Advanced Low Pressure System, for instance – have been developed thanks to funding from a variety of sources, including the ATI, its German equivalent LuFo, and the EU’s Clean Sky initiative.

Alan Newby, director of aerospace technology and future programmes at R-R, believes it will be vital that those multinational efforts continue in order to “maximise synergies between European and national programmes” to ensure “there is no discontinuity” between the research activities in different countries. 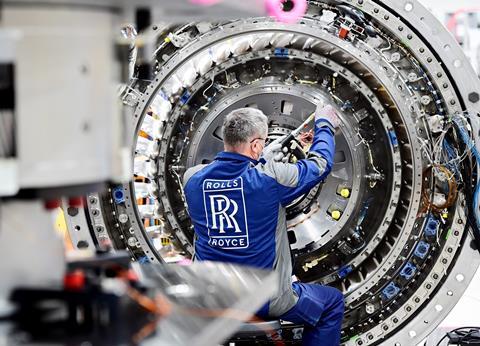 Plus, the sheer level of investment required will drive companies and nations down the collaborative route, he adds: “We need to look at all possible funding sources to bring things together.” Or, as the ATI puts it: “As aviation addresses the challenge of zero carbon and complex new mobility markets, the industry must develop a vast swathe of new technologies in short order and no single country can accomplish this alone.”

Despite Brexit there appears a strong likelihood that UK firms will still be able to benefit from the Clean Aviation programme, the EU’s successor to Clean Sky. However, how deeply they will be involved is as yet unclear: although UK companies will be allowed to participate, their eligibility for EU funding hinges on London signing up to the Horizon Europe programme as an associate country.

If that does not take place, UK entities can form part of a bidding consortium but will not receive EU funds, instead potentially seeking additional financial backing at national level.

Lane says the UK has “an incredible amount that we can offer in this sector” and thinks it would be “disappointing” if companies are unable to take part. “We will continue to work as hard as we can to support their applications,” she adds. 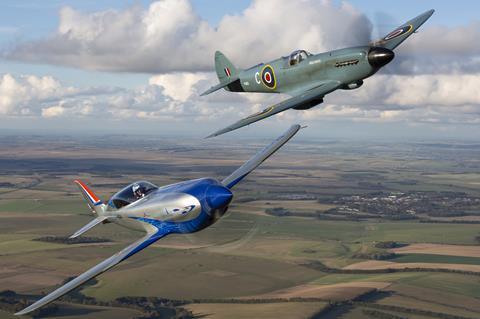 Newby says the advice R-R is receiving from the government is to apply for funding through Clean Aviation as the UK is keen to be an associate country to the effort. “Clearly we have a footprint outside the UK which we could use, but our prime role is in line with the guidance from the UK and we are planning an association to the programme.”

But what if UK entities can take part in but not obtain funding from Clean Aviation? “There needs to be an alternative if they can’t participate,” says Lane.

At its heart, an investment in research and technology is a bet: it is a wager that whatever is developed or validated can eventually be commercialised. In normal times the aerospace industry tends towards a safe bet, but the capacity to tolerate higher levels of risk at institutional level may now have to rise. Indeed, the ATI argues that firms will have to “accept more risk within their technology portfolios to make the advances that will be needed”.

However, as many observers have noted, aviation appears to be on the cusp of a revolution as significant as the dawn of the jet age, with substantial rewards available for those that back the right horse.

“There’s a lot happening now that could fundamentally change the way we fly in the future,” says Lane. “But to do that we are going to have to make some investments that might not pay off and we’re also going to have to learn lessons quickly and apply those into development. And that’s going to mean for some people that they have to take a number of risks that maybe corporately they wouldn’t ordinarily.”