The Boeing 747-8 will introduce an upgraded cockpit that borrows technology from the 777 and recently launched 787 programmes, but still shares a common pilot type-rating with the existing 747-400. 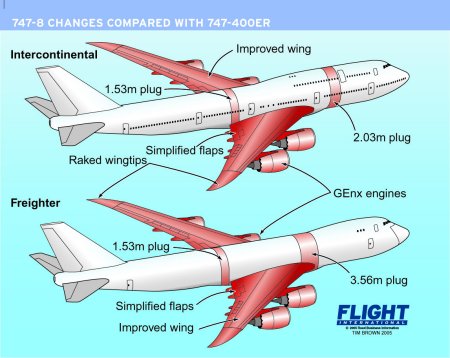 “We left the [wing] planform and the location of the structure the same,” says Peace, to allow existing production tooling to be used. The 68.5m-span wing will incorporate new materials and thicker gauges and has also been “retwisted and relofted”, says Peace. The aircraft will use a strengthened landing gear fitted with 777 tyres.

Overall, there will be 80% parts commonality with the 747-400 for maintenance purposes, Peace says.

To cut production costs, Boeing is trying to reduce the number of airline customisation options. This will, for example, mean that a satellite communications antenna will be fitted as standard and there will be a single wheel and brakes vendor, says Peace.

The 747-8’s 66,500lb-thrust (296kN) GEnx-2B67 engines will use the same core as the bleed-enabled version of the 787’s bleedless powerplant that is under development for the Airbus A350, but married to a smaller 2.64m-diameter (104in) fan to avoid having to introduce a taller landing gear.

The -8 Intercontinental passenger version will be equipped with the recontoured “Signature” cabin recently introduced on the 747-400ER.

Maximum take-off weight will be just under 436t (960,000lb), up from the 413t of the -400ER, and the operating empty weight of the passenger version is likely to come in at around 181t, although “we’re still working with aerodynamic trades”, says Peace.

The configuration of both -8 models is due to be frozen in the third quarter next year. High-speed windtunnel tests will be carried out early in 2006, followed by low-speed trials in May.

The first -8F is due to be rolled out in the third quarter of 2008 and fly by the end of that year, followed by entry into service in September 2009.