General Electric has issued a service bulletin calling on airlines to perform regular inspections of first and second stage high-pressure turbine disks on some CF6 turbofans, a move that follows an uncontained engine failure in 2016, GE confirms.

In addition, the Federal Aviation Administration may issue a related airworthiness directive, according to documents released by the National Transportation Safety Board (NTSB).

The board's documents provide an update of the investigation into the uncontained failure of a CF6-80C2B6 on an American Airlines Boeing 767-300 at Chicago on 28 October 2016.

The incident and subsequent fire badly damaged the aircraft, registrationN345AN, and caused serious injuries to one passenger.

The NTSB has not yet issued a determination of probable cause.

Some 4,000 of those disks were produced between 1984 and 2000, by which time melting processes had improved, says GE. As many as half of those disks have been retired, and "approximately 1,000" CF6s produced during that period remain in operation, according to GE.

"We don't believe the inspection programme will impact the operation of [the] CF6-80C2 fleet in service," the engine maker says, adding that the recommended inspections involve an "ultrasonic immersion process".

In addition to GE's action, the FAA "has indicated that it may issue airworthiness directives mandating" the recommendations in GE's service bulletins, say new NTSB documents.

The FAA's spokesperson was not immediately available for comment.

The second stage disk of the American 767's right engine ruptured as the aircraft, bound for Miami, accelerated to near 100kt along runway 28R at Chicago O'Hare International airport.

"He looked at the airspeed, which showed exactly 80kt, and a few seconds later he heard a 'ka-boom' and felt a slight pressure bump," the captain told investigators, according to the NSTBs operational factors report.

"He described it as 'running over a pothole at 100kt.' He further stated that the airplane shook and he thought it felt as though it leaned to the right," adds the report.

The captain aborted the takeoff and stopped the aircraft with 1,151m (3,775ft) of runway remaining, according to the NTSB.

The fire, however, left the aircraft a charred wreck, destroying the right wing and damaging much of the fuselage. American has written off the aircraft as a total loss, according to Flight Fleets Analyzer.

The aircraft had accumulated 50,632h and 8,120 cycles at the time of the accident, according to the NTSB. 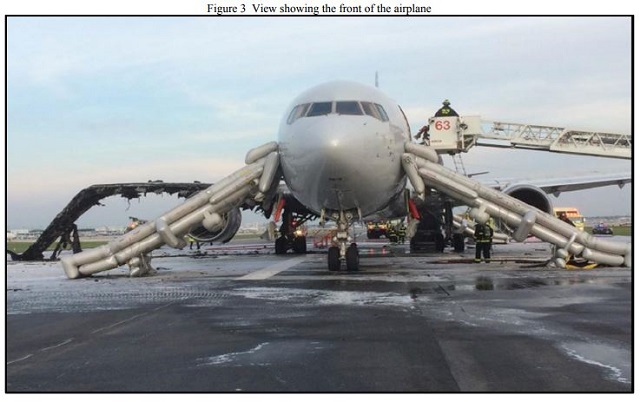 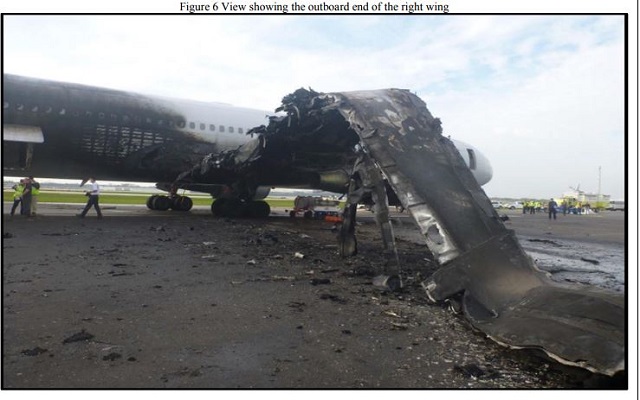 The disk failure sent disk, blade and vane fragments through the engine's high-pressure turbine case and its nacelle, and through the wing.

Debris punctured the wing's "dry bay" – a fuel-free area above the engine that is surrounded by fuel tanks. The dry bay is intended to minimise risk that fuel will spill onto hot sections of the engine in the case of an engine failure, NTSB documents show.

However, the dry bay does contain the engine's main fuel line, and debris punctured that line during the American uncontained failure, according to the NTSB.

A metallurgical examination of disk pieces found that cracks had developed in the disk from an "anomaly" under the surface of the disk, NTSB documents show.

Though only the stage two high-pressure turbine disk failed, GE's service bulletin recommends inspections of both the first and second stage disks because they have "similar stress/volume characteristics", says the NTSB.

A Houston company called Wyman-Gordon forged the stage two disk using the alloy "Inconel 718", which was supplied by ATI Specialty Materials, according to the NTSB.

Since GE introduced Inconel 718 components in the 1970s there have been nine cases in which the components have cracked or burst, though the American CF6 failure has been the only commercial aviation failure, the NTSB says.

It adds that GE determined that Inconel 718 components produced after 2000 had "noticeable improvements in product cleanliness".