Germany is proposing that 22 NH Industries (NHI) NH90 troop transport helicopters it currently has on option could be acquired and used to form a pool of rotorcraft to be shared by NATO partners.

The concept, which it calls the “multinational helicopter unit”, is part of a broader framework agreement the nation’s defence ministry hammered out with Airbus Helicopters as it looks to formalise planned cuts to its overall NH90 order.

Berlin initially committed to 120 NH90 TTHs, but in 2013 it concluded a memorandum of understanding with the airframer – which is the majority shareholder in the NHI consortium – to cut its acquisition to 80 units with 22 options. In addition, it proposed to take 18 examples of the NFH variant for use by its navy.

However, formal ratification of the deal was put on hold pending the conclusion of negotiations between the parties.

The pact must now pass before Germany’s parliament for approval before a binding contract can be signed.

Defence officials hope this can be debated by politicians either later this month or in January, leading to a firm decision in early 2015. 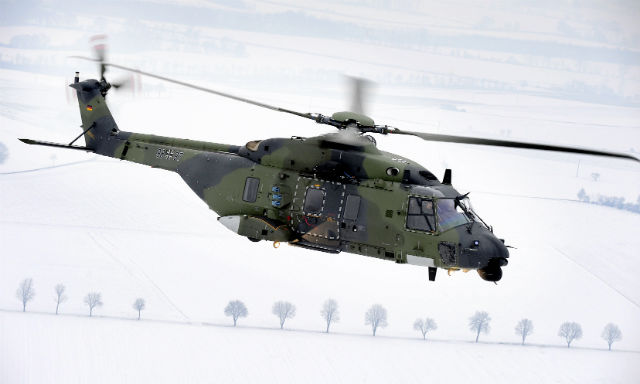 The ministry says the shortage of transport helicopters that afflicted the NATO-led International Security Assistance Force mission in Afghanistan was in part the inspiration for its plans for the shared resource.

“By doing this we create an opportunity for smaller countries, which would not be able to support an NH90 fleet on their own, to participate in this capability and have it on a smaller scale,” the ministry says.

So far Berlin has made approaches to 20 NATO members, and has received a “two-digit number of positive responses”, the ministry says.

It proposes making a “significant contribution” to supporting the pooled helicopters, which would be located at one of the German army’s existing bases for the type, enabling them to take advantage of the maintenance and logistics facilities already in place.

Germany has so far taken delivery of 37 NH90s, with the latest example handed over last week. It has yet to declare full operational capability for the helicopter, with this milestone anticipated in late 2016.

If approved, the NFHs – to be known as Sea Lion in German service – will begin to arrive from 2018 to replace the navy’s aged fleet of 20 Westland Sea King 41s.

As part of the same pact, Airbus Helicopters will now no longer buy back 11 early production examples of the Tiger UHT attack helicopter. Instead, Germany will retain them to use as donor aircraft for spare parts and cancel a separate spares acquisition.

Berlin has cut its order from 80 to 57 of the helicopters, with the operational Tiger fleet capped at 40 examples.

The defence ministry declines to give a figure for the total acquisition cost, but it is thought to be in the region of €8 billion ($10 billion).