For months, US Air Force officials have used the adjective “hard” to describe their decision to ground entire fleets of aircraft in response to budget cuts.

But on 23 April, USAF chief of staff Gen Mark Welsh says a review of the service’s options showed “very clearly” that grounding its Fairchild Republic A-10s is the right choice.

Speaking at a National Press Club event in Washington, DC, Welsh says the service evaluated a number of cost-cutting options against a “very detailed operational analyses” before making decisions.

“We came very clearly to the conclusion that of all those horrible options, the least operationally impactful was to divest the A-10,” Welsh says. “It makes perfect sense from a military perspective if you have to make these kind of cuts.”

The service’s fiscal year 2015 budget proposal, which requires Congressional approval, proposes grounding all of its roughly 300 A-10s at a savings Welsh estimates to be $4.2 billion through fiscal year 2019.

The service has said other aircraft can fill the A-10’s close-air support mission, including Lockheed Martin F-16s and F-35s. 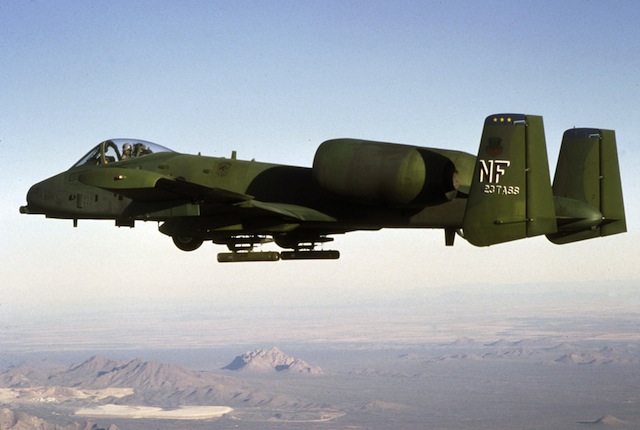 The USAF also considered deferring more planned orders for Lockheed Martin F-35As, but Welsh says that option would drive up the cost of the programme. He adds that the service intends to continue funding other next-generation programmes like the Boeing KC-46 tanker and the long-range strike bomber programme.

Another choice was to cut the fleet of Boeing F-15C fighters beyond the current 51 aircraft on the chopping block.

“We are cutting F-15Cs, but we can’t eliminate the entire fleet or we can’t do the air superiority mission,” he says.

Reductions in funding for intelligence, surveillance and reconnaissance (ISR) missions and for the service’s air mobility fleet were also considered, but Welsh says those missions already face a budget shortfall.

Also on the table: grounding the entire fleet of McDonnell Douglas KC-10 tankers.

“Without the KC-10s, you could [do the job] but it would be ugly and you would not have any flexibility whatsoever,” Welsh says. “The impact of that was simply too big on all the services.”

The same savings could be achieved by cutting three times as many Boeing KC-135 tankers.

“If you take three times as many KC-135s, you flat can’t do the job,” according to Welsh.

But Welsh says the USAF is the only service that can provide command and control on a “theatre scale”, and he says the US needs 80 to 100 strike platforms in the event of a large-scale war.

“That’s about how many we have today. They are aging, but we have the right number,” according to Welsh.

The USAF has created a transition plan that Welsh says would move other “hardware” into units that currently fly A-10s, but he did not elaborate.

“If we don’t divest the A-10s from those units, the plan will come unraveled…and we will start the planning over again,” he says.