AgustaWestland will fly the third prototype of its AW609 tiltrotor late this year as the manufacturer accelerates testing activity ahead of planned certification in 2017.

Two flight-test articles dating from the early days of the programme, then a joint development with Bell, have been used for the validation campaign so far and have amassed 1,300h, alongside 300h of ground runs.

But with the initial aircraft "now reaching the end of its useful life", according to Paul Edwards, experimental test pilot at AgustaWestland, the arrival of two subsequent prototypes is required to attain US Federal Aviation Administration (FAA) approval.

Prototype three is "in final build" at the manufacturer's plant in Vergiate, Italy, he told a conference on future rotorcraft on 14 September. It will be transported to its Philadelphia, Pennsylvania facility – the location of the tiltrotor’s eventual final assembly line – late this year, to be used for icing trials and then cold weather testing.

The fourth flight-test article, which will have the production standard cockpit installed, is also being produced in Philadelphia.

Service entry is scheduled for 2018, says Edwards, and he anticipates rapid take-up of the Pratt & Whitney Canada PT6-powered type.

"This aircraft is going to be part of the aviation fabric far more quickly than a lot of people realise," he says. 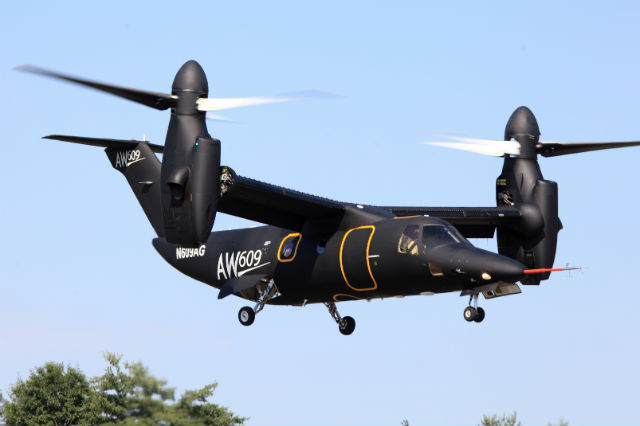 With no certification standard existing for the tiltrotor, AgustaWestland has worked with the FAA to develop hybrid rules – the Powered Lift Certification Requirement – that draw on regulations from both the fixed- and rotary-wing worlds.

These involve proving that the aircraft can perform both gliding and autorotation landings in the event of engine failure, as well as rapid reconversion from forward flight, and flare before touchdown.

So far, 28 power-off reconversions have been performed, says Edwards, although he cautions that it has yet to pass certification trials for the engine-out state.

Edwards says the evaluations have also dispelled the view that tiltrotors are particularly vulnerable to vortex ring settling.

"Tiltrotors are not susceptible to vortex ring," says Edwards. "We had to try really hard to get there."

"It was about to fly itself out when we applied the recovery technique. Both rotors are not going to enter vortex ring simultaneously – it slides sideways to get itself out."

Describing the AW609’s capability, Edwards highlights toa recent flight he performed from Yeovil in the UK to Cascina Costa in Italy. The 627nm (1,160km) sector was completed in just 2h 18min, albeit with a “strong tail wind”.