The US military has conducted joint operations in the Arabian gulf to demonstrate army attack helicopters teaming with naval assets to engaged simulated surface targets.

The work involved the army’s Boeing AH-64E attack helicopters operating from the USS Lewis B Puller, an Expeditionary Sea Base ship, says the US Naval Force Central Command. 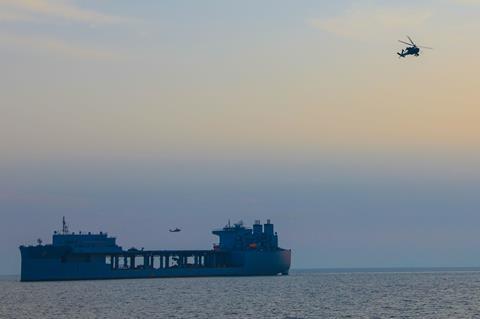 The activity involved naval vessels, including patrol boats and a destroyer, identifying simulated surface targets that the Apaches then engaged.

“The integration of US Army air weapons teams with other joint fires into the maritime environment greatly enhances our ability to expand reconnaissance and attack capability,” says Captain Peter Mirisola of the US Navy.

“The Apaches, in coordination with our surface ships, allow us to hold an adversary at high risk at extended ranges. Combined with other joint fires, these aircraft significantly increase the precision lethality of our joint maritime forces.”

Central Command notes that there is a historical precedent for the work. In 1987-1988 US Army MH-6M Little Bird helicopters supported naval operations against Iran in the Persian Gulf.

In March, a similar effort in the Arabian Gulf involved US Navy assets identifying simulated targets for engagement by a US Air Force AC-130W Stinger II gunships.

“Working with [US Army Central Command] forces represents another key capability in our ongoing integration of naval and air assets across our joint and coalition force to ensure maritime superiority,” says Vice Admiral Jim Malloy

“This kind of cross-domain integration allows us to maintain highly lethal and effective defensive capabilities, regardless of what platforms are operating in theater.”

Swarms of small boats operated by Iran are a concern for the US Navy, particular in the tight confines of the Straits of Hormuz and in the Persian Gulf. Periodically, footage has emerged of such vessels shadowing American warships.