Airbus Helicopters plans to deliver the first upgraded H225 heavy twin to launch customer Lease Corp International in early 2017, but has dropped an uprated engine from the package of enhancements and scaled back a planned weight increase.

Launched in February 2014 as the EC225e, the helicopter was due for certification in late 2015 and was intended to use a new variant of the Turbomeca Makila powerplant, the 2B.

This promised a payload boost of 550kg – bringing the H225’s maximum take-off weight (MTOW) closer to that of the rival Sikorsky S-92 – and allowing a radius-of-action increase by 50nm (92km) with 19 passengers, or by 300nm with 10 passengers and an additional fuel tank.

However, faced with an oil and gas market in crisis, Airbus Helicopters late last year took the decision to ditch the new engine on cost grounds, instead relying on the current Makila 2A1.

It believes sufficient performance gains can be achieved using other elements of the enhancement package, without requiring work to integrate a new powerplant.

Turbomeca says it has now frozen development of the 2B variant, despite flight tests having begun in 2014. It featured a new combustion chamber and high-pressure turbine blades for increased take-off performance and payload capability.

As a result of the decision, MTOW on the H225 will now increase to 11,160kg (24,600lb) – a rise of just 160kg over the previous figure – still allowing the optional installation of an extra fuel tank. 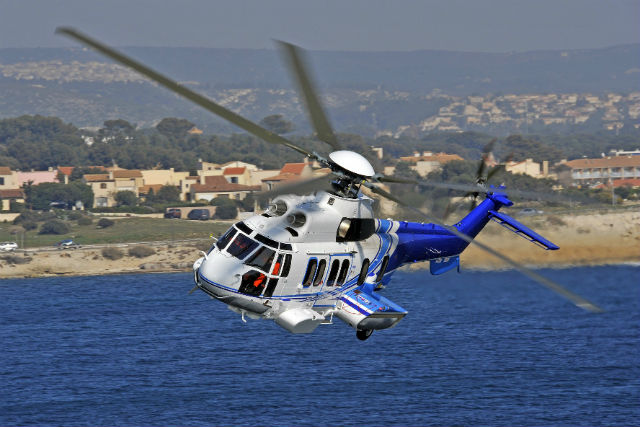 That maintains the proposed radius-of-action increase with 10 passengers, although with 19 passengers Airbus Helicopters simply says it allows around 20min of additional flight time.

The airframer is still proceeding with an avionics upgrade for the type, however. A key element of that – available as an option for oil and gas operators – is its new Rig 'N' Fly system, that allows automated approaches to offshore platforms.

This has now gained certification from the European Aviation Safety Agency and will also be available on the H175 from end-2016, and the developmental H160.

Marie-Agnes Veve, head of the H225 programme, says: “With the Rig 'N' Fly, almost the entire approach procedure is automated, a key element in ensuring that our customers have the right technologies for safe, smooth and efficient flights.”