Airbus Helicopters has performed the first flight of its new DisruptiveLab technology demonstrator that will test a host of new technologies designed to cut carbon emissions by up to 50%. 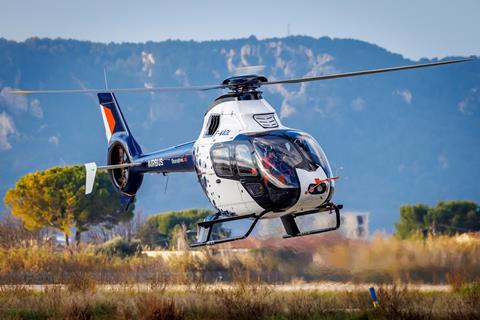 Although ground testing began late in the year, the all-new single-engined demonstrator (F-WADL) did not make its maiden sortie until 13 January.

Video footage released by Airbus Helicopters shows the aircraft performing a series of low-level hovering manouevres at its Marginane facility in the south of France. The flight lasted for 44min, says the manufacturer.

Technologies under evaluation include a redesigned rotor head, an aerodynamically improved composite and aluminium fuselage, a slimline tail boom designed around a maintenance-free fully enclosed transmission, and a smaller and lighter Fenestron shrouded tail rotor.

Additionally, the DisruptiveLab is fitted with a parallel hybrid-electric drive system which is capable of recharging the batteries during in flight. Airbus Helicopters has yet to disclose which company has supplied the hybrid drivetrain.

This story has been updated with additional detail in the fourth paragraph.