Airbus Helicopters will work with 20 partners to support its H145M pitch for an Australian special forces requirement.

The company dubs the collection of companies “Team Nightjar”, and estimates that if the H145M wins the Project Land 2097 Phase 4 competition it will provide A$250 million ($174 million) of local economic benefits, and provide 170 local jobs. 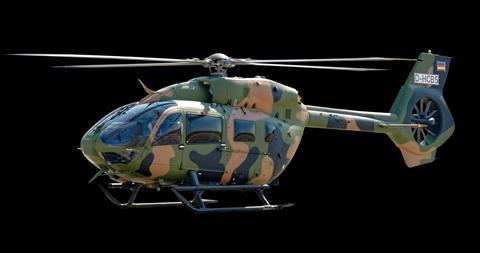 Airbus Helicopters has previously stated its intention to pitch the H145M for the 20-rotorcraft requirement, which first emerged in Canberra’s 2016 defence white paper. The project was subsequently detailed in a 2018 request for information (RFI).

“The H145M that we are proposing is the latest member of the H145 family, which has flown over 5.9 million hours with more than 1,400 aircraft in service globally across civil, parapublic and military domains. It is well supported by a mature global network.”

The company adds that Germany already uses the H145M for special forces work.

Rivals for the requirement include the Bell 429, which two local prime contractors, Babcock Australia and Hawker Pacific, are pitching in separate bids. The project has attracted interest from Boeing with the AH-6I Little Bird and Leonardo Helicopters.

According to the RFI, the Department of Defence wants in-service helicopters – both commercial and military platforms – “optimised for dense urban environments”, which can be deployed by Boeing C-17 strategic transports.

“Australia’s smallest nocturnal bird of prey, the nightjar’s characteristics include agility, stealth through its compact size, excellent camouflage, silence in flight and non-reflective eyes,” adds Airbus Helicopters on a special web site for the competition.

“The nightjar is known to hunt in pairs, and catch prey on the wing, combing its heightened senses, agility, speed, power and focus – characteristics which are critical for special operations.”