Airbus Helicopters has applied for a patent covering a proposed emergency battery system for single-engined rotorcraft.

Designed to maintain rotor power in the event of an engine failure, the system will aid pilots in performing safe autorotation landings, according to a European Patent Office filing published in June. 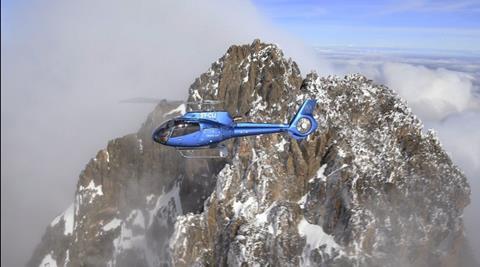 System will be tested on H130 next year

That chimes with plans previously disclosed by Airbus Helicopters, which next year intends to test a back-up system aboard an H130 light-single to provide 2min of emergency power.

Broadly comprising a battery pack and electric motor connected to the main gearbox, it also includes sensors to enable a rapid detection of a drop in rotor speed indicative of an engine failure and then activation of the back-up system.

Noting the heavy workload faced in the crucial moments following engine failure, the filing says that without quick action the rotor speed will decay and the helicopter crash.

It says that in addition to safety benefits, the back-up system would alleviate certain operational limitations imposed on single-engined helicopters, particularly a European ban on the overflight of larger built-up areas.

Also, maximum take-off weight could be increased, given the additional safety margin provided, says the filing.

The system would enable detection of an engine failure “before it is too late”, says the filing, almost instantly providing back-up power to assist with the autorotation and, at the point of landing, to aid the speed reduction required to avoid a “very heavy contact with the ground”.

Sensors to enable rapid detection of an engine failure could monitor numerous parameters, including rotor or engine RPM, alongside temperature or pressure.

However, the application notes that the detection system must be sophisticated enough to distinguish between a genuine engine failure and stages of the flight where rotor speed may naturally fall anyway, “limiting the risk of detecting a non-existent failure”.

Additionally, the helicopter pilot should be able to either disarm the system - to perform certain training missions, for instance - or to turn it off once activated.

The filing points out that the size of the system is limited by a requirement not to add significant weight to the aircraft.