Romania's aircraft manufacturing industry, dormant since 2004, is being revived by Airbus Helicopters, which is to begin production of its legacy Super Puma models at a new facility near Brasov.

The airframer currently assembles the AS332 L1e and C1e variants – from today redesignated as the H215 – at its Marignane plant in the south of France. But from 2017, production of the 8.6t maximum take-off weight helicopter will progressively begin at the new factory, reaching full-rate production of 15-20 aircraft per year from 2019. Initial deliveries in 2017 will be confined to the short fuselage (C1e) model, with the 76cm-longer variant added from 2019.

It faces competition from the Mil Mi-8/17, but believes that the new production system it is adopting at Brasov – arranged around a flow line – plus lower Romanian labour costs, and a simplified configuration of the baseline helicopter will enable it to successfully compete against the Russian-built type.

"It brings to the market what the market needs for this segment," said Guillaume Faury, Airbus Helicopters chief executive, speaking at an event to mark the start of construction at the site. "Thanks to this new streamlined industrial model, we will be able to produce one of the most affordable heavy helicopters in the world here in Brasov," he adds.

The airframer had already began taking steps to simplify its Super Puma models, with the 2010 launch of the C1e being a step towards that goal. The variant features a stripped-down baseline configuration and a reduction in the amount of factory-installed equipment available, while gaining the four-axis autopilot and avionics from the heavier H225.

Production time on the C1e was already three months shorter than the 21 months required for the previous iteration, but Airbus Helicopters believes further simplification of the configuration and the new production line can cut it to 11 months in total. 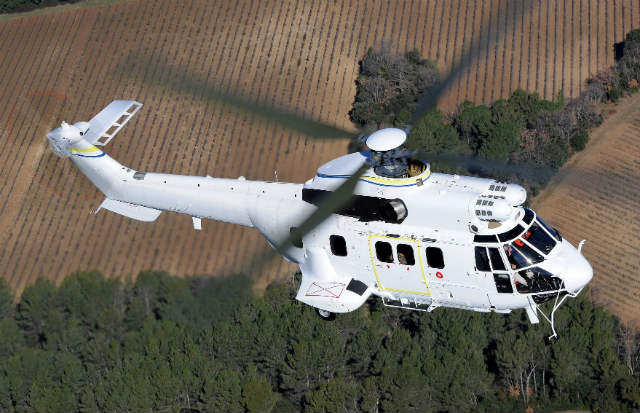 The airframer is investing €50 million ($53.2 million) in the purpose-built, 10,000m2 facility, which will be operated by a new company, Airbus Helicopters Industries. It has had a presence in the central European country since 2002, with Airbus Helicopters Romania (AHR) – a joint venture with state-owned aerospace company IAR – developing a successful maintenance, repair and overhaul business.

However, the new entity is 100% owned by Airbus Helicopters, "because we wanted to be in full control of our future," says Fabrice Arfi, vice-president of business development.

The new facility will provide work for 300 people, in addition to the 160 employed at AHR, with an initial cadre of 23 already receiving training in Marignane.

And, says Faury, the decision to build the H215 in Romania will "develop the supply chain and the network of companies supporting us".

Arfi believes it can achieve 30-35% Romanian content on the helicopter – including the value of labour – within five years. It is already working to secure its local supply chain, he says, with contracts to be signed next year.

He is confident that major suppliers to the programme can be encouraged to move to Brasov, including potentially engine manufacturer Turbomeca, which provides the H215's twin Makila 1A1 engines.

Aside from the benefits for H215 production, the creation of the line at Brasov will allow Airbus Helicopters to free-up valuable space at its Marignane site for the assembly of its H175 super medium and developmental H160 medium-class rotorcraft.