Airbus Helicopters insists its offer for the US Navy's TH-XX trainer contest provides the "lowest risk" of any bid, despite proposing a twin- rather than single-engined rotorcraft.

The navy's Request for Proposals (RFP) is "engine agnostic", and the airframer is bidding its H135 light-twin for the 130-unit competition to replace the navy's fleet of legacy Bell TH-57 Sea Rangers.

Company executives emphasise that the navy's evaluation will be more focused on the technical merits of each proposal, rather than simply cost.

"We can offer the lowest risk here. If it was more driven on a commercial basis it might be different, but we are sure that we are making with the H135 the best offer, and best platform to train the future students for the navy," said Martin Schneider, vice-president and H135 programme director, speaking during a briefing at the manufacturer's Donauworth, Germany site.

The H135 already meets one of the contest's key requirements thanks to its instrument flight rules (IFR) certification from the US Federal Aviation Administration.

Rival Leonardo Helicopters is proposing the TH119 light-single – a military derivative of is AW119 – which it has frequently touted as the simplest solution.

However, the AW119 does not currently have IFR certification, although this is being sought by the manufacturer. That constraint also applies to Bell's likely offer, the 407 light-single, although it could potentially pitch the IFR-qualified twin-engined 429 instead.

But Schneider says the need for additional certification work by its rivals represents a "big development schedule for others", adding an element of risk to their proposals. 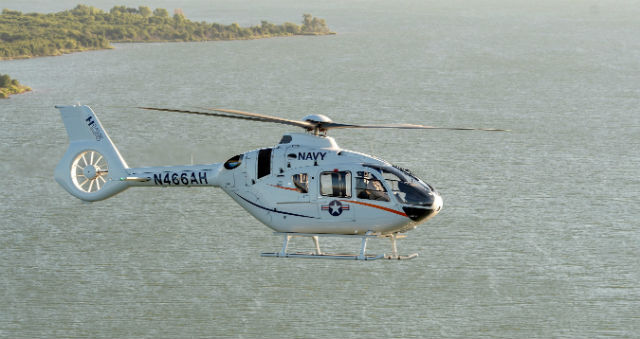 The navy intends to witness performance demonstrations of the competing helicopters in April or May, leading to a contract award around six months later; deliveries are due to run over four years, beginning in fiscal year 2021.

If it wins, Airbus Helicopters will build the H135s at its facility in Columbus, Mississippi where it currently builds UH-72A Lakotas for the US Army, as well as H125s for the civil market.

"We intend to industrialise the product in Mississippi. We have done all the homework on how that works and taken the initial decisions to prepare for the ramp up," says Scott Tumpak, head of governmental programs and contracts, Airbus Helicopters Inc.

"We are positioned to meet [the navy's] schedule at very low risk."

Tumpak also argues that the flight-hour cost of the H135 is "pretty attractive" when compared with "at least one of our single-engined competitors".

However, there is one performance criterion where Airbus Helicopters seems less assured. Auto-rotation landings to the ground are notoriously expensive in twin-engined helicopters due to their higher weight and consequent wear and tear on the platform.

Since the US Army adopted the Lakota as its training platform it has removed the requirement from its syllabus, but Tumpak declines to comment if the navy can be persuaded to follow suit.

H135s have previously been selected for military flight training by Australia, Germany and the UK.