Airbus Helicopters is hailing the success of a research project that has enabled for the first time the manufacturer to gather data on the stresses experienced by main rotor blades while they are in motion.

While the measurement technology has yet to be flight tested, the airframer believes that it could ultimately enable the live capture of data relating to the forces exerted on the blades, potentially warning pilots of a safety issue, or even feeding back into the flight-control system. 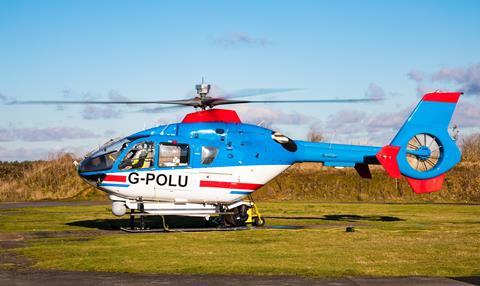 Conducted in collaboration with Cranfield University and other industrial partners, the four-year BladeSense project saw fibre-optic instrumentation installed on two of the four main rotor blades on an H135 light-twin (G-POLU); the remaining blades were fitted with dummy equipment to ensure dynamic balance.

Data was transferred to a remote ground station located 60m (196ft) from the aircraft through a wi-fi link from specially designed instrumentation mounted atop the rotor hub.

With the rotors spinning at 400rpm, a total of 4h of ground runs were performed – 2h to capture data on deformation and a further 2h for strain measurement, says Simone Weber, technology integration manager at Airbus Helicopters in the UK.

In addition, during the testing, inputs from the collective and cyclic controls were added – each was repeated nine times – “so we could see frequencies other than rotor harmonics”, says Weber.

While the effort was a “proof of concept”, Weber is hopeful that a second phase, “BladeSense 2” can be launched next year, which would eventually include flight testing the technology and taking it to technology readiness level 6 – one stage prior to industrialisation.

Weber says that the BladeSense system could allow live monitoring of the rotor blades while in operation as an added safety feature. 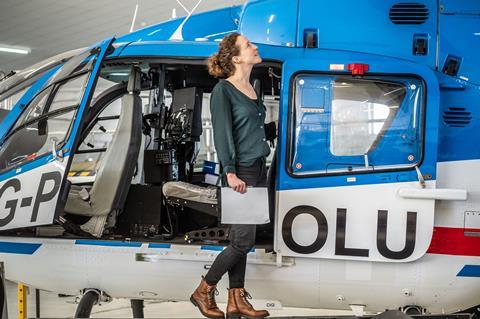 “If the pilot pulls the flight controls really hard the blades could be overloaded – the data would pick up that exceedance,” she says. In addition, live data could be used by the flight-control system.

Data gathered by the project “matched reasonably well” modelling carried out by Airbus Helicopters as part of existing blade research but which it has never previously been able to measure, notes Weber.

“It is still amazing that after all these years and with all the technology we have had available, there was nothing that existed to measure the data like that.”

In addition, the ability to accurately measure the strain and deformation of a rotor blade could in future feed into the design process, allowing the manufacturer to optimise the shape of a blade to reduce drag or weight.

While the trial saw the sensors attached to the surface of the rotor blade, any production version would require them to be integrated within the blade’s composite material, which presents future challenges to industrialisation, says Weber.