Airbus Helicopters is hopeful that a pair of development contracts will be signed off shortly allowing it to begin work on two key military programmes.

Go-ahead for development of the H160M Guepard by France is likely to be received first, with the manufacturer still confident of sign-off by year-end. 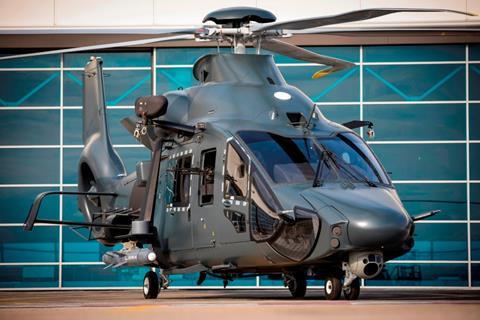 France intends to acquire 169 examples of the medium-twin for operation by all three branches of its armed forces; deliveries are due to begin in 2026.

But Airbus Helicopters believes there is an export market for around 400 units, Louvot said during the manufacturer’s Trade Media Briefing on 30 November.

So far the 6t-class H160 has achieved European civil certification but has yet to enter service.

Nonetheless, Louvot is confident that military operators will benefit from the autopilot and low fuel consumption of the commercial variant.

Separately, the airframer is waiting on a tripartite agreement from France, Germany and Spain to greenlight work on the Tiger MkIII upgrade.

Louvot says this is anticipated soon as the three countries work through the final details of the contract. But there has been some progress on agreeing common elements for the enhancement.

“The versions will diverge somewhat – they are not exactly the same – but there is a very large degree of convergence; a lot of the systems are common,” he says.

“There is a great dynamic to capture the benefits of similar configurations – there is way more commonality than we could have expected.”

Louvot says that full operational capability for the new helicopter could be achieved by the end of the decade provided the contract is signed off shortly.

“It will offer the latest capabilities on one of the most agile and survivable platforms,” he says.

Meanwhile, the airframer is waiting for indication from operators of the NH Industries (NHI) NH90 if and when a mid-life update of the 11t-class helicopter is required.

“It is up to the nations to decide,” says Louvot. “But it is not clear yet if there is a requirement.”

While the airframe “can easily last 50 or 60 years”, avionics and mission systems in particular will eventually need modernising, he believes.

Airbus Helicopters holds a majority share in the NHI consortium alongside Leonardo Helicopters and Fokker.