Airbus Helicopters has performed the first flight of a helicopter with 100% sustainable aviation fuel (SAF) powering one of its two engines.

Departing from the airframer’s site in Marignane in the south of the France, the H225 heavy-twin ran one of its Safran Helicopter Engines Makila 2 powerplants on SAF derived from used cooking oil. 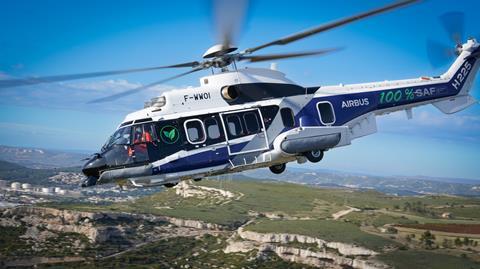 The sortie marks the start of a flight-test campaign to assess the impact of unblended SAF on the helicopter’s systems as it seeks to certificate percentages in excess of the current 50% limit.

Airbus Helicopters has additionally launched a SAF user group to drive its adoption. The manufacturer has also started using the fuel for training and test flights at its French and German sites.