MBDA has detailed a successful first test firing of its helicopter-launched Sea Venom/ANL anti-ship missile, in development for France and the UK. 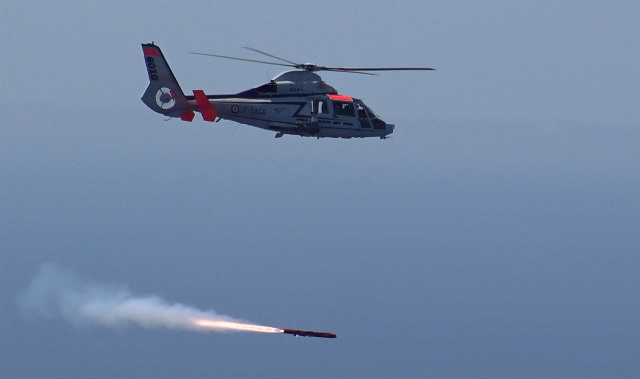 "The next step is to exercise the system's operator-in-the-loop capabilities," he adds. The new weapon has a two-way datalink installed, which will allow a crew member to view seeker imagery to support "in-flight retargeting, final aim-point correction and refinement, or safe abort", according to MBDA.

The imaging infrared seeker-equipped Sea Venom/ANL has a launch weight of 100kg (225lb), including a 30kg warhead optimised for use against light maritime vessels such as fast attack craft and corvettes. It will replace the MBDA-produced AS15TT and Sea Skua missiles currently carried by French navy and UK Royal Navy rotorcraft.

MBDA programme head Frank Bastart describes the first firing as "a complete success", and notes that once operational, the weapon will provide a "major increase in capability" for the partner navies.

The French navy's AS565 and NH Industries NH90 platforms are potential candidates to receive the ANL, before the introduction of its future hélicoptère interarmées léger – a development of Airbus Helicopters' H160. The RN will introduce the Sea Venom with its Leonardo AgustaWestland AW159 Wildcats.