Airbus Helicopters has ended test flights of its Bluecopter eco-demonstrator having successfully validated a number of technologies to cut fuel burn by 12-15%.

However, trials of single engine operation (SEO) – which promised a further 25% improvement in fuel consumption – have been pushed into next year due to an unexpected level of complexity with the initiative.

The airframer unveiled the European Commission-backed programme during the summer. The programme took an early prototype of Airbus's EC135 light twin (D-HEXE) and added new features including enhanced rotor blades, a next-generation Fenestron shrouded tail rotor, and an active rudder, all of which are designed to cut fuel consumption, CO2 output and noise emissions.

But the biggest gains were promised by SEO, or the ability to shut down one of the two engines in the cruise phase of flight.

However, Marius Bebesel, director of the programme, says the challenge of adding control software to the avionics and FADEC engine systems proved “rather tricky”.

“That is why we are a little bit delayed. We will probably continue these SEO measurements next year, but they will not be directly in the frame of the Bluecopter project,” he says. 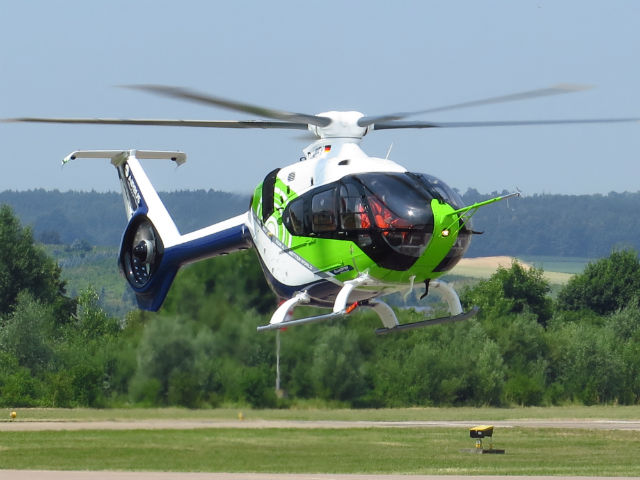 That programme effectively finishes at year-end, he says, with the demonstrator having amassed around 65 flight hours.

Instead, test flights are likely to resume in mid-2016 using the same airframe, but with the addition of the SEO system, alongside new engine side inlets and improved main rotors.

Bluecopter was fitted with a five-blade system using longer, hockey stick Blue Edge-style blades. However, Bebesel declines to reveal what the next iterative development of the rotors will look like.

Additionally, any future tests of SEO will be conducted with an engine manufacturer, says Bebesel. Although the Bluecopter demonstrator is powered by twin Pratt & Whitney Canada PW206 turboshafts, he says there was “no real co-operation” on the initiative with the propulsion specialist.

“But the next step will be to go for co-operation with Pratt & Whitney [Canada] or [alternative supplier] Turbomeca or both on the topic,” he says.

The main challenge will be to define with operators what level of complexity they require from the system, particularly around restart of the shut-down engine.

A powerful restart generator, allowing the engine to be brought back up quickly, would incur a “cost and weight penalty” compared with a simple switch, Bebesel says, but could be used in a “bigger window” of the flight profile, he says.

The Bluecopter initiative’s second goal was to reduce noise emissions by a cumulative 30dB, and although it hit its targets in the take-off and landing phases, where it is “world champion” says Bebesel, further work is required for the fly over element of trials, where the “results were good, but we expected even better”.