Canada will spend over C$1 billion ($730 million) to upgrade its fleet of Leonardo Helicopters CH-149 Cormorant search and rescue rotorcraft, enabling their operation until at least 2042. 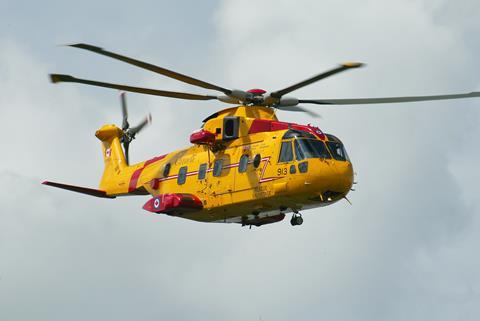 In the latter case, that will comprise parts in storage from the existing CH-149s and those salvaged from the nine AW101-based VH-71 Kestrel airframes acquired from the USA in 2009 following that programme’s cancellation.

Recycled components will include transmissions, landing gears and control surfaces “to reduce costs and ensure value for money”, says the DND.

Under the MLU, the CH-149s will be raised to the same standard as currently being delivered to Norway under its AW101 ‘SAR Queen’ acquisition.

To be led by the manufacturer, the modernisation will be performed by the Team Cormorant grouping, which also includes IMP Aerospace and Defence, GE Canada and Collins Aerospace Canada. Most of the work will be performed in Canada, primarily at IMP’s facilities in Halifax, Nova Scotia. The DND values the upgrade work at C$1.16 billion.

CH-149 Cormorants are based at 19 Wing Comox, 9 Wing Gander, and 14 Wing Greenwood; the additional aircraft will enable a return to 8 Wing Trenton.

In a related deal, the DND has awarded Canadian training provider CAE a C$78 million contract to supply a flight simulator that will be “representative” of the modernised fleet.

To be located in-country, the DND says the solution will remove the need for RCAF crews to “travel to the UK to train on simulators that may not be consistent with our aircraft”.